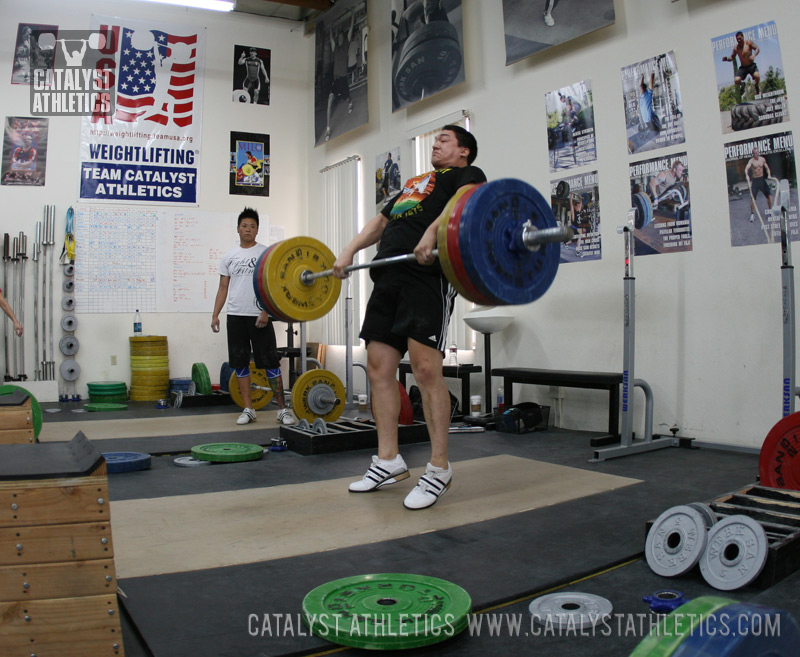 Josh Asks: What changes, mainly in the starting positions of the lifts, will people with long legs/short torso have to make compared to people with short legs/long torso? To what extent will these variations alter the execution of the lifts as well?

Similarly, if an individual has an excessively large stomach, clearly the bar path won't be as vertical because the bar must travel around their gut. Aside from the obvious (losing weight) what tweaks can I make as a coach to help someone in that situation still train the O-lifts as effectively as possible?

Greg Says: Regarding the starting position, changes will not necessarily need to be made. Usually the issue becomes one of needing greater hip flexibility to allow the back to be set in the proper arch. The lifter’s trunk will be unavoidably leaned farther over, i.e. smaller angle relative to the floor, but the actual relationships of the barbell to the foot and the shoulder to the barbell can almost always be kept the same. This assumes we’re talking about someone who is not of extraordinary height; once you start getting significantly above six feet tall, the starting position can be very problematic. But as an example, I have a 6’ 4” athlete who starts in a good position and is able to navigate the bar past the knees with good posture.

The main difference you’ll see with longer legged lifters in the early phase of the lift is a greater tendency for the knees to extend at a faster rate than the hips, i.e. the hips will rise faster than the shoulders and the bar. This movement is not necessarily problematic if it’s minor and controlled, and it some cases, it will be necessary to get the bar past the knees. Some of this can be helped by making sure the knees are pushed out to the sides in the start and first pull to get the knees back without needing to drop the shoulders and lift the hips. A wider stance may be helpful as well. Also ensuring the athlete is developing adequate strength to lift the bar in the desired posture through upright squatting and pulling strength work will help prevent unwanted or more dramatic shifts in back angle.

Regarding lifters with large guts, it’s less of an issue than you might imagine. Watch superheavyweights lift and you’ll notice that they have no problem keeping the bar in close. When you extend the body aggressively in the pull, much of that body mass moves up and somewhat out of the way rather than hanging down as it does when the individual is standing at rest. There is also the rearward lean of the trunk in the finish position that moves the abdomen back farther. Additionally, if that mass is largely adipose tissue, the bar can easily compress it as it comes into the body. Finally, the bar needs to be kept as close to the body as possible; if the body is bigger, that doesn’t mean the bar needs to be farther away from it. It’s just farther away from the skeleton as it would be in a thinner athlete.

Watch this video of Viktors Scerbathis snatching and you can see an example.

Flex
Thats good greg! I have the "long femur, short torso" body and have adapted by flaring my knees out quite wide in the initial position. Also snatch pulls off risers etc although its still can be tougher on cleans as I can't get my knees wide
Josh Earleywine
Thanks Greg. I appreciate the response. I think upon further review the main thing is making sure that the hip and ankle mobility is adequate to accommodate the longer femurs, as you said. Thanks again for answering.
Lucas
I am 6'10 with fairly long femurs. While I do not regularly do the olympic lifts, I did find it problematic to set up for the deadlift initially. I found a wider stance helped dramatically. Loved the article
Tom
Great feedback.
I'm in the same situation, long femurs pushes the bar out with the knees. I'm flaring the knees out which helps but my torso is still leaned over and never end up getting my shoulders over the bar.

Greg do you think raising my heels further in the start would help keep me more upright ? That way I won't be too far over the bar ?

Your advice is much appreciated!

Greg Everett
Tom -
I would have to see - possibly it would, but it could also create new problems
Post a photo or video on our forum if you can.
Sean
Greg, do athletes with short legs and a long torso have a marked advantage starting out then or do they have other concerns to worry about?
Greg Everett
Sean -

Short legs means better leverage in squatting movements, which is why short-legged athletes are typically stronger squatters and cleaners than longer-legged athletes. But they also tend to not be as good at snatching, so it can be a trade-off. You wouldn't really train them fundamentally differently than anyone else--everyone should be training in a way that addresses their own individual strengths and weaknesses.
Karina
I usually dont mention this because it sounds like a joke or something, but a big chest in women may alter the path a bit too. In the clean I hit myself in the chest a few times. I know that I learned to manuevre around it though. Not sure to what extent it impacts my lifts though.
Jaime
Couldn't agree more with the gut issue. I was concerned about that as I was lifting during my pregnancy (with mds blessing). But my extension just got a bit further back. Bar stayed close (never hitting the belly), and I was able to lift competitively 6 months in. Now that I'm not pregnant, there is still no issue with keeping the bar close. It felt as if it had more to do with Lat activation, than trying to go 'around' something.
nicki
following on from Karina - i agree that chest in women sometimes gets in the way - when i try to keep the bar close i sometime catch my breasts on the way up - i have recently got a size smaller crop top to help smooch them flatter, which has helped to a degree but can still be an issue