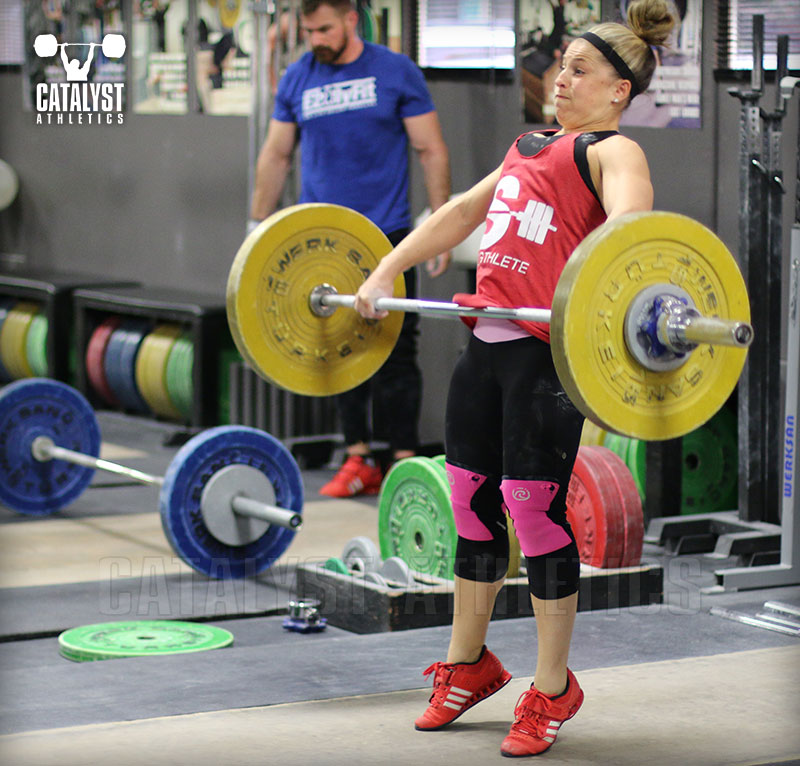 Last weekend Catalyst Athletics relocated to a new facility directly across the parking lot from the old place. The changes were minor. The warehouse is on the correct side of the building to accept book dump offs, the clock is at the front (which confuses Aimee three times per hour), there's more light inside, and it's a little bit bigger. With that extra square footage came four additional platforms, making ten total.

In order to make things fit, the four new platforms, which will be used for group weightlifting classes, are spaced closer together. As a member of the group classes, I told Greg today that they seemed a little close, and that I can foresee two neighboring beginners killing themselves by doing something stupid. His response can best be paraphrased as "People need to learn to lift safely. At Mike's Gym there are four platforms packed into a garage. One sometimes had a motorcycle on it, and there were dogs running all over the place. No one ever got hurt". My initial reaction was skepticism but I slowly warmed up to his train of thought.

Catalyst is located in the heart of Silicon Valley, and as such, I suspect many patrons have undoubtedly seen the Google self-driving vehicle on a commute up or down 101. It's a Lexus RX350 SUV that's jam packed with intelligent transportation technology to allow it to drive autonomously. Interestingly, one of the seminal papers in this broad research area was published by two psychologists, Gibson and Crooks, back in 1938[1]. The paper discusses the notion of a field of safe travel and a minimum stopping distance, and how driver behavior is influenced by them. Without getting into the details, you can imagine that in order to avoid death, driver behavior inside a dump truck on an icy road is markedly different from that inside a Ferrari on a dry test track. Some people have inferred from this paper that advances in braking capability will do little to reduce vehicle fatalities since drivers will leave less space as they acclimate to the better brakes.

After this reflection back on my grad school days I reached full agreement with Greg: platform spacing isn't the problem, lifter behavior is the problem, especially amongst the beginner crowd. Lifter behavior needs to be altered to accommodate different lifting conditions and abilities. In general, use common sense and don't be stupid. If you're a beginner on tight platforms, it might be best to follow bowling etiquette and not lift when your neighbors are lifting. Be careful when changing weights on tight platforms, and don't do it when your neighbors are lifting. If you lose your balance in any direction (running off the front of the platform is common), get the weight onto the ground safely, as soon as possible, no exceptions. By weightlifting standards there's no question I'm still a beginner, but by following the six rules below, I've mastered "not being stupid".

1. Don't hurt yourself
2. Don't hurt anyone else
3. Don't break anything
4. Put your equipment away
5. Don't get chalk all over the place
6. If someone is lifting heavy, don't walk in front of them

Gibson and Crooks concluded their research paper by suggesting that the path forward to fewer vehicle fatalities is via better driver education. Beginners, you are now educated.

Matt Foreman
You have the same name as a character from The Sopranos!
Kim
The new platforms and weight storage benches are nice. I really like them for private training and I covet the bench for home. Assuming the class doubles or triples up on them as was typical in the old building, though, I'd probably freak out, because there's less room to get out of the way when it's not your turn on the platform. It's pretty intimidating dodging people back there if you're not used to training in a group setting and not a super-confident genius athlete to start with.
PatG
One bad thing about having lots of space is that lifters will often try and heroically save a lift that should be failed. If you are tight on space, when you don't catch a snatch/jerk in the slot, you have to drop it since it's too dangerous to try and save it by stepping forwards or backwards.

This is why when I share a platform with other lifters, I have no problem with them squatting while I am snatching, jerking - if I don't catch the snatch/jerk in the slot, I fail it. I'd rather do this than practice saving shitty lifts!

You make a great point, and it's one I've talked about with some of my lifters. People get stupid when they feel there are no boundaries, and they get lazy when it comes to controlling lifts. The platform I usually trained on in Mike's Gym had a squat rack at the front of it and chains hanging down from a pull-up bar at its back edge - it forces you to actually pay attention to what you're doing and is some good motivation to control yourself.

JP Cleary
Greg, what do you think are the minimum safe dimensions? I've been wrestling with this in my small garage gym deciding if I need to rearrange some things (or get rid of some things) to create more clearance.
Greg Everett
JP -

I think the 8x8' platform is necessary. Less than that, especially if split-jerking, is just too tight.