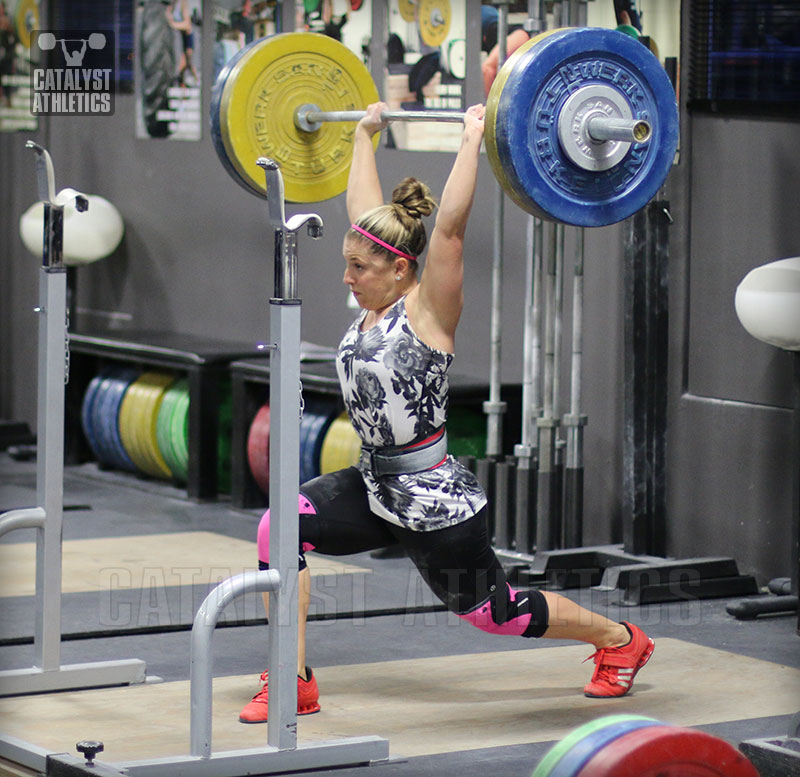 See more articles & videos like this in the The Split for the Jerk collection.
Most coaches will hammer their lifters and reinforce the idea that we want to recover from the split jerk by stepping back with the front foot about a third of the way back first, and then bring the back foot up to meet it. The basic explanation is usually something along the lines that we don't want the athlete taking a big step and creating excessive horizontal movement of the bar overhead, but this could be done by stepping the back foot up partially too.

The goal for the jerk recovery is to keep the horizontal movement of the bar as minimal as possible. In other words, we'd like it to move up as the lifter stands without moving forward or backward significantly. This is a lot of weight in a very high position, and if it gains any momentum, it can be anywhere from difficult to impossible to control.

The reason stepping back with the front foot first is optimal is pretty simple - the back leg serves as a better post to shift the weight onto than the front in this situation. If we move the back foot, we're placing all of the weight onto a bent knee that's basically supporting weight directly above it; it's somewhat like being in a partial one-legged squat. If we shift forward during this motion, which is very likely, the knee moves into an even weaker position, and it becomes difficult to support and stabilize the weight.

Additionally, the abililty to recover with the front foot indicates proper balance in the split (or at least that the lifter is not imbalanced forward), so it can serve as a simple diagnostic tool.

Make sure when you recover that you actually bring the bar and hips back along with the front leg. Too often lifters step back and leave the weight overhead in essentially the same position, meaning they've just pulled their base out from under the weight and then have to hurry to get back under it to stabilize again.

In real life, of course, recover however you need to in order to make the lift; but make sure you're practicing the optimal way and correcting problems that prevent it in training.

Erich Barkhuizen
Agree with the article. Was interesting to see Ilya Ilyan recover both world record attempts with the back foot.
Explained by the last paragraph of the article. But I'm sure someone out there will use that lift to "prove" you shouldn't bother trying to recover front foot first.

Greg Everett
CJ
Interesting...makes sense when explained. Any thoughts on alternating L/R as front foot?
If you're a competitive weightlifter, pick a foot and train it. If you're an non-WL athlete who doesn't use a dominant leg split stance in your sport, you can alternate split legs.