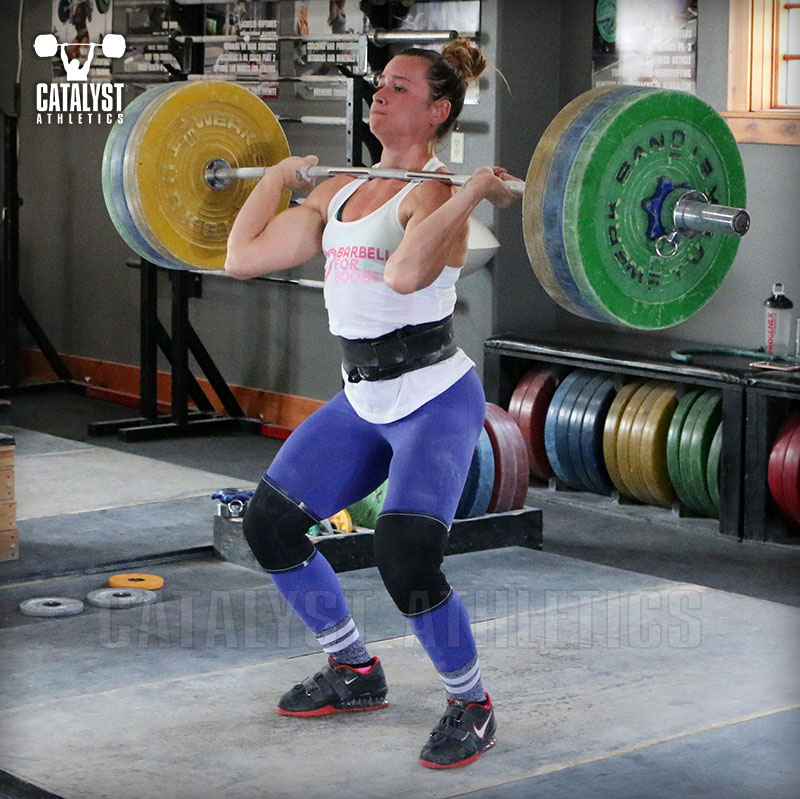 Rob Asks: Recently at our local crossfit box, we were practicing the push press. Our trainer politely corrected our flaws and then we did a 7x3 at a fixed weight. One of his pet peeves was that people’s heels came off of the ground as they generated the hip extension. Looking at your poster (hanging in my garage gym) and then watching your demo video clearly shows the lifters heels lifting as they generate power. Which is correct? Heels down, heels up, or doesn't it matter? My own bias is that in order to generate the power, the heels will naturally raise due to muscles of the lower leg crossing both the ankle joint and knee joint, thus in order to lockout the knee the heel will raise. Looking forward to your insight.

Greg Says: I believe flat heels is what CrossFit is currently teaching in their certifications (or at least was for some time). In my opinion, flat heels throughout the lift is a problem in that it either forces the athlete to discontinue the drive against the ground prematurely in order to prevent the heels from rising, or it’s indicative of the athlete failing to drive forcefully enough or to continue the drive long enough.

The ankles naturally extend (plantar flex) as part of an effort to push forcefully into knee extension against the ground. This is most easily illustrated by a vertical jump: everyone will extend the ankles naturally when trying to elevate themselves maximally. Force an athlete to not extend the ankles, and you can see the limiting effect very clearly (i.e., they will not be able to jump much at all). This is the same thing that occurs with a snatch or clean extension—because part of the explosive effort to lift the bar is a push against the ground with the legs, the ankles will extend naturally unless the athlete is intentionally forcing them to stay flat or has adopted a completely hip-centric lifting style (which has become somewhat fashionable lately on the internet).

Interestingly enough, even if an athlete snatches and cleans with reduced leg drive in the finish and an overwhelming reliance on the hips, this is not equally possible with the push press or jerk, as the upward drive of the bar is accomplished with knee extension, not hip extension. I have seen and heard some CrossFit trainers attempting to turn the dip and drive of the push press and jerk into a hip movement, even going as far as instructing clients to dip by pushing the hips back somewhat. A quick look at some video of any reasonably high-level competitive weightlifter should make it abundantly clear that this is completely contrary to what actually works. One of the most important instructions coaches ever give to new lifters is to dip and drive completely vertically, flexing and extending at the knees only.

That being said, just like in the snatch and clean, how much the heels rise in the push press or jerk will vary among athletes and will be reduced somewhat as weights increase. It will often be less in the push press and jerk than the snatch for a given athlete (at least at similar intensities). The actual degree of extension is not a concern, but again, if the heel remains perfectly flat, it indicates that the athlete has not put as much upward force into the bar with the legs as possible, and consequently, it’s a poorly executed push press. I tell athletes to think of the push press as a leg exercise rather than an upper body exercise. This doesn’t mean it doesn’t involve the upper body—the push press is a great upper body strengthener—but the intention is to ensure the athlete is focused on perfect technical execution of the dip and drive and maximal force generation in the drive. The dip and drive, in position, timing and aggression, should be identical to that of the jerk.

Rene Viera
Hi guys Rene owner head coach and program director at Crossfit Yellow Falcon down here in Miami Fl. I am a 7 year CF coach and athlete. Being that I have always worked at large gyms 400+ member base I can literally say I've coached thousands of people. I realize that doesn't make me an expert and I could just be full of $%€£. I have however had the experience that for the masses it works best to teach heals down on the dip and then on to toes once the athlete begins reaching extension of the knees and hip.

There are several reasons I teach it this way. First I notice that for the most part of the athlete is on the toes or has a shift in weight over the ball of the foot during the dip the athlete tends to drive the knees forward more than desirable. Second this drive in the knees usually pulls the hip forward slightly and makes it look like they're leaning back. Third there's no acceleration from the contraction of the calves and they tend to jump rather than push.

I'm going to put it out again I'm no expert but that has been my experience. I wounded what your thoughts are
Yes, heels DO stay down during the dip and lift only as the drive is being completed. I think you misunderstood.