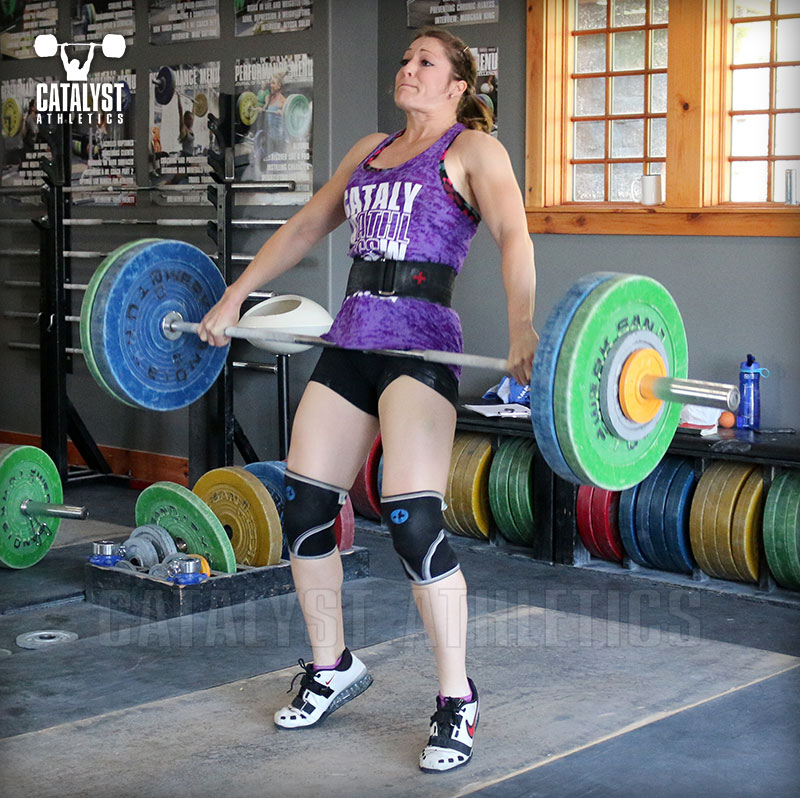 Evan Asks: I'm a male lifter who has been lifting for something like 9-10 months now. I usually lift in my garage; it’s pretty rare that I go to a gym. However, I do on occasion, and the last time I went happened to be a day that I was shooting for a new snatch max. After watching me fail twice at 79.5kg before I finally made the lift, I asked the coach there where I was going wrong. His answer was I almost always land on my toes, which causes me to either chase the bar or lose the weight forward. After I explained to him I shattered my left ankle a couple years back and now have permanent hardware in my leg that only allows for maybe 75-80% flexibility in my ankle, he explained that it’s something I will have to work around because the way the joint was repaired, there is a "wire" that keeps the two bones in my lower leg from separating around my joint because the ligament damage and such was quite severe. So I decided to give the split snatch a try. Now I'm not able to lift as much as I can with the squat style snatch, but I attribute that to not training in the split style before this. Does this sound like a situation that staying with the split style would be a good decision, or should I go back to the squat style and fight through it?

Greg Says: It sounds like the unfortunate reality is that the ankle will never have full range of motion again. Without knowing more about it, I’m assuming this is permanent—that no amount of work on it is going to make a significant change because of the hardware in place. That being the case, I have a few thoughts.

First, the split snatch will always be an option. By nature, it will be harder to lift as much weight as in the squat snatch, although if your squat snatch is significantly limited, it may not be by much. Also, you’re right in thinking that at this point, the difference is probably larger due primarily to your lack of experience with it. The more you train the split, the better at it you’ll get.

Another option is the power snatch. Depending on what your particular strengths are, you may be able to get farther with power snatching than split snatching. Unless you get really good at split snatching into an extremely low position, your power snatch and split snatch heights may not be significantly different (although the lower you are, the easier it will be to hold the position in the split rather than in a squat stance). If you’re explosive and can get good height on the bar, the power snatch option is probably the one for you.

Finally, it may be possible, depending on how limited the ankle ROM is and how good your other flexibility is, to snatch with a different receiving position that’s more reliant on hip flexibility than ankle mobility. This would mean a somewhat wider squat stance, probably toes turned out a bit more, and really expecting a lot of range of motion out of the hips. Obviously this is something you would have to build up to over time to avoid hurting yourself.

I would suggest doing a lot of overhead squats and heaving snatch balances both to improve that squat position mobility and also strengthen the position as much as possible, as you’re going to need a larger margin for error than someone who can easily sit into a good deep squat. Gradually move your stance out to use more and more hip mobility.

Now, I also want to float another idea at you… you may be struggling more because of what’s happening prior to getting into the receiving position than the receiving position itself. You say the coach told you that you tend to land on your toes—maybe this is just a misinterpretation of what he meant, but to me, landing on the toes is different from not being able to squat down without the heels lifting. And if you’re landing on your toes, the way you would need to then settle into the squat would be more demanding of ankle mobility than if you were landing flat-footed with your feet right under you where they should be.

In other words, if you’re out of balance forward during the lift, it’s going to exacerbate the ankle issue. This is why the overhead squats and heaving snatch balances are so important—if you find you can do those with significantly more weight than you can snatch, the ankle isn’t what’s holding back your snatch, at least not entirely. Make sure the rest of the lift is being done properly before you give up on it entirely.

This is definitely a situation that’s going to require a lot of experimentation on your part, and likely plenty of frustrating training days and setbacks.