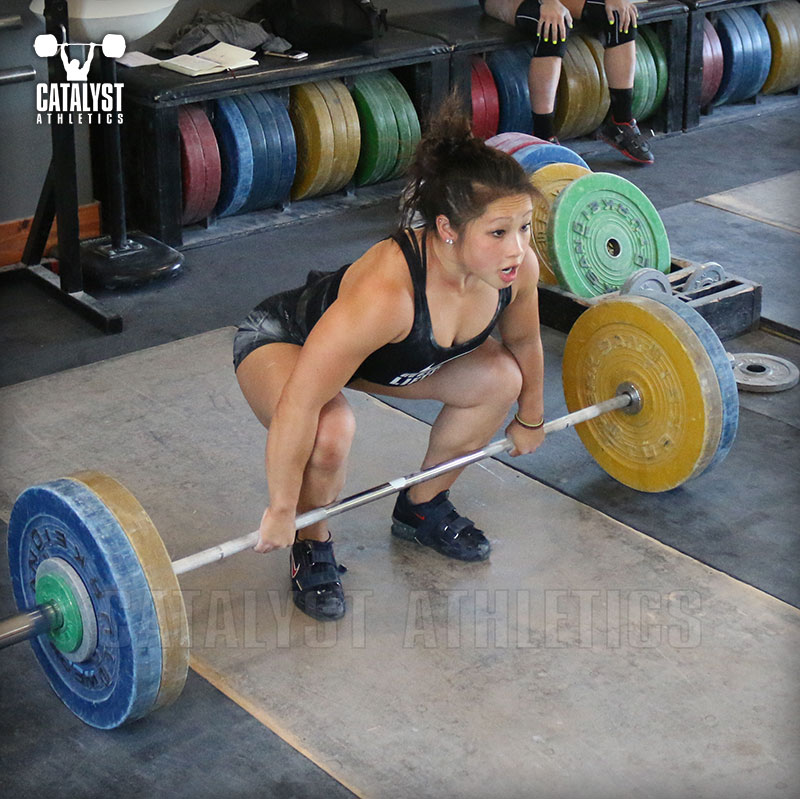 See more articles & videos like this in the Snatch & Clean Starting Position & First Pull collection.
Too many people make the mistake of trying to keep their shins vertical in the starting position of the snatch and clean. Often this is a product of mistakenly attempting to position the bar over the middle of the foot or even farther back. Unless your feet are enormous, placing the bar over the middle of your foot prevents the shin from inclining forward much at all, and unless you have incredibly short legs, that means your body is going to be positioned largely behind the bar rather than above it. A mistake that goes hand in hand with vertical shins is the attempt to keep the weight on the heels in the starting position. Often one is the cause of the other.

Being behind the bar in the start and/or too far back toward the heels can cause a few problems, such as shifting even farther back as you pull and directing the motion backward rather than upward; naturally overcompensating later in the pull by rocking too far forward; the shoulders to moving behind the bar too soon and preventing the hips from contributing as much as possible to the lift.

In the starting position, the weight should be balanced evenly across the whole foot - during the first pull, you'll shift it very slightly farther back, but never dramatically to the heels. The knees should be over the bar to some degree - how much will depend on your proportions and the angle of your thighs in the start. You absolutely should not need to hold onto the bar to prevent falling backward.