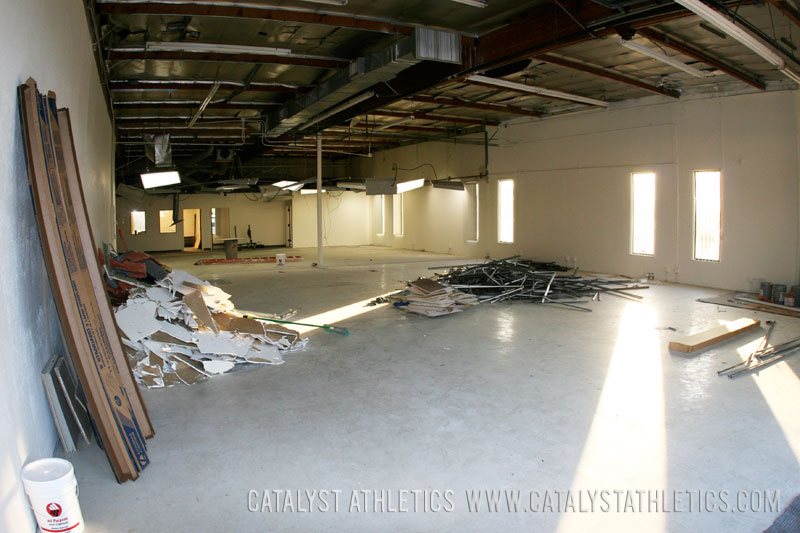 My usual practice of blasting out last-minute articles as I suddenly realize the new issue of the PM is due out shortly has been failing me this month. Despite having a number of articles started and notes for a few more, I’ve been wholly unable to make any progress. So instead I’m going to try something new: a Catalyst Athletics retrospective.

Those of you who have been around for a while are well aware that the latter part of 2009 has contained quite a bit of excitement for us. While this has unfortunately resulted in a bit of distraction and some wasted work hours studying the more interesting regions of the interwebz, it has liberated us in a number of ways and was a long-awaited and much-welcomed upgrade.

2009 began with relocating and opening a new training facility in the San Francisco Bay Area, about 15 minutes from my hometown. After having co-owned NorCal Strength & Conditioning with Robb Wolf and Nicki Violetti, I had taken a break from the attendant responsibilities by moving to the San Diego area to focus for a couple years on my own training, private clientele, and building the Performance Menu, which was in its third year. After a couple years of not having to worry about helping run a facility and confining my training practice to private clients, it was time to open up a new laboratory, build a lifting team and increase the number of athletes and clients I could get my hands on.

Aimee and I made a scouting run up to the Bay Area in November, found a house and a facility in the same day, signed the paperwork, and had relocated by the end of December. The gym was up and running by early January, and in full swing by February.

At this point our biggest problem is developing new trainers and coaches to handle more of our clients and athletes—many of the projects we have in progress are being held back due to our days being dominated by coaching hours. These projects will, however, see the light of day in 2010. I may hint at them a bit later, but you’ll have to wait until they’re actually out to know what exactly is up.
Putting the Facility Together Part 1

Putting the Facility Together Part 2

This is the first issue of Volume 6 of the Performance Menu, which launched its first issue in February 2005. Each month I wonder if we’re going to run out of quality information and have to close up shop, but it hasn’t happened yet. I intend to keep the journal on its present course indefinitely—consistently providing practical and interesting content with no filler for the sake of bigger page counts. With this end in mind, we’ve kept to a small collection of articles each issue—I’d rather have 3 or 4 useful articles that readers find helpful as both coaches and athletes than a large monthly collection of articles that might contain a few useful ideas if one looks hard enough.

Obviously the PM has taken on more of an emphasis on strength and weightlifting than other areas, but we’re always on the lookout for anything we find compelling. Look for continued exploration into other realms.

My book, Olympic Weightlifting: A Complete Guide for Athletes and Coaches, is in its second edition and selling well. It has been extremely gratifying to hear how helpful readers have found it, and I’m in the process of making minor edits to prepare for the next printing, which is again approaching too quickly (the first printing of the second edition was rushed due to our selling out the last printing of the first edition far more quickly than expected, and contains quite a few errors). It’s making the rounds to a number of other retailers such as IronMind, USA Weightlifting, and Muscle Driver USA, which is encouraging.

Our weightlifting team is developing and starting to reach a nationally competitive level. In addition to the local team who trains 5 days each week in our facility, we program for and coach a few other athletes, such as Dutch Lowy and Tamara Holmes. Tamara qualified for the American Open and the 2010 National Championships, as did Dutch. Dutch performed well at the Open a few weeks ago, making 5 of 6 lifts and a 5 kg clean & jerk PR (100kg snatch / 130kg clean & jerk at 69 kg).

The rest of the gang is hard at work in training and we expect good things from them in the future.

Catalyst Athletics will be launching some new projects in 2010 including more and improved website content, books and DVDs, seminar offerings and new relationships. We are continuing to grow in a number of directions at a rate we are having trouble keeping up with. Despite this, we are committed to remaining focused on quality first, and this will likely limit our growth somewhat simply due to time and staff constraints. Fortunately we’re well aware of the fact that consistent quality is the reason for our success, and that abandoning it to support growth would undermine the entire business. So please bear with us as we do our best to respond to demand without altering who we are and what we care about.

Thank you for your continued support.

Bryan Leake
Greg, I'm really excited for you and Aimee, and eagerly anticipate great things from you next year. You've presented me with a problem, though: Do I strategically wait for the second printing, or go with what you have in stock now? I'm sure I'll work that out. I'm glad to hear about a continued focus on quality as you grow. You're a great resource, and it sounds like it'll get even better. Best wishes.
Greg Everett
Bryan -

There won't be any real content changes in the next printing - so no real need to wait.

Joseph Santiago
Greg over the past couple weeks I have used your programing and stared to see results. But I have spent countless hours going through your web site and really started to have a love and understanding for Olympic weight lifting. I have started looking in becoming a lifting coach myself.I just wanted to thank you and your team for the work you do to help us grow in our training. Hope we run into each other one day and looking forward to learning more. Thanks.
Joseph Santiago
Oh one more thing. Watching the video of u building the platform. What size did you cut the top plywood.
Greg Everett
Top sheet is 42" wide
Damien Thompson
Hope to see a 2010 year in review. Great site!