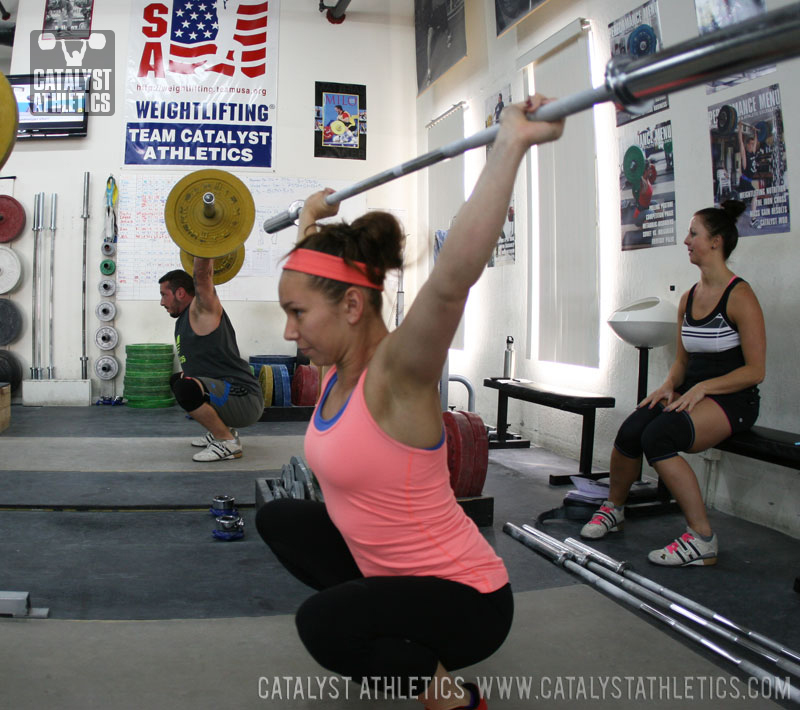 You all know how I feel about warming up. I've spent a lot of time explaining it. If you've missed it somehow, I'll distill my thesis to its essence: If you're not warming-up, you're not tough or elite, you're lazy. Don't confuse this as my saying I think you should spend hours warming up each day; I'm saying you need to prepare adequately.

Aside from warming up in a general way, we can do some things specific to weightlifting to help even more specifically with the lift(s) we're about to do. These are just a few of my favorite pre-lift lifts.


Sots Presses… But Don’t Call One of Them That

The terminology here gets a little confused, so I'll clarify. Really a Sots press is a press from the front in the bottom of a front squat (also sometimes called a press in clean). I and a lot of people call the snatch variation of this exercise—that is, pressing with a snatch grip from behind the neck in the bottom of a squat—a Sots press also. This is really just a bad habit and laziness on my part, and I apologize for continuing to set a bad example. Sots press is just so much easier to say and write on a program than “press in snatch”. Although I do often have to clarify by writing “snatch Sots press” or “clean Sots press”, which I suppose makes the shorthand useless.

In any case, presses from the bottom position of the snatch or clean are two great exercises to perform before the snatch or clean, respectively. They help with mobility in the bottom position, both of the lower and upper body; they help strengthen the mid and upper back to allow the athlete to achieve and better maintain the posture and stability needed to support weight in the snatch and clean; and they really get you warmed up in that bottom position so that when you start actually snatching or cleaning, you’re not whining about your knees and hips and ankles being creaky (or the oft-neglected elbows).

Avoid the temptation to load these up to show off. Stick with weights that allow relatively smooth pressing, a fully locked out overhead position (or as close as you can expect to get based on your present state of flexibility). Make sure your feet are flat on the ground also—you’re not helping yourself by rolling to the inside edges of your feet and dropping your knees in to get more upright. If you're that far off from being able to do the exercise, it's probably not the best choice for you at this time.

Grinding out reps usually means losing the desired posture to hunch into some Quasimodo-esque pose in order to get the bar moving. You’re just abusing your shoulders and wasting your time. Once you can do the movement properly and fluidly, you can start strengthening it.

I’m a big fan of the muscle snatch, and also the lesser-known and -used muscle clean. I use both in my snatch and clean teaching progressions, but also as warm-up and training exercises pretty regularly. These exercise help strengthen and reinforce the proper turnover mechanics for the snatch and clean, which many lifters struggle with, particularly with their heavier lifts.

The key with both of these exercises is aggressively pulling the elbows as high as possible before actually turning them over. To do this, you need to internally rotate your arms properly in your starting position to allow the elbows to move to the sides as they’re elevated. Don’t be the rookie who leaves the elbows turned back and is burdened with the shame of a slow, circuitous turnover.

Don’t use straps for the muscle snatch—this is a good opportunity to train your grip strength as well as the movement and timing of releasing your hook grip if you do so in the snatch. If you want to work grip more, do them with no hook grip and from the hang.

In the muscle clean, keep your grip on the bar as long as possible as you establish the rack position rather than releasing the bar to your fingertips early. Ideally, you can just release the hook grip and keep the hand wrapped completely while still protracting and slightly elevating the shoulder blades and elevating the elbows into a solid rack position. This is a good opportunity to learn to stay connected to the bar, and is also a good stretch—push the shoulders and elbows up against that tight grip and you’ll feel the stretch as well as a better engaging of your upper back. Maintaining a full grip on the bar also forces you to position the bar correctly in order to turn your arms over, rather than achieving much of that turnover with the opening and sliding of the hands around the bar.

The tall split jerk focuses primarily on two things: a proper, long split, and quick and aggressive elbow extension for the jerk. The jump to split or drop to split focuses just on the split movement.

For the tall split jerk, press the bar to about your hairline (or possibly former hairline for some of you) to set the start position. Remember we’re trying to mimic the associated stage of the jerk with this position—this means that the head should be pulled back so the bar can be about vertically above the shoulders and the elbows spread to the sides to be close to underneath the bar. Don’t just stand straight up and hold the bar in front of your forehead like you’re doing a standing skull crusher. Your weight should be balanced over your heels and your trunk locked in tightly.

Quickly move your feet into the split position and punch the elbows to lock the bar out and receive in the split position. Be sure to split with your feet only rather than leaning your chest forward. You should be landing with about a 50-50 balance between the feet. Likely you’re doing this drill at least partly because you have trouble stepping out far enough in the split, so make sure you’re reaching your foot far enough. Hold the split position for 3-5 seconds to further improve your comfort and strength in that position. The more comfortable you are in it, the more likely you’ll get yourself there when it counts.

The jump to split or drop to split (or drop split or split drop as I call them depending on my mood on any given day) focuses directly and only on moving into the split position. In this exercise, the bar is held on the back like it would be for a back squat. Hold on tightly so it doesn’t bounce around back there during the course of splitting.

In the drop split, from the standing start position, you simply split the feet and land in the split position. Because there is no upward movement before the split, you’ll be limited in how much weight you can use, but it will force you to be fast.

The jump to split is the same thing, but with a small dip and drive preceding the split. This allows a bit more time and space and consequently weight. Just like the tall split jerk, hold the split position for 3-5 seconds each time to really get comfortable. Recover from the split position as you would from a split jerk—front foot about a third of the way back first, then back foot up to meet it.


When, Where and How

Choose the exercises you need the most work on and stick them into your workouts. Ideally you place them immediately before their associated lift, but you can certainly do them at other times as well. If you’re going heavy in the snatch, clean or jerk, be smart and don’t kill yourself with these exercises first. Keep the weights lighter and the reps lower so you can still get the benefits without cramping your classic lift style. You’ll probably find those classic lifts go better than usual after you do these as long as you don’t blow yourself out with them.

Bill
Greg, your book is awesome and I use it regularly with our clients and if I do an oly lifting clinic. Quick question, what's your go-to mobility exercises/tips to work on thoracic and shoulder mobility? A lot of our clients (especially males) have awful overhead position in the bottom of a snatch. We recommend the taped lax balls along T-spine, but wondering if you had any others.
Greg Everett
Lying on a foam roller or half roll perpendicular to the spine, arms overhead, light weights in hands as tolerated, abs tight. Or balls/narrow half roll on T-spine, upper arms straight out to sides and elbows bent to 90 degrees with weights in hands. Pressing/push pressing behind the neck. Hanging from pull-up bar with toes on ground about 12" behind the bar so you can lean forward into your arms as you hang.