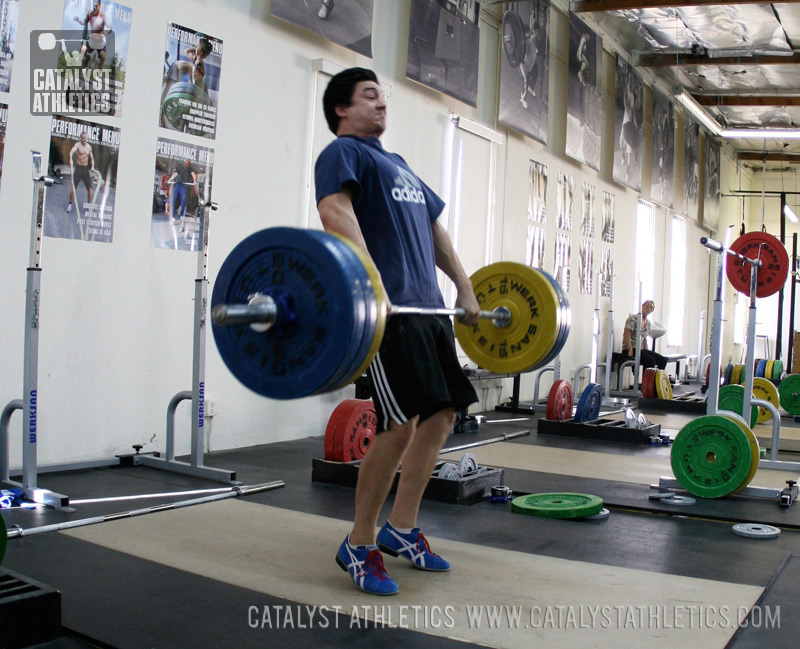 I was inspired by Greg’s recent blog post about the heaving snatch balance. What an idea…doing a quick write-up on a specific exercise instead of training philosophy, etc. Also, I always thought the name “heaving snatch balance” was interesting. I wonder who named it that. Having the word “heaving” attached to a barbell exercise is pretty unique, and it makes me wonder about how many other creative words we can add to the names of lifts. So what I’ll do here is give you a quick list of a few of my favorite assistance exercises, along with some gnarly new titles to make them sound more intense.
Pounding Dumbbell Incline Press- I like this exercise more than bench press for general upper body strengthening. There is less stress on the wrists than in benching, and you still get the same benefits. Anterior deltoid strength is increased and the muscles of the shoulder girdle are widened, which helps a lot with jerking. Nothing makes jerks easier than having a big solid “shelf” of upper body mass for the bar to sit on during the dip/drive phase.
Befuddling Curls- That’s right, curls. Contrary to what you’ve been told by most Olympic lifters and coaches, they aren’t a tool of Satan. There’s some elbow stability to be gained with curls, as long as they’re done sparingly and with full range of motion. Two or three sets of curls once or twice a week will be just enough to work the tissue around the elbow joint without compromising flexibility. Plus, having big biceps makes people want to touch you. Just make sure you’re letting that elbow extend all the way on each rep. Don’t do partial bodybuilding-style curls.
Startling Straight-Leg Deadlifts- These are a little different from RDLs. Here, the knee is kept a little straighter (still not completely locked out, just some very slight flexion of the joint). You’ll use lighter weights than with RDLs too. These are basically a prehab exercise, something to keep the hamstrings and lower back flexible and strong so you don’t start having injury issues in those areas. Anytime I do a workout where I do the OLifts or any squatting, I always finish with three sets of five of these (along with lots of post-workout stretching). I’ve been doing it like this for four years now and haven’t had any lower back pain since.
Bloodcurdling Hanging Leg Raises- I like these as a core exercise for a few reasons. First, they’re a great developer of the lower abdominal area. Second, they also provide a little grip work. I’m always surprised when I have new lifters start doing these because many of them have a hard time hanging on to the bar for 15-20 reps. Third, I think the movement of the hanging leg raise mimics the movement of the body during the turnover phase of the snatch and clean. The flexion of the hip joint when pulling the knees up to the chest has some similarity to how the body moves when jumping down into the bottom position of the competition lifts. I’ve always thought these helped a little with getting faster under the bar.
Ten years ago, we wouldn’t have thought any of these exercises had much value to an Olympic lifter. Because of the influence of the Bulgarian approach in the Olympic weightlifting world throughout the last thirty years, it has often been considered a waste of time to do anything besides the competition lifts, pulls, and squats. However, the Chinese program has done a lot to remind the weightlifting world that various other exercises can provide benefits to the lifter. As someone recently wrote, the Chinese “never met an exercise they didn’t like.” They do lots of things in training that you rarely saw international lifters doing twenty years ago, and their program dominates the world.
Now, let’s never forget that you have to have fanatical focus on the snatch and clean and jerk if you want to improve in them. To get better at these lifts, you have to practice them above anything else. But let’s just finish with the idea that there are many other weapons in the arsenal, in addition to the big cannons, that will help you win the war.

Iain
My favourite exercise name of all-time has to be the 'Allo Darlin'.
A wee core grinder I used to use in abs classes - the athletes lies on the ground face up and raises their straightened legs about a foot from the ground. They then open them by about a foot and a half apart, hold the position for a few seconds, then close them again. This is one rep. Apparently first used by the US Navy in the 50's as an on-ship calisthenic exercise: the sailors named them thus because they associated this particular movement with the, erm, "ladies" they would meet on shore leave.
Greg Everett
We have a hip warm-up drill called Good-Girl / Bad Girl.... And there is of course the Oh-Susie.
Joshua Davis
I lifted with someone that referred to any snatch balance / drop snatch movement as squishies.

Like "Ok, you are done with snatches, now do some squishies".

Lance McEwan
What exactly is an “oh-Susie”?
I can’t seem to find an example or description.