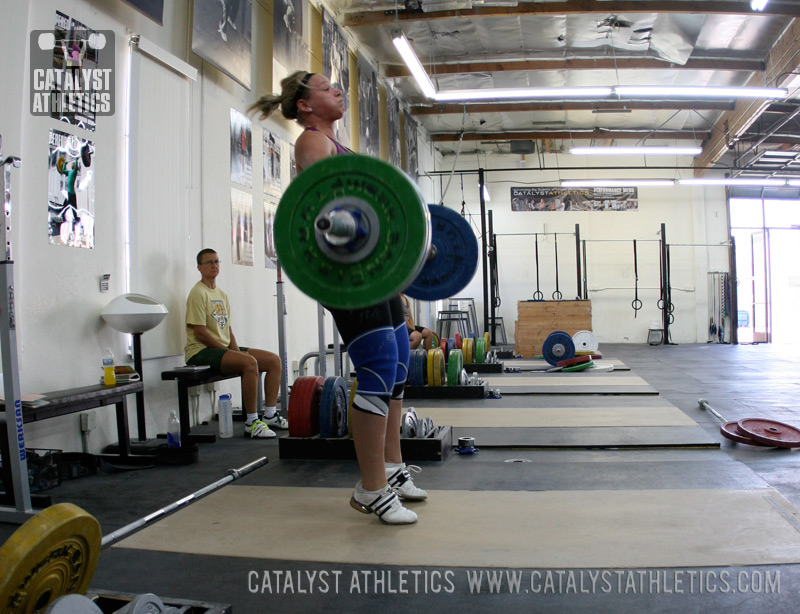 Let’s talk about “hot streaks.”
Plainly stated, a hot streak is a time period where you’re making major progress. Training is basically perfect, competitions are huge successes, and personal records are falling like Irishmen on payday. It’s a phase you hit where you’re just kicking serious ass, plain and simple. You’re en fuego!
Both athletes and coaches have hot streaks from time to time. As an athlete, it’s pretty common to get into a hot streak when you’re in the beginner stage. You’re going to break your own records almost every time you come in the gym. Everything seems to be pretty easy. I guess “easy” is an odd word because you’re still working your butt off. The workouts are tough and you’re committing a ton of time and effort to what you’re doing. But it’s easy to break PRs, because it just seems like you’re doing it all the time. It’s not just the beginners who have these hot streaks either. Experienced veterans who have fought through the tough times also have these phases where it seems like the body is cooperating perfectly and the planets are all lined up exactly the way they should be.
In coaching, a hot streak happens the same way. It’s a time when you’ve got athletes who make you look pretty damn good. You teach them the basics and then get them on a program, and they just take off like rockets. The technique gets sharper and sharper and they experience huge steps forward, over and over and over. This is when you’ve got a woman who goes from a 50 to 75 in the snatch in a couple of months, or a guy who goes from 90 to 125 in the clean and jerk in the same time period. All you’re really doing is just keeping the athlete organized and consistent, and they keeping ripping it up.
The funny thing about a hot streak is that it’s a time when you can continually make progress even though you’re neglecting a lot of little things. You can eat a diet that’s 70% healthy and 30% Wendy’s, and you’ll get away with it. You can blow off pre-hab stuff like icing, foam rolling, etc., and you’ll get away with it. You can party and drink like a sailor on the weekends, and you’ll get away with it. You’re flipping bullet proof, baby. You can do whatever you want and the big weights are just gonna keep going up.
It works the same way in coaching. During a hot streak, you don’t have to be too innovative. Nothing is broken, so there’s nothing to fix. You don’t have to have any of those times when you go back to the drawing board and wrack your brains, asking yourself, “What can I do differently to get everybody moving forward?” For Pete’s sake, they’re all moving forward like gangbusters! All you have to do is show up at the gym, make sure everybody’s following their programs, keep them from getting each other pregnant, and get them to send in their meet entries on time. Get all those bases covered, and they’ll break records.
When you’re in a hot streak, as an athlete or a coach, you think it’s always going to be like this. As an athlete, you’re walking around with a 75-foot totem pole of self-confidence. You stand on the platform, getting ready for a record attempt, and you feel like yelling out, “EVERYBODY GOT THEIR CAMERAS READY?!” As a coach, you aren’t too worried about anything during a hot streak. You feel like you’ve got the Coaching Magic Wand. All you have to do is touch athletes with your magnificence and their totals will go up. You look at everybody else’s lifters and say to yourself, “That guy would be lifting twenty kilos more if I coached him.” As Chazz Michael Michaels said in Blades of Glory, you’re a freight train from hell.
Aaahhh, this feels good, doesn’t it? Makes you feel like going into your backyard and blowing something up. In fact, I’m going to let this blog post end here, because I want everybody to feel like a lifter or a coach feels during a hot streak. Everything finishes on a high note during these times. You drive home from the gym honking your horn and singing/shrieking your music with the stereo blasted up. All is right with the world, so that’s where we’re gonna leave it.
I’m going to write another post in about a week. It’ll be a continuation of this one. I think most of you can probably figure out what’s coming, but I won’t really delve into it now. Everything is peachy, so we’ll just let it stay that way. Right?

Katie
Can't wait for my hot streak! Great read, Matt!
John Dehmer
And then, just like that, the flu bug hits. Followed directly by a wisdom tooth extraction only to suffer a high ankle sprain from collapsing on the bathroom floor in exhaustion after throwing your entrails up from the prescribed vicodin you didn't know you were allergic to ... I kid you not.