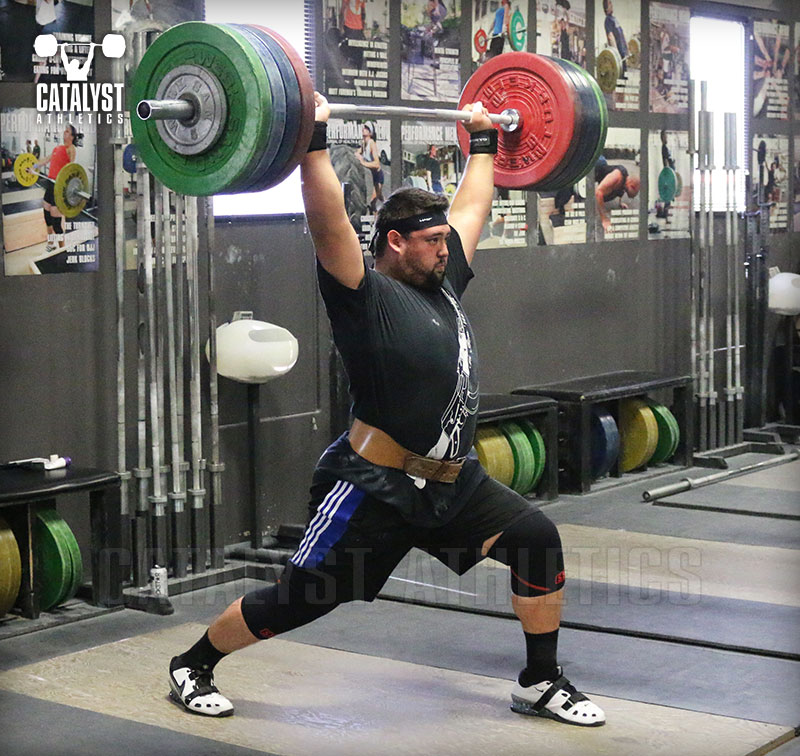 Generally snatches, cleans and jerks are dropped to the floor after the completion of successful reps. But when an athlete is doing multiple reps of the snatch or clean from the hang, or multiple consecutive reps in the jerk, push press or other overhead lifts, the athlete will need to lower the bar under control to the appropriate position. This can be intimidating and made unnecessarily difficult and unsafe if the athlete doesn’t know how to lower the bar properly.

When lowering the bar from overhead after a snatch, the athlete will begin by slowly bending the arms under control to bring the bar down as low as can be managed in this position. At this point, he or she will quickly flip the elbows from under to over the bar, keeping it as close to the body as possible. The clean will begin with this flipping of the elbows from under to over the bar. As the elbows flip over, he or she will pop up onto the toes or jump slightly to meet the bar with the thighs, absorbing the force by dropping back to the heels and bending the knees. The thighs will also create somewhat of a shelf to catch the weight and reduce the strain on the grip. From here, the weight can be lowered in the same manner as a deadlift. To further reduce the height from which the bar must drop, the athlete may choose to dip slightly at the knees while bending the elbows prior to jumping up to meet the bar.

In some cases of multiple-rep snatches from the floor when using straps, the lifter may choose to lower the bar before standing until the final rep. This can be done by, from the bottom of the squat, guiding the bar forward and down as the athlete begins standing in order to bring the hips and bar together. From this point, the rest of the movement is like lowering the bar from overhead; that is, the athlete will absorb the bar with a bend of the knees, and then drop the bar to the floor under control.

With the jerk, the bar will be brought back to the rack position on the shoulders by the athlete first lowering it by bending the arms, then popping up onto the toes to bring the shoulders up to meet the falling bar, and absorbing the load by dropping to the heels and bending the knees as he or she would when lowering a snatch or clean, keeping the torso upright.

Overhead lifts can also be lowered to the shoulders behind the neck. This will be most common with snatch push presses or snatch balances, but may also be the preferred location for athletes after finishing a set of jerks, push presses or presses. The process is the same as for bringing the bar down in the front—the athlete simply needs to keep the head out of the way, keep the shoulders shrugged up to ensure a muscular landing pad rather than a bony one, and to prevent dropping the chest as the weight of the bar is absorbed.

I've been traveling the last few weeks and unable to visit on Saturdays (super bummed). During my time off I've been watching a lot of the videos online and purchased the Oly Lifts DVD and have found them to be invaluable. I know you built the site and update on your own. I am a web developer and use GIF brewery a lot for internal documentation at work. I thought you may want to check this out. Might be something cool to add to an already amazing resource. Can't wait to return to C.A. on March 1!

Andrew
Always love these posts. Almost always wish there was a few second clip demonstrating motions, though.
Chuck McDonald
I saw this video several months ago and have been practicing the technique demonstrated here. It takes a little time to perfect but it's worth learning. I've been trying to show our Crossfit athletes this move but I'm not sure they see the benefit, yet!
Leslie
This is something I take for granted. I can't lower the bar any other way without pain (old CF injury).
Brendan Blake
Coach Greg / Catalyst Team:

Thank you for your amazing instructional content, and also enjoying your book, OW for Sports.

When I get the barbell into clean rack position, I am on 3, sometimes 2 fingers.
If I want to do reps without lowering (e.g. 5 hang power cleans) how do you suggest I re-establish a whole-hand grip before rotating elbows down to lower bar? (until more shoulder/wrist/hand flexibility is established)

I've been doing a little dip, then drive up with legs and re-grip while bar is airborn, but not sure this is ideal, or sustainable at heavier weights.

Note: no bumper plates at home yet, so can't generally drop bar