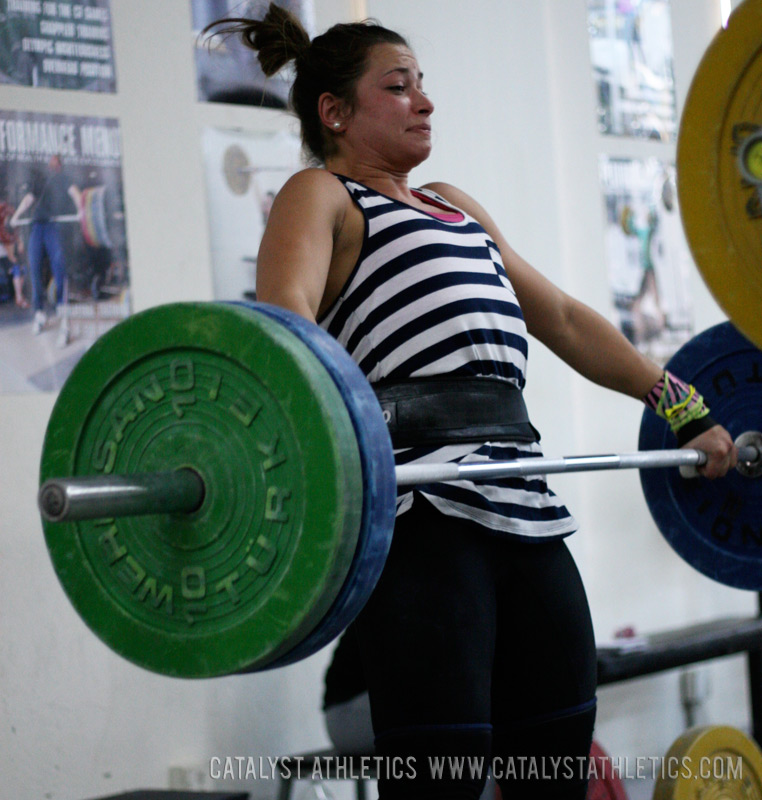 One of our readers contacted Greg recently and asked if we would put up a blog post about the use of equipment for Olympic lifters. Specifically, the question was about belts, straps, wrist/knee wraps, etc. This is a pretty good example of why you guys should feel free to contact us when you have topics you want to read about. I actually wrote something about this exact topic several months ago, but I never posted it because I thought, “Nobody will be interested in this because it’s too basic.” But since somebody requested it, I’ll go ahead and put it out there.

BELTS: My personal preference is to use a belt only for clean and jerks, squats, and deadlifts (rack jerks and clean pulls are included in that too). And I only put the belt on when I go above 80ish% in these exercises. For example, my best back squat when I was doing my top lifting was usually around 240-250 kilos. My rule back in those days was that I only used a belt when I went over 200. When I was clean and jerking 180, I only put the belt on when I went 150 or above, etc. I think many lifters use these same general guidelines, because lifting without a belt is one of the most effective ways to strengthen the core muscles in your torso. Most lifters don’t like to use a belt in the snatch (including me), but there are some that do. There’s certainly nothing wrong with it as long as the bar doesn’t hit the buckle on the way up. Some lifters don’t use one at all, for anything. The heaviest clean and jerk of all time was done without a belt and the vast majority of lifters don’t use it for the snatch. It’s just a matter of personal preference. I also think Olympic lifters should use Olympic lifting belts. Thick powerlifting belts can screw up your bottom position because they’re bulky. They also make you look like you don’t know which sport you’re in when you go to meets. Also, I only use belts with a buckle. Maybe I’m too old-school, but I just can’t find a way to trust velcro belts.

WRIST WRAPS: I’ve used wrist wraps on and off throughout my career. When I was doing my biggest lifting, I didn’t use them. I’m using them now because I’m getting old and things hurt more than they used to. Basically, I think you should use them as a last resort if your wrists get sore to the point where you can’t stand the pain. If you don’t need them, don’t use them, and don’t be afraid to get rid of them if you find you can. Many of the top lifters in the world use some kind of wrist wrap, but not all of them. I don’t like wrist wraps that are too bulky. I like them to be supportive but flexible. If you’re somebody who has a problem keeping your hand closed on the bar when you catch your cleans on your shoulders, bulky wrist wraps might make the problem worse. Don’t be afraid to experiment with different types of wraps and don’t think you have to buy them only from some kind of weightlifting specialized company. Most of the wraps I’ve used in my career have been things I found at Sports Authority or Wal-Mart. And I personally hate using tape on my wrists. It’s too restrictive and expensive for me, but some lifters like it.

KNEE SLEEVES/WRAPS: My opinion on these is exactly the same as what I just stated about wrist wraps. Also, it’s important to know that there’s a difference between sleeves and wraps. Sleeves are solid tubes made of neoprene, nylon, or some other kind of material. Rehband knee sleeves have been really popular with weightlifters for several years. I’ve used them and I liked them, but I do think there’s the potential for the sleeve to push your patella slightly out of position because of its tightness and bulk. Like I said though, I had good experience with them. However, my favorite type of sleeve is something very thin. Basically, I’m talking about the type of sleeve that just provides a little warmth in the joint without really giving any major support. Obviously, these types of sleeves are very close to wearing nothing at all, but that’s what I think you should be doing anyway. If you’re relying on sleeves or wraps to help you stand up with your cleans, then your legs aren’t strong enough. I hate it when weightlifters use knee wraps, but there are a few who do it. Hossein Rezazedeh used knee wraps, so it’s not like they’re all bad. They’re rare though, because I think most lifters don’t like the hassle of using them.

STRAPS: I think weightlifters should always use straps on assistance pulling movements (snatch pulls, clean pulls, snatch or clean deadlift), but that’s it. The only reason you should wear straps on your actual snatches or cleans is if your hands are chewed up to the point where you almost can’t grip the bar. When you see training hall videos of top international lifters, that’s why they’re using straps. They train fifteen times a week and their hands are shredded. But if there’s nothing seriously wrong with your hands, you shouldn’t use straps on the snatch or the clean. They’re a crutch, and they can cause some problems if you’re a competitive lifter. Also, wearing straps in the clean can lead to some serious wrist injuries if they compromise turnover speed. I got hurt pretty bad doing this once, and I’ve known a couple of other lifters who did too.

I think these opinions are probably close to most of the other lifters and coaches I’ve trained with over the years. There’s a pretty common way we use this stuff, and this is it. However, the biggest thing to remember is that you should only use equipment if pain forces you to. If you don’t need it, don’t use it. And this goes especially for newcomers. Everybody should start with just using shoes, shorts, and a shirt, and they should stay that way for as long as possible. There’s nothing more pitiful than seeing a newbie doing 50 kg back squats with a belt or knee wraps. If you can abstain from all of this stuff forever, then do it. Just use your best judgment.

Equipment & Supplements: What I Use
Greg Everett | Equipment

I used rehabands for years (old 7mm models) and they did more damage than good. I do wrap below my patella with a ace bandage but thats it. I tape my wrists buts its very light.

Casey
Any recommendation for brand of belts belts?

I like the Valeo belts with the cam things instead of a traditional leather belt with buckle.

Matt Foreman
I've been wearing Valeo 4-inch buckle belts for several years. I like the kind with the padding inside because it hugs into my lower back, which feels more supportive. I've always bought these at Sports Authority, don't think I've ever had to order one online. I've also worn just plain old leather 4-inch weightlifting belts, nothing fancy. I definitely like the Valeo belts most.
Garrett blakemore
How u been man long time no talk. Glad to see u are doing good. I hope all is well. Take er easy.
Matt Foreman
You too Garrett. Thanks for checking in.
Eddie Paz
Hey what about socks? I notice that no one at CA wears them?
Steve Pan
Eddie -

We wear socks, you just can't see them.
Eddie Paz
I meant weightlifting socks, big thick ones that come just up below your knee.

Everyone in my club wears them. All the 'old school videos' have them, but no one wears them in the modern competitions.
DavidH
i always prefer an neoprene fitness belt as they are Minimise injuries and maximise performance.It is Supportive and light weight.As a powerlifting belt doesn’t just offer protection when completing a heavy workout in the gym. It can also help improve your performance by enhancing intra-abdominal pressure, which in turn stabilises your core and midsection.

Well my thoughts on knee wraps is Grip knee wraps allow you to confidently squat deeper, leg press heavier, and extend to a full range. For serious weight trainers who wish to succeed in powerlifting or bodybuilding, building leg strength is an extremely important factor. This kind of training can put significant strain on joints, so knee wraps can provide that much needed support.
Mack
Are articles like this in the Weightlifting book?
There is information on gear in the book.

Greg Everett
Laura Boschma
Thanks, Matt! That was a very helpful summary, and reinforced what I "thought" I knew. I really appreciate hearing your opinion. I guess this is just one more circumstance where less is more...
fitalliancegear.com
A fitness program should always include strength training. Making your body stronger provides a number of benefits including resistance to injury and faster rehabilitation or healing of existing health problems.
strength training equipment
lu
Is it ok to wear powerlifting wrist straps (those that don't go around the barbell) if my wrists ache in the overhead position? Not all of the time of course. Only until they recover
Personally, I am a fan of wrist wraps. I feel that they help me out overhead.

Alyssa Sulay
Roberto
So at the end in the "KNEE SLEEVES/WRAPS" section. Does he agree on using Knee Sleeves or agrees on using Wraps or nothing at all? Since he says "hate it when weightlifters use knee wraps" but doesn't about sleeves. Clarification please.
"My opinion on these is exactly the same as what I just stated about wrist wraps"
"these types of sleeves are very close to wearing nothing at all, but that’s what I think you should be doing anyway."

Use only if needed.