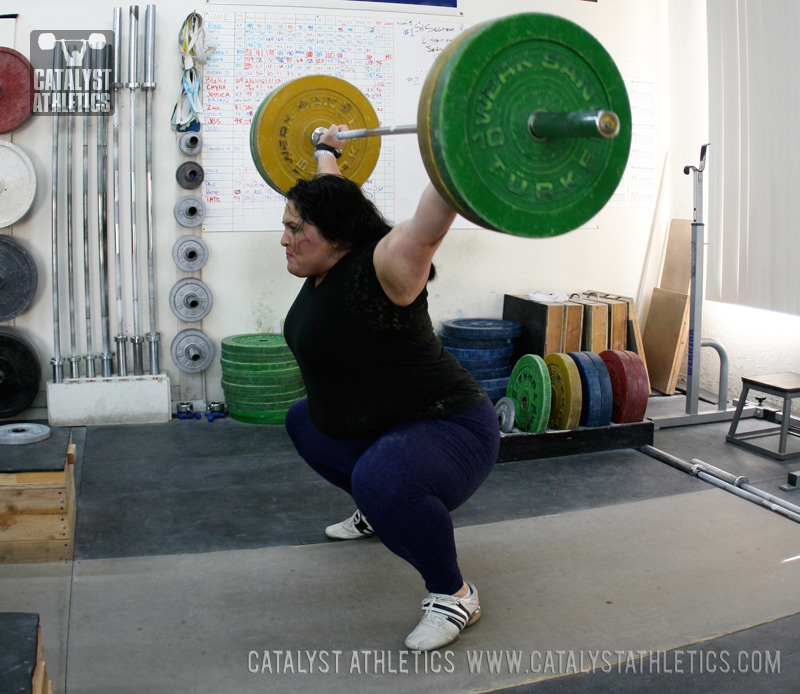 I went to the Catalyst Athletics forum recently and checked it out. Nine of the first eleven topics I saw were directly related to snatching.

So it’s the snatch, huh? That’s what many of you are obsessing about these days? Jeez, how surprising. I just can’t believe this lift is causing you frustration and grief.

Obvious sarcasm there, because it makes total sense. You’re all weightlifters, you want to master the Olympic lifts, and the snatch is one of them. When I started weightlifting over two decades ago, somebody described the snatch as the most complicated physical movement that can be performed with a barbell. I don’t think I’m telling you anything new when I say it’s very tough to learn how to snatch. And I’m just talking about performing the basic movement. Learning how to snatch perfectly? Yeah, it’s freaking hard. It’s not going to happen right away, you’re going to have setbacks, and your physical tools play a major role in how successful you’re ultimately going to be.

Snatching is a lot like a relationship with a lover, in many ways. What’s that? You don’t believe me, or you don’t know what the hell I’m talking about? Okay, just keep reading.

You got interested in snatching because it looks good and you thought it would be fun to give it a try. That’s probably the same reason you went on your first date with your boyfriend or girlfriend. You took a look at it, it got your motor running, and you decided you wanted to do a little more than just look.

As soon as you got introduced to it, you knew right away if it was going to be easy and natural or awkward and challenging. Sometimes, for certain lucky people, both relationships and snatches just happen almost automatically. You don’t even feel like you need to try that hard because it all clicks right from the beginning. But then there are also times when it’s a little funky at the start. The first impression wasn’t exactly perfect, and you kinda know it’s not gonna be easy. You’re still really interested though, so you’re willing to put in some work and patience.

Once you’ve grown familiar and you’ve got some experience together, you start to have a lot of fun. It gets better and better. You feel like things are snapping into place and it gives you confidence. You walk around with a smile on your face all the time, and it starts to occur to you that you might have a future in this.

At some point, you realize that you love it.

Then you have your first obstacles. In snatching, it’s either a technique problem you can’t fix or it’s a plateau where you’re not making progress anymore. I can guarantee one of those two things is the culprit. In the relationship, it’s a first big fight or some other kind of drama. In either case, it feels like somebody pissed on paradise. Everything was so perfect and now it’s all jacked up.

You don’t want to give up. You’ve put in a lot of work and…hell, you still love it. But you want it to be perfect and easy, like it was in the beginning. You start to have doubts, and you wonder if you’ll ever get it back to where it was.

So you try to fix it. If you’re a guy, you probably try to fix it by just pushing harder and dominating the problem. In your mind, you’re thinking, “This isn’t that hard, okay? Just pull your head out of your ass and do it right.” Maybe that works, maybe not. If you’re a girl, you try to fix it by overanalyzing the crap out of it. You obsess about it and burn up so much mental energy that it makes you cry, and you start to think there’s something wrong with you.

The problem might be mild. It might be something small that’s not really destroying anything, but it’s also stopping you from making progress and that’s not cool. Even though you’re having fun, you know the future success of the whole thing is going to be limited if you don’t straighten it out.

Or the problem might be major. You feel like you spend your whole week busting your nuggets to make this thing happy, and it still goes out on the weekend and hooks up with somebody else. In snatching, this is the feeling of knowing you’re working harder than anybody else in your gym, but they’re the ones who are making new PRs…not you.

Trust me, you’re gonna think about quitting. It crosses your mind how much easier everything would be if you just didn’t have to worry about it. But you can’t do it. You still think you’ve got a shot to save this thing. You’re a stubborn little sucker.

Some people walk away. In some cases, that might be the right choice. Some people need to move on and find something else, because they’re beating a dead horse. It doesn’t sound nice to say that, but that’s life.

However, a lot of people make it through the tough times. The love they developed in the early stages is enough to pull them through the muck. It takes a ton of work, probably some small changes, and maybe even some outside help…but they persevere. And as time goes on, they know it’s not the end of the world when little problems continue to surface now and then. They’ve been through the fire before, and it’s nothing to get too worried about. Experience has taught them that problems can be fixed with some patience and willingness to back up, calm down, admit you’re human, and look at things in a different way.

You might be reading this and saying, “This is stupid. Snatching doesn’t mean that much to me. It’s not a big deal.” Great, congratulations. You and I have absolutely nothing in common.

God…why does everything have to be so hard? I don’t know. I guess life would be dull if everything was easy. One of my favorite quotes is, “In life, one must choose between boredom and suffering.” A French woman named Germaine de Staël said it. She obviously must have done some snatching.


1 Comments
D.E.Heeren
I learned the split snatch at age 10 in 1972. It was shown in a Geroge Kirkley weightlifting book I had. Several years later I tried learning the squat snatch without much success. Now at age 50 I am trying again to learn the squat snatch but still split snatch more weight. Considering that I have time against me, I will keep trying to squat snatch, while power snatching and split snatching so I can try to compete. Anyway, I sort of look like Schemansky.