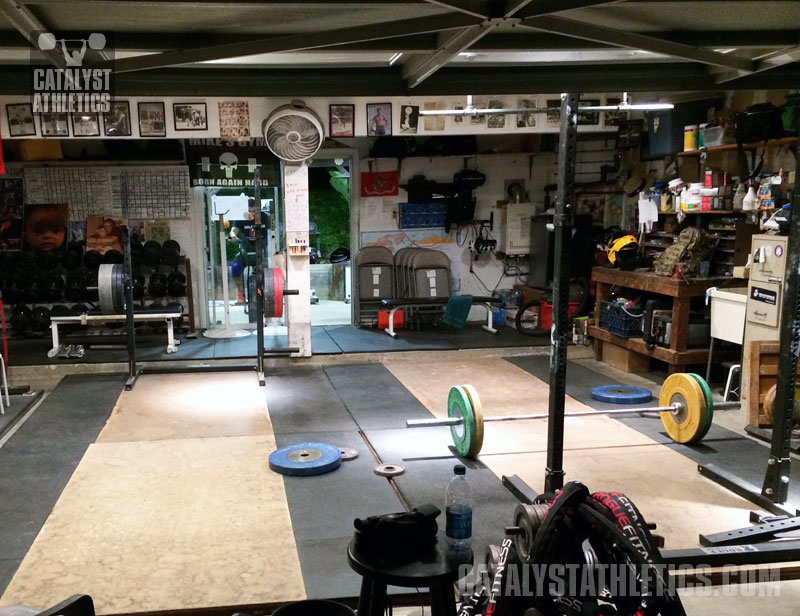 I’ve been training in my garage a lot over the last couple of years. I built a platform in there two summers ago, which is something I used to think I would never do. All throughout my career, I’ve really enjoyed “going to the gym” to train, which means leaving home and driving someplace else to lift with other people. I never used to think I would like working out at home by myself, but I do. I like it a lot.

When I’m in my garage getting my swole on, I like to leave the door open. There’s a specific reason why I do this, and it’s something that behooves all of us to think about.

Obviously, training in the garage with the door open allows all the distractions of my neighborhood to creep in while I’m trying to lift big weights. People stroll by on the sidewalk, walking their dogs. When these dogs see me in the garage, sometimes they trot over to investigate. Sometimes they bark at me. I’ve never had one actually run inside though. When they hear bumpers crashing to the platform, they usually cover their balls and run away.

Apparently, the dogs are smarter than some of the little troglodyte kids that run around the streets in front of my house. When these mongrels (the kids, not the dogs) are wiping out on their skateboards, throwing rocks at each other, screaming, etc., I hear it all. None of them have ever walked up my driveway and tried to ask me what I’m doing, but that’s not because they’re smart. It’s because I stare at them like Travis Bickle when they make eye contact with me. Sometimes I point at the guns lying on my workbench, and I smile at them. That usually keeps them at a distance.

Plus, I’ve got the distractions of my own home to think about. We keep our washer and dryer in the garage, and my wife usually comes in to get the laundry started while I’m training. I could ask her to wait until I’m done lifting to do that stuff, but then I’m gonna have to listen to the whole I-need-to-get-the-laundry-started-so-you-can-have-clean-clothes-and-if-you-don’t-like-when-I-do-it-then-you-can-just-do-your-own-damn-laundry-because-I-work-too-you-know speech. Trust me, it’s a hell of a lot easier to just put up with the distraction.

So the bottom line is this…when I train at home, I’ve got a lot of little disruptions popping up all around me.

I like it this way. Actually, I intentionally train at home so I can have these distractions around me, if you want to know the truth.

If you’re gonna be a competitive weightlifter, one of the biggest things you have to learn is how to block out the commotion that’s going on around you and nail your lifts. Because when you go to weightlifting meets, there’s a lot of hubbub you have to deal with. Lots of people, crowd noise, warm-up room noise, congested atmosphere, different equipment than you’re used to, different platform than you’re used to, and usually a general sense of feeling rushed, claustrophobic, etc. You can get thrown out of your groove pretty easy because it’s a much different environment than the gyms most of you train in. Those of you who have competed know exactly what I’m talking about.

In training, many lifters make the mistake of trying to control their environment too much. You know the kind of people I’m talking about. You might even be one yourself. These are the lifters who HAVE to train on the same platform every day, and they HAVE to use the same bar all the time, and they HAVE to listen to specific music, and they HAVE to get all the gym conditions tailored to their exact specifications…otherwise they get ruffled. When their controlled environment gets disrupted, they throw fits, either internally or externally, and then they go home after their workout and spend the rest of the night blaming the distractions for their crappy training results.

These people are setting themselves up to fail in competition. If you haven’t prepared yourself to adapt to inconvenient conditions in training, how in the world do you expect to handle it when you go to a meet? Brothers and sisters, I’ve seen a lot of casualties over the years when it comes to this kind of stuff. I’m talking about the lifters who train like gangbusters and then crap the bed when they compete. There are a thousand possible variables and reasons for poor competition results, but I’m telling you right now that this particular issue is a HUGE one.

So, how do you address this in your own daily training? Am I telling you to deliberately create some kind of ridiculous commotion in the gym every day, just so you’ll be ready to handle crazy competition conditions? No, not really. I’m not saying you need to put a screaming baby in front of your platform or let a pack of gerbils run around the floor when you train.

But I am telling you that things like this might help: It took me a long time to learn this. We didn’t have the internet when I started lifting, so everything was done through practice, experience, trial, error, more error, and persistence. You’ll have to go through the same thing, but Catalyst Athletics will give you a leg up.

Star
What's PAB?
Matt
Punk @$$ B!+€#
Mark
PAB= punk ass bitch. I think.
Mike M
I agree, nothing beats the garage experience, but have actually had a dog come in sniffing around.
Most people walk faster when they see/hear me dropping a weight or see whats going on.
Unfortunately up here in Canada, I only get to open the door about 6 months per year :(

Jonathan Sparkes
Another brilliant piece of invaluable information brought to us by Catalyst Athletics.
Tim Hamilton
Matt, that's awesome. We need to hang out. haha
Ben Freeman
That's why I like training in lots of different gyms, which I have to as I travel a bit with work. You get used to just getting on with your lifts. One week I'm lifting in a Crossfit gym in Utah, next week I'm in a box in Poland....