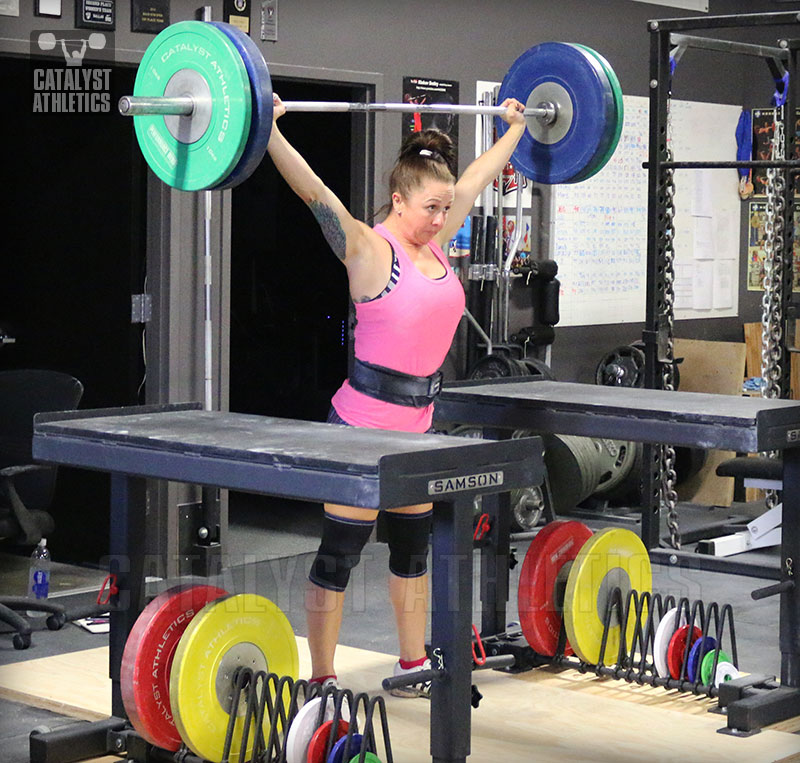 Until 1973, there was no question whether to press or not. The Clean & Press was part of the Olympic competition, and weightlifters trained the press like they now train the snatch and clean & jerk. After the clean & press was excluded from competition for being too dangerous and an injury-prone exercise (though many fairly consider the real reason to be the exposure to unfair judging), weightlifting changed dramatically. Since the power of the shoulder girdle no longer had a direct contribution to the total score, many athletes dropped pressing exercises from their routines, giving more space for exercises that developed pulling abilities and let them increase their numbers in snatch and clean & jerk.
With the results continuing to grow and the standards of international performance becoming higher every year, complete specialization on the competition lifts soon became the only viable option for any lifter with competitive ambitions. In the context of the Soviet weightlifting school, that was a real change, since previously, in the middle of 20th century, Soviet weightlifters were athletes of excellent general preparation and it was often the case for them to show decent performance in wrestling, boxing and other kinds of sports. Even if you watch the training routine of Soviet athletes of the second part of the 20th century, you would see many general preparation exercises – kettlebell exercises, weighted dips, muscle-ups etc. (a good example of such approach is Yuri Vlasov, who was also well-known for his powerful press).
The technique of the snatch and clean & jerk also changed with weightlifters’ shoulders becoming less strong and massive. Before the press was excluded from the program, the elbow lockout in snatch was a little different from its current version and the bar in jerk travelled a little forward in comparison with going behind the neck now.
However, now all of this is nothing more than history. The well-rounded conditioning was traded for performance excellence and you now rarely see a successful weightlifter spending his time on pressing or even thinking of it. But when you happen to see someone launching 400 pounds over his head with only his arms, I hardly doubt that you would not want to have such strength in your arms. The press, despite not going to the scorecard, still continues to be the ultimate demonstration of one’s shoulder girdle strength.
As now I face more and more trainees asking me about the incorporation of the press in their routines, I will try to answer the most important questions about the press: Why would I press? When should I press? And how should I press? Since the press now has nothing to do with competitions and we mainly speak of shoulder girdle strength development, I would expand this article to the whole group of pressing exercises composed (for the purpose of this article) of: press, push press, snatch grip press and bench press.
Why Would I Press?
There are basically two reasons to have stronger arms and shoulders for weightlifters, and these are:
That does not mean that you are expected to hold the bar overhead with your muscles alone – the main support is given by a locked joint; however, extra muscles get the locked joint position more comfortable and safe.

Of course you can achieve a comfortable rack and overhead position by other means, without spending your time and energy on improving your pressing ability, but if you are doing weightlifting for strength conditioning for other sports, or if you are an amateur lifter who is still far from working with extreme weights in the competition lifts, the idea of having strong and massive shoulders, which with the correct approach can make your Olympic lifts more comfortable, sounds like a deal.
When Should I Press?
There are basically three dimensions in which we should find a place for pressing exercises.
First, it is a macrocycle. You would want your pressing work to be done in your base preparation period (for those of you unfamiliar with macrocycle periods – this is the first period in preparation for a meet which ends 6-14 weeks before the meet date). Coming to the next period – transitional (starts after base period and ends 4-8 weeks before the meet), you should drop out bench press completely, leave some push presses and either drop out strict press or switch to working on low reps (1-2) with high intensity.
Then we should find a place for pressing exercise in your training week. As good pressing can make your shoulders and arms sore, which is bad for your speed lifts, the best time of the week to do pressing is the day which is followed by the rest day (for the Russian national team, that would be Wednesdays and Saturdays). However, in the subsequent training session, despite it being separated by the rest day, you still need to make some limitations – avoid heavy snatching (that is evident for those who are familiar with concept of base period; however, for those of you who are not proficient users of periodization schemes, that could be an important note).
And finally, we should allocate the press time in your training sessions. As you may guess from the rationale behind the last paragraph, the best time to do it is the end of the sessions, so that you can make sure that it is not followed by speed lifts. However, there is an exception for the push press. You may do it in the middle of the session instead of the jerk, or do clean & push press instead of clean & jerk. But if you decide to combine the push press with other pressing exercise in the session, that could be only snatch grip press or bench press, and they should always be done after the push press, not before.
To sum it up in a single phrase, We do pressing work in the beginning of our preparation period in the end of training sessions followed by rest days.
How Should I Press?
That is the trickiest question for most of athletes. Poor timing of press exercises and picking the wrong protocols and sequences may easily ruin your preparation, making the useful exercise harmful to your results.
There are a few rules in terms of planning your workload with press exercises correctly, and it comes to one simple word: variation. To save your adaptation reserve, you should not focus on linear progression with a single pressing exercise, but use them in conjunction efficiently.
First, vary the exercises. You could do push press and bench press on Wednesday and then press on Saturday. Next week you could do bench press on Wednesday and then clean & push press and snatch grip press on Saturday. Use your imagination and perception of your own recovery and capabilities to find the scheme which suits you best. And when you will you get adapted to it, change it!
Second, vary the rep range and intensity. There is nothing to invent here, and a standard rotation of 2-3 heavier reps one day with 5-6 reps the other day would be the perfect scheme. Also bear in mind that as part of our aim in getting your shoulders bigger, working until failure (which should come somewhere between 5and 7 reps) suits these exercises well. But do not let it be your everyday protocol, as it could be hard to recover from.
Conclusion
I did not give you definite answer whether you need to incorporate pressing into your routine or not, because no one except yourself can. And the best way to learn it for yourself is to try it. And I hope that this article and my perception of pressing routine will let you have a positive and injury-free experience of pressing so that you can answer this question to yourself!

Trevor
Great article Sergey, looking forward to seeing more of your content
lifting man
this is a great article because people are obsessed with pressing
John
An.other excellent article incorporating concepts of periodisation (long term planning) with medium and short term planning. Most articles only focus on short and medium term.

Thanks Sergey and Artem!


Sergey Bondarenko is a weightlifting and strength & conditioning coach, Master of sports of international class in Russia. Article translations are by Artem Chupakhin, Sergey’s trainee.