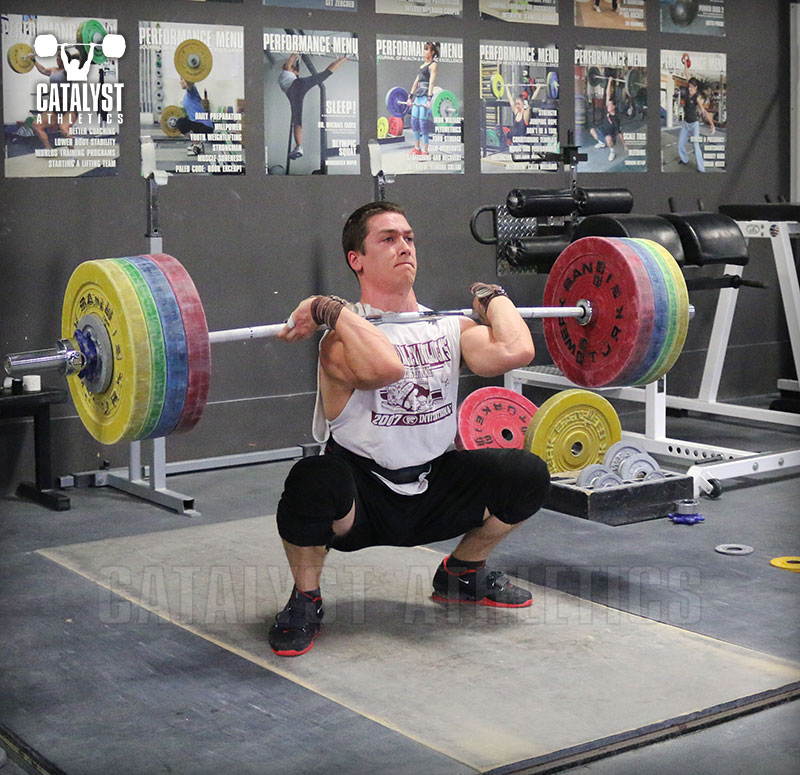 Stubborn technique problems are frustrating to deal with, but more often than not, we can find the causes relatively easily (whether or not we can correct them is another story, of course). But dizziness and (near) unconsciousness during cleans or front squats is, for most lifters, completely baffling and as a consequence, even more frustrating.

There are a number of possible causes, and without seeing or knowing you personally, I can’t tell you which is your particular problem. Instead I’m going to give you a basic list of problems and corrections that you can work with to resolve the problem.

First, let’s get this one off the list: the barbell compressing your trachea. How would three seconds of no air cause you to pass out? You’re already holding your breath (or exhaling) during the lift, and that aside, you mean to tell me that you can’t hold your breath for a few seconds without losing consciousness? Even if your trachea were 100% occluded, allowing zero airflow, during a clean or front squat, this is absolutely not going to cause dizziness or unconsciousness. Stop spreading this nonsense around.

A very simple explanation, but one that often goes ignored despite its obviousness, is exhaustion and/or dehydration. It shouldn’t surprise anyone that if you’re running a major sleep deficit, stress and/or dehydrated that significant physical efforts such as heavy cleans or front squats will make you dizzy and feel like you’re going to pass out. If it’s just an issue of dehydration, it can be resolved relatively quickly (hint: drink some water), although it won’t be instantaneous, and if you’re 80% through a clean workout, it’s probably too late to salvage it with rehydration. The better solution is to prevent dehydration in the first place.

If the underlying issue is exhaustion, you’re not going to fix it in a given training session. You need to first and foremost avoid getting into this state as much as possible, and short of that, you’re going to have to make some changes to your workout.

Unlike a loss of airflow, the loss of blood flow to the brain takes very little time to cause unconsciousness—3-4 seconds or so with full occlusion of the carotid arteries is enough—and even less potentially to create dizziness.

Occlusion of the carotid arteries in a clean or front squat is the result of an improper rack position allowing the barbell to place pressure on the arteries in your neck (note that this is not necessarily direct pressure of the bar on the arteries, but usually pressure on the musculature of the neck, which then compresses the arteries). A proper rack position uses protraction and slight elevation of the shoulder blades to not only create a secure space in which the barbell can sit, but to prevent the bar from smashing your carotid arteries.

A lifter with a normally good rack position can still suffer from this problem when tired and consequently unable to maintain proper shoulder and upper back position, or from a poor clean in which the bar crashes into the rack position and is not placed properly, or has sunk too deep against the throat (causing carotid artery compression—not compression of the trachea) due to the excessive downward force of the crash.

Fix: Establish a proper rack position for the clean and front squat, and fix technical errors in the clean that cause the bar to crash on you.

Normally this isn’t a problem, especially for the brief duration of a single lift, but sometimes it can be enough to cause dizziness, especially if this is coupled with another cause, which as described in this article, it always is.

Fix: Since this alone likely isn’t going to make the difference, don’t worry too much about it. However, to reduce intrathoracic pressure without losing trunk rigidity, you can release some of your air during the toughest part of the lift (a small amount controlled by hissing or similar—if there isn’t a weird noise, you’re releasing too much air too quickly).

The vagus nerves have numerous functions, but among the effects of vagal nerve stimulation are reductions in both heart rate and blood pressure. Stimulation can be caused a number of ways, from electrical impulses directly to the nerve to putting your face in cold water to holding your breath to bearing down as if you’re trying to take a growler… I suspect you can figure out based on those last two how vagal nerve stimulation plays into dizziness and unconsciousness during tough clean or front squat efforts. (Incidentally, holding my breath and forcefully tightening my trunk as a vagal maneuver is how I slipped my hypertension past the nurse during my pre-employment physical for working on an ambulance many years ago—maybe it was dishonest, but it also demonstrated my medical knowledge, so I consider it an even break.)

With any lift, we already have breath-holding as part of the stabilization of the trunk, and at least some degree of effort during the recovery of the clean or front squat—in other words, we unavoidably have some degree of vagal nerve stimulation. Normally this isn’t enough to cause a problem—the problem arises when the degree of effort is magnified due to an extremely tough recovery, and/or the duration of that tough effort is extended by virtue of its toughness. If you want a demonstration of this effect, feel your pulse in your wrist, then hold your breath and bear down—you’ll feel an almost instantaneous reduction in your pulse rate—and then relax and begin breathing again to feel your heart rate return to normal.

(Note here that vasovagal syncope—passing out due to vagal nerve stimulation—is not the result of compression of the vagus nerves by the barbell in the rack position as has been erroneously claimed on the interwebz. The actual mechanism is described above.)

Fix: Correct any technical errors that are making the lift unnecessarily difficult, e.g. the bar crashing in the clean, and release some of your air during the most difficult part of the lift.


A Note on Breath-Holding

I’m not a doctor and I’m not giving you medical advice, but if you have a history of hypertension, stroke, TIA, heart attack, angina, etc… don’t be an idiot. Breath-holding, especially combined with high levels of exertion, probably isn’t a great idea for you. Be smart and live to lift another day.

If you ever do find yourself dizzy during a clean or a front squat, drop the bar and take a knee. Even seemingly minor dizziness can very suddenly and unexpectedly get worse, leaving you falling over with a bar on your shoulders—the best case scenario here is embarrassment; worst case is a very serious injury, such as to your head. Don’t be a hero. Come back and make the lift when you’re ready again.

Steve
Greg-
Sometimes in the front rack position either front squating or cleaning, I get light headed and fuzzy. I dump the bar to to recover and my hearing gets messed up, everything has a metallic reverb to it. It is rare it happens but it does happen. Do you have any experience with or your athletes with this issue. Just curious.
Yeah, those are all just symptoms of that same phenomenon. Pretty typical stuff for losing or nearly losing consciousness. I don't know the exact mechanism, but it's common.

Rolf
Steve, I have the exact same, including the metallic reverb. It's with cleans only, not when I do front squats. Curious as well.
Rolf
Now I think of it, last two times it happened when doing clean pulls and deadlifts, so no rack position involved.
If there's no rack position, then it's strictly the vagal stimulation and reduced cardiac output elements - that's plenty to put you to sleep.

Greg Everett
Akash
Hey Greg, Lately I am losing consciousness while doing front squats. Occurs when I'm getting out of the hole. It rarely used to happen but it's happening each time I front squat since past 2 weeks. I am in a caloric deficit since 5 weeks. None of my other lifts seem to be affected this way. Back Squats feel fine. Should I drop the lift altogether or try something like 50-60% 1rm just to keep the movement pattern in.
Starving yourself isn't helping, but you should still be able to avoid it most of the time. Make sure you're doing everything outlined in this article correctly, be sure you're eating enough before training, and really make sure you're adequately hydrated and are getting enough salt specifically and electrolytes generally.