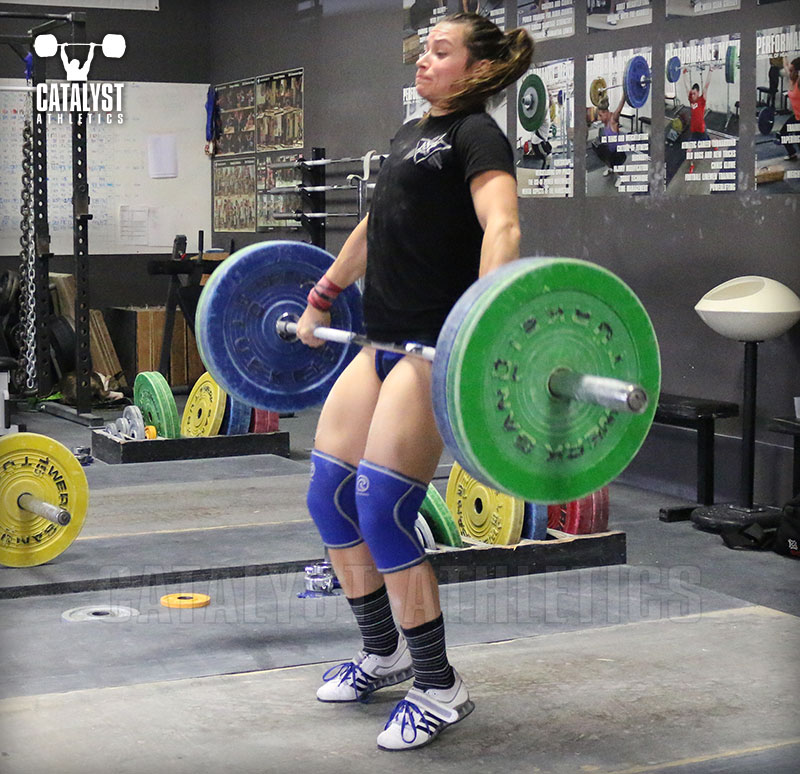 Let’s see if we can improve your snatch technique, shall we?

Most of you are Olympic lifters who are in the beginner/intermediate stages (under 5 years of experience), so you’re struggling to master the snatch movement like a hippo trying to squeeze through a narrow doorway. It frustrates you, you make progress and then go backwards, you get confused, you lose faith in your ability to contribute to the human race in any meaningful way… just normal weightlifting stuff.

So I’m going to talk about a technical element of the snatch that’s very important, and very difficult to do correctly. Specifically, I’m talking about extending your hips forward and up into the bar as you move into the finish of the second pull.

Let me show you a video that demonstrates what I’m talking about. This is Catalyst weightlifter Jessica Lucero snatching an American record 93 kg in the 58 kg weight class at the 2016 Olympic Trials (I took this video, by the way). I want you to LISTEN to the lift. As Jess pulls the bar from the ground, the room is basically silent. Now you have to really listen closely to hear what we’re talking about. As Jess extends her hips into the bar at 13 seconds, you can hear the impact from the force she’s generating. Go back and click on it several times (put your little mouse finger-point thingy on 12 seconds and just keep clicking back and listening to that sound at 13 seconds).


Hear it? Jess pushes her hips into the bar hard enough to rattle the plates and cause a muffled BOOM. That’s what you’re hearing. If she was using metal change plates and no collars, you’d probably hear a little CLINK! as she extended her hips in. This is pretty common with elite weightlifters. The sound might be loud, or it might be slightly muffled, depending on the exact way the lifters move their bodies. But the point we’re trying to establish is that when great lifters do the snatch, they push their hips into the bar really, really hard. And if you listen very closely in silence, you’ll probably be able to hear it.

This is one of the magic secrets in performing this lift, but there’s a pretty obvious warning that comes with it. When inexperienced lifters push their hips into the bar, it usually causes the bar to fly forward away from the body, which is a recipe for disaster. Their pull turns into that dreaded loop you see when you watch from the side, and it results in poor technique and lots of misses. But if the athlete can extend the hips FORWARD and UP at the same time, along with using the arms correctly, the bar stays close to the body and results in a fast, snappy lift. It takes a long time, lots of practice, and specific drills that focus on the right kind of movement to pull this off. When you watch this video of Jess, you have to remember that this is the result of 10+ years of training, hard work, and precise concentration (in addition to the fact that she’s an amazing athlete).

The coach (and the athlete) needs to use good judgment on when it’s right to start emphasizing this kind of movement. If you tell a lifter to start pushing their hips into the bar when they’re just getting started in the OLifts, it’ll almost always send that bar flying out in front. At some point, hopefully they’ll be ready to start focusing on it and using the rest of their body in a way that keeps that bar close to the abdomen after the hip drive.

Some elite lifters might not even think about it consciously. Everybody has their own technical cues and mental reminders they use to make their technique effective. I don’t know if Jess actually thinks about extending her hips into the bar. She might be thinking about doing something else with her legs or whatever, and her hip movement is just the by-product of what she’s thinking. It all depends on the lifter.

But trust me, you’ll have to master this if you ever want to graduate up into the ranks of snatch holiness. When I was doing the best lifting of my career, I thought about three things in the snatch:
1) Back tight off the floor
2) Push the hips as hard as possible
3) Finish with the arms

That was in 1997. I started practicing the OLifts in 1990. Get the point? Everybody has to stand in line and wait their turn in this sport. Weightlifting is just too difficult to be good at right away.

Which assistance exercises work the best? That all depends on the athlete and there’s not a blanket answer for everybody. I personally believe in snatch pulls (with no arm bend, just toes and shrug at the top), 3-position snatch pulls, and snatch high pulls (bar coming to the top of the abdomen). But you need to remember that these exercises have to be done correctly with the athlete focusing on the right things and moving the right way. If you’re doing these exercises wrong, you can practice them until the Cubs win the World Series and it won’t make a damn bit of difference.

The clean is a different lift. That’s why I’m talking about snatching here. Because of the narrower hand grip in the clean, the contact point of the bar on the legs will be different than the snatch, and that’s not what I’m discussing in this article.

Now… some of you are going to immediately scour YouTube for videos of elite lifters snatching with no sound during the hip phase, just so you can disagree with this article. As I always say, I’m sorry you didn’t get enough mashed potatoes at the dinner table when you were a kid.

Not all athletes move exactly the same, and not all lifts SOUND the same. But trust me, generating force into the bar through the hips while still keeping the bar close to your body… it’s a required element if you ever want to be a major ass-kicker. Best of luck in your quest!

Vanerio
Thank you very much! Does this movement cause any pain?
It does if it's not performed properly. Bar shouldn't contact directly on the pubic bone - if it does, adjust your grip slightly, but also be sure your timing of the explosion is correct (i.e. not early) and that you're keeping the bar as close as possible prior to the contact with the hips. More info on all that in this article.

Greg Everett
Misbah Haque
Yes!! Great article Matt. I'm not sure exactly who I heard this from or else I would attribute, but what really helps me is thinking about using the hips to UPPERCUT the bar. Not JAB. It's a quick, clean, but powerful punch. And it's like music to my ears when everything works. Then time to start back over and search for the same song.
Cameron
I've been lifting for only 4-5 months. Been struggling with this issue. I have long arms so with my grip all the way out to the collars I still strike my public bone if I try to push my hips into the bar. The ensuing pain really throws off my subsequent lifts. Brushing the bar on the way up has worked better for me, I've been able to confidantly snatch more weight. My coach wants me to focus on that aggressive hip contact and maybe just get a pad. Is it possible a lifter like me should do it differently? I don't want pain in my pubic bone to prevent me from becoming good at the snatch.
Your coach is giving you terrible advice. If you find you can lift better with more of a brushing contact AND what he's asking you to do is painful, do what works for you. This video has some info that may help you too.

Greg Everett
MAJIK
Not hating, just trying to figure it out - but when I took my level 1 and level 2 Oly weightlifting courses both instructors said this is no longer recommended, and that even most elite oly lifters have cut this out of their progression. Something about it causing hip problems in the long run.

Thoughts?
I don't teach the scoop as an intentional action, so I do disagree with Matt on that. The motion itself happens naturally, and needs to happen naturally to be effective and not disrupt balance and bar trajectory. To be clear, though, the motion of the knees moving forward under the bar and then the hips moving upward DOES happen with ALL lifters, whether or not they know it. Read this for more.