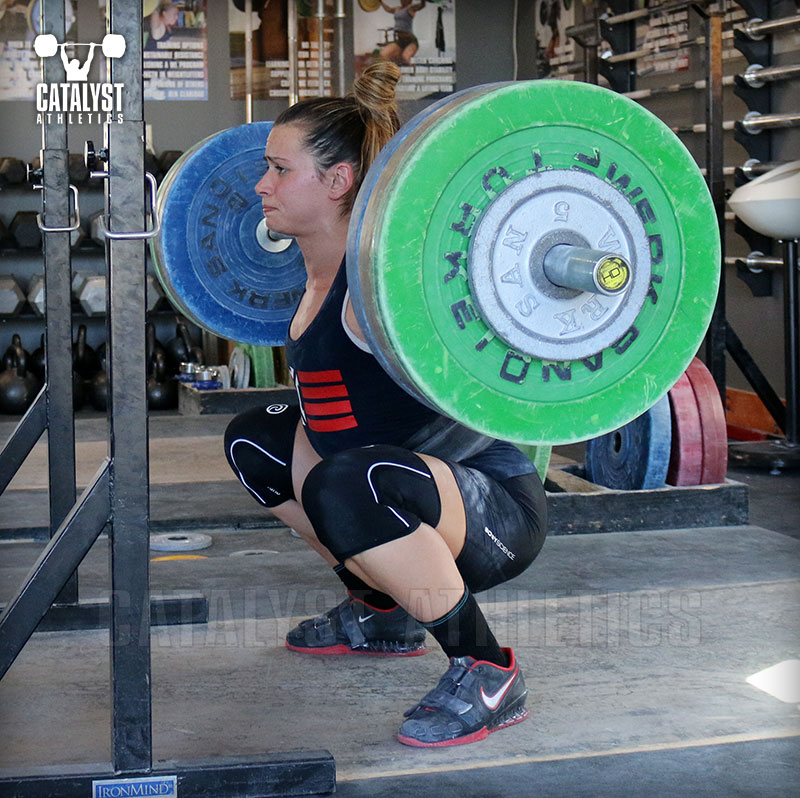 That said, there is still resistance among non-competitive weightlifters to wearing weightlifting shoes, even when training the snatch, clean & jerk and related lifts for the sake of getting better at the snatch and clean & jerk. If we’re being totally honest, I find this odd for a number of reasons—it’s no different to me than playing football and refusing to wear cleats, or playing baseball and refusing to wear a glove. I’ve heard all kinds of fascinating rationales, my favorite of which is that weightlifting shoes aren’t “natural”… neither are barbells, rubberized plates, lifting platforms, or any of the other things you are using to train weightlifting. If you want to be natural, go lift rocks barefoot out in the dirt with your gens in the breeze—at least that makes sense.


Let me make a simple case for shoes even if you’re not a competitive weightlifter: All of these things translate into more weight lifted and less risk of injury. Seems like a good deal to me.


But I Have Incredible Mobility

A pretty typical argument from the resistance is that they already have good mobility and can squat deep without weightlifting shoes. There are usually two problems with this: their depth is nowhere near true full depth (knee joint closed as completely as possible with the back still in its proper arch and weight balanced over the foot) and their posture is suboptimal, i.e. the trunk is inclined forward excessively, or they have to arch the back to an extreme degree to bring the upper back into an upright position.

If you truly have adequate ankle and hip mobility to sit into a full-depth, nearly-vertical-trunked squat in flat shoes, that’s fantastic and I agree you don’t need lifting shoes for the reason of mobility. However, this doesn’t address the elements of stability and force transfer that lifting shoes provide—you can’t replicate that with other shoes.


What to Expect When You Switch

Here’s the tricky thing—if you’ve been snatching, clean & jerking, squatting, etc. in non-weightlifting shoes for a while, you’re more than likely going to feel worse initially when you begin using weightlifting shoes. This shouldn’t be surprising considering you’re changing something quite significant—like any other change, adjustment and adaptation will be required. An initial adjustment period doesn’t mean shoes are making things worse, in the same way that correcting a long-standing technical bad habit will make the lift feel “wrong” at first.

You can expect two things initially: to feel a bit out of balance forward (and/or more pressure on the balls of the foot), and to feel weaker or less comfortable in the squat.

The raised heel of lifting shoes will initially make you feel like you’re too far forward on your feet. However, this is just because you haven’t adjusted yet to position your body properly for balance. Claiming that weightlifting shoes unavoidably create a forward imbalance is like saying no one can stand on a slope without falling. There’s no reason, anatomically or mechanically, that you can’t balance yourself over your foot however you want in a raised heel, especially when the angle of the foot is so minimal.

Your squats may feel weaker or less comfortable during the adjustment period as well for a pretty simple reason: If you’ve trained your whole life in flat shoes, you likely have been sitting the hips back somewhat more when you squat, and consequently developed a balance of leg and hip strength that favors the posterior chain to some degree. When squatting in weightlifting shoes and moving in the optimal weightlifting squat posture, you’ll be relying more on the quads than you have previously, which will be relatively underdeveloped. Don’t lose your mind and get rid of the shoes—retrain your body to do what it needs to do.


Do You Have to Wear Weightlifting Shoes?

Of course not—you can train and even compete in any shoes you want (there is no rule in the IWF or USAW that specifically requires the use of weightlifting shoes, although there are some simple requirements).

If you believe that the positions allowed by weightlifting shoes and promoted by weightlifting coaches are bad for the knees, I encourage you to do some more homework on the topic because this is simply untrue and you’re robbing yourself of a lot of gain for no actual benefit.

If you just plain don’t like the idea and think weightlifting shoes are stupid and funny looking, that’s your natural right as a human and I won’t interfere—just don’t pretend you’re doing it for rational reasons.

Matthew
I need a new pair of shoes. My first and only pair were Rogue(Do Wins) unfortunately I don't think they make them anymore. I have unusually wide feet and I need to typically get wide fit shoes. Any brand of shoe you would recommend for a wide foot?
Rick
Your article on weight lifting shoes is a good one , when I first started lifting in 1968 we were considered odd and lifting weights would not get your in any kind of fitness or shape , they were wrong .. I wish there had been access to lifting shoes back then , I was doing cross fit in 1969 before it was called cross fit ! And I still do it today !! I am approaching my 50th straight year of pumping iron !! You do need more gear articles like this one !!!
Rick
Mathew get some SABO weight lifting shoes from Maxbarbell they are inexpensive and well built !!! Russian shoes who knew ! I really like mine !!
Maximiliano
Los zapatos de pesas mejoran el clean y snacht pero no el jerk esto es correcto
Jason
Matthew: Check out the Nike Romaleos II. They are wider than most other weightlifting shoes (like the Adidas Adipower) and are very, very nice. They should work for you without issue.
Rod
I need more convincing. I am a non-competitive weightlifter. I want to believe the "less risk of injury" benefit, but you need to provide me with data for that. Otherwise, adding this equipment is changing the geometries (...and consequently the forces and loads) around the feet and the ankles. So even though competition-wise it may still count as the same lift, to your body it is a different lift.
You're going to be very disappointed, then, because no one cares enough what shoes you wear to spend time trying to convince you, especially when decades of experience of the hundreds of thousands of athletes and coaches in the sport of weightlifting (which has one of the lowest rates of injury of all Olympic sports) isn't enough "data" for you. You can train in clogs if you want.

Greg Everett
Rod
No doubt that the shoes are safe. I was only asking whether not wearing them is not safe, because I have heard this "less risk of injury" claim often. But that's fine. We are far apart here. Thank you for your time.
Anton, Adidas Power Perfect 2
Awesome and informative article. Prevented me from sending them back after the first squat felt weak.
I even compared them directly with my vans during the training.
The first thought was "maybe it's not for me and I am better off with vans" and then as you described in the article I thought about the underutilized quads but still thought of returning them. Hopefully I can bring my quads up as my medialis is quite overpowering.

Johnny
G’day Greg (also posted on the podcast)I was recommended one size smaller for a tight fit. My toes touch the end but not quite curling, but snug enough to be uncomfortable (definitely quite narrow)Is this the perfect fit? If so, is it safe to say they will get more comfortable with use? If not, tell me to get a bigger size. Cheers legend
Should be pretty snug, especially if new. They'll stretch out with use, and the worst thing ever is lifting shoes in which your feet slide. Narrowness could be a problem, though, because that can remain uncomfortable in the long term. If you have access to a half size larger to try, that might be better.

Greg Everett
harrison
What's your opinion on using lifting shoes for athletes (soccer, football, etc)? We generally don't allow our athletes to use them because we don't want equipment to compensate for immobilities, or to cover up issues that could eventually lead to injury. Thoughts?
If they're stable and squared away with non-lifting shoes, I have no problem with it. That said, I do think this is pretty unusual - the safety the stability of lifting shoes provides outweighs any possible reduction in mobility due to a lifted heel. And let's be honest - how many field sport athletes possess mobile ankles? I have yet to meet one.

Greg Everett
Lauren
How often should you replace weightlifting shoes? I've seen some people say to wear them until they fall apart. I've had a pair of Romaleo 2s for about 3.5 years. Seeing some good deals and wondering if I should go for it or not.
Lauren - You can use shoes as along as they feel good! Personally, I keep a back up pair for when I need shoes in the future.

Alyssa Sulay
Sheryl
I just love ❤️ you
You have such great info 🥰
Kevin McCandless
Hi! I have minimal ankle mobility and have benefited greatly from the raised heels of lifting shoes, but I’m still not reaching an optimal squat position. What are your thoughts on using a heel-raise insert (e.g., VersaLifts) with lifting shoes while I continue working on mobility?
If they're absolutely necessary to avoid injury, I would use them. Otherwise, I'd stick with regular lifting shoes.