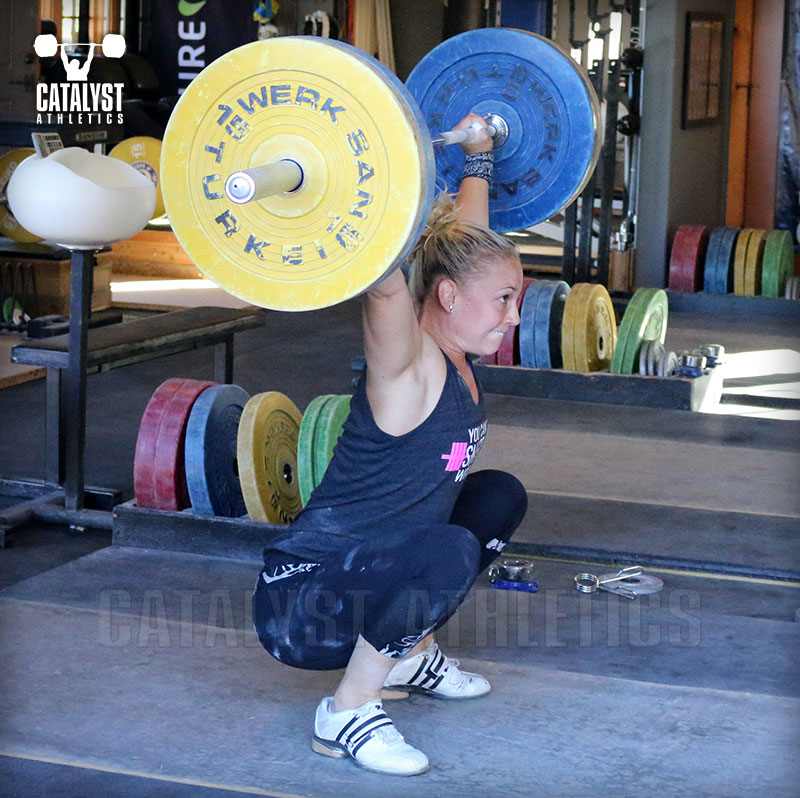 I tend to use complexes pretty regularly in the training programs I write for my lifters. Primarily their use is confined to preparatory mesocycles, i.e. we use them in the early phase(s) of a training cycle and drop them as we approach a competition. This fits with the basic principles of employing higher repetitions and total volume at the beginning of a cycle and reducing those things as the cycle progresses, as well as moving from somewhat less specificity to more specificity in exercise selection.

Complexes can serve a few purposes, and sometimes multiple purposes with a single application: If you listen to the Weightlifting Life podcast (if you don’t, ask your doctor what your problem is, because it’s serious), you’ve heard Ursula and I talk about the use of complexes for error correction many times; likewise, if you’ve read my book or many of my articles, you’ve seen this frequent use of complexes for this purpose.

Complexes allow the practice of a given element in need of work immediately prior to the lift in which it needs correction, and then the attempted integration of that corrected element into the lift itself. This is arguably the most effective error correction strategy available. It largely circumvents the conscious brain, which is often the nearly insurmountable problem.

The use of complexes for accumulating volume is pretty obvious—adding reps to an exercise, if the number of exercises and sets remain the same, will increase volume. This can be a great alternative to simply doing multiple reps in the snatch and clean & jerk, which can be anything from not advisable or not possible in many situations. As a simple example, if a lifter is weak in the clean because of squatting strength while the pull and turnover are strong and accurate, it may make more sense to do a clean + front squat complex than multiple-rep cleans. In other cases, there may be an injury or some reason a lifter can’t do multiple reps of a certain lift like the snatch or jerk; in such cases, you can accumulate more volume in a given exercise without repeating the problematic element while still allowing additional work on other elements.

Which brings us to the next reason for the use of complexes—the emphasis of certain elements of a lift. I essentially already explained this above, but think of this simply as an opportunity to provide more work on parts of a lift that need more work than others. If a lifter’s snatch pull is fine but his/her overhead position is weak and unstable, a snatch + overhead squat complex may be more useful than a set of multiple snatches; or if the pull is weak and the lifter overhead squats significantly more than snatches, a snatch pull + snatch complex may make sense.

Also related is the idea of pre-fatiguing or increasing demand. If we want to really force a lifter to be aggressive and/or encourage specific adaptation, we can tire out a certain element of lift prior to the lift. Using the snatch pull + snatch example, doing one or more pulls before the snatch is going to both physically fatigue the lifter in that movement, but also place them mentally in a position in which they may be less confident in the strength of the pull for the subsequent snatch—this forces the body to recruit more motor units and better coordinate them, and forces the lifter to be more aggressive, focused and confident to perform a successful lift. Increasing demand is similar in many senses, but it’s more likely going to be a way to make lifts of higher reps/volume and necessarily lower intensity more difficult.

Finally, complexes can be used for the sake of efficiency as I wrote about in my article Multidimensionality in Weightlifting Programming: Do More with Less. This idea is simple: everyone has restrictions on training time and volume, which means their will be limitations in how many exercises can be used in a given phase of training. Using complexes is a way to employ additional movements deemed important that can’t be, due to time limitations, added as independent exercises.

Following are some simple but effective complexes. These are complexes I use often, although I may use variations of them in many cases.

Snatch/Clean Pull + Snatch/Clean This is about as simple of a complex as it gets. One or more pulls is performed, followed by the complete lift. For error correction, this can be a good way to work on balance, bar path, aggression and posture in the pull. Variations of this can include things like deadlift or pull variations (e.g. halting or segment) and more than one pulling variation in sequence.

Snatch + Overhead Squat Again, very simple—this is an easy way to include additional overhead strength and stability work for the snatch without adding more exercises.

Clean + Front Squat + Jerk This is a great complex for working on leg strength and posture in the clean & jerk, as well as pre-fatiguing the legs for the jerk.

Power Jerk + Jerk This may be my favorite complex for the jerk. It will reinforce balance, posture and bar path in the jerk dip and drive for the split jerk, which is very often directed forward. In addition, it can help improve the height of the drive and the timing of the dip and drive.

Power Snatch/Clean + Hang Snatch/Clean This is a very effective complex for getting lifters to stay connected to the bar and meeting it correcting in the turnover. The idea is simple: the athlete needs to try to receive the bar at approximately the same height in both lifts. This will help teach the lifter to not drop out from under the bar and allow it to crash. Of course, it’s also a good way to fatigue and increase the demand of both the final extension and turnover.