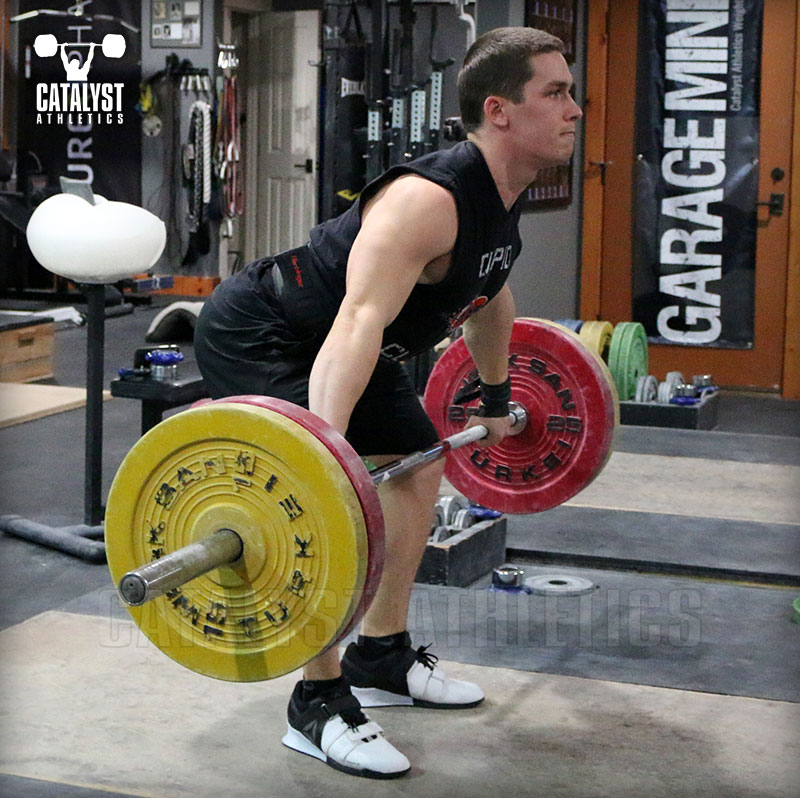 Now that I’ve laid out the basics behind the use of complexes for weightlifting, I want to get into more specifics. One of the important points with complexes is that they should have at least one specific purpose. We can use complexes in a very general way to accumulate more volume and similar basic programming goals, but we have the opportunity to fine-tune these exercises to best suit a specific lifter’s needs at a specific time in the training cycle. Why go half way?

The following complexes are useful for focusing on the pull of the snatch and clean generally, and each has a more specific emphasis to ensure its suitability for a given lifter. Of course the number of reps of each exercise in the complex can be varied for somewhat different effect.

This is a simple one: a snatch or clean pull + a snatch or clean. If a lifter has a relatively weak pull or needs some additional work on the pulling movement or position, this is a solid go-to. Not only will the lifter get additional practice with the pulling movement, it will transfer into the following lift to improve it and fatigue the lifter slightly to encourage more aggression. Variations to the pull can be made such as pauses or slow tempos to emphasize certain points or positions.

This is just a simplified version of the above—it’s more appropriate for a less experienced lifter who has more serious technical or strength issues in the pull. For example, a lifter who tends to shift and tip over the bar early in the pull or who has trouble establishing and maintaining the proper balance over the foot during the pull. Because it’s a slower, simpler movement, the athlete is better able to focus on these kinds of details and make little corrections along the way.

In addition to the obvious benefits it shares with the two previous complexes, the halting deadlift + lift focuses specifically on practicing and strengthening the position of the lifter when entering the second pull, allowing him/her to better stay over the bar with the shoulders longer and improve timing, balance, bar contact, and bar path. Typically the pause would be at mid to upper thigh in this case for 1-3 seconds. A variation of this would be a pull to hip + lift, which is simply a halting deadlift to the hip position without a pause in that position. This can similarly help improve the movement but will provide less actual strengthening of the position relative to the halting deadlift—useful if strength isn’t a primary issue, or if the goal is to go heavier in the subsequent lift, which can be done due to less back fatigue.

Using a pull or deadlift with multiple pause positions on the way up essentially just multiplies the effect of the halting deadlift + lift complex. With this exercise, more specific positions can be addressed at the same time. A typical series of pauses would be 1 inch off the floor, at the knee, and mid-thigh—this hits the most important positions in the pull, strengthening postures and reinforcing the feeling of proper positions and balance. Also great for lower back strength and stamina, because this is a lot of isometric work. A single pause position can also be effective—what differentiates this from the halting deadlift complex is that the deadlift or pull is completed to extension following the pause, making it a good choice if you want to focus both on the pause positions as well as the motion, balance, timing and/or aggression of the final extension of the pull.

This is an interesting one that requires two bars or two willing training partners. One or more pulls will be completed with a weight heavier than the subsequent snatch or clean. For example, you may do a pull with 110kg followed by a snatch with 90-100kg. This complex gives you the benefits of the standard pull + lift complex, but adds more strengthening and confidence, as well as (at least theoretically) some neurological stimulation that will aid in the subsequent lift. The trick is to transfer bars (or have your pals strip the extra weight) quickly to maintain a decent rhythm—don’t take 20 seconds between reps.

This complex focuses more on the final extension of the lift to improve position, timing and explosiveness. The pull from the floor allows you to keep that piece of the lift intact so it’s not being neglected by hang work, and it can help encourage a better extension in terms of distance, direction and timing. Performing a hang snatch or clean afterward means needing to generate more force in less time, and doing so when a bit fatigued from a complete pull before.

Finally, a power + full lift (from the floor or hang) is a simple way to encourage a better finish in the pull, both with regard to the degree of extension, but also the speed. Lifters will often naturally move faster with power movements than with full movements because of the unconscious knowledge that they have so much more time to get under the bar. The idea here is to try to execute the full lift with the same speed and aggression as the power. Taking the full lift from the hang will further force that speed and aggression.

Yes. There are a million options you can play with. These will give you a baseline to work from. Just make sure what you’re doing is sensible and has purpose.

gerasimos
coach very good and informative article...can i ask you something about the pull+lift combo?which percentages you suggest from max clean or snatch for the below rep schemes in pull+lift combo? 3+1(3clean/snatch pulls+clean/snatch) 1+3(1 pull+3 lifts) 2+1 1+2 2+2 ?
Depends! If you're using it for more technical work, 70-80% range likely. If you're trying to train it as heavy as possible, you'll be able to get to 90%+, at least with some exposure to the complex.