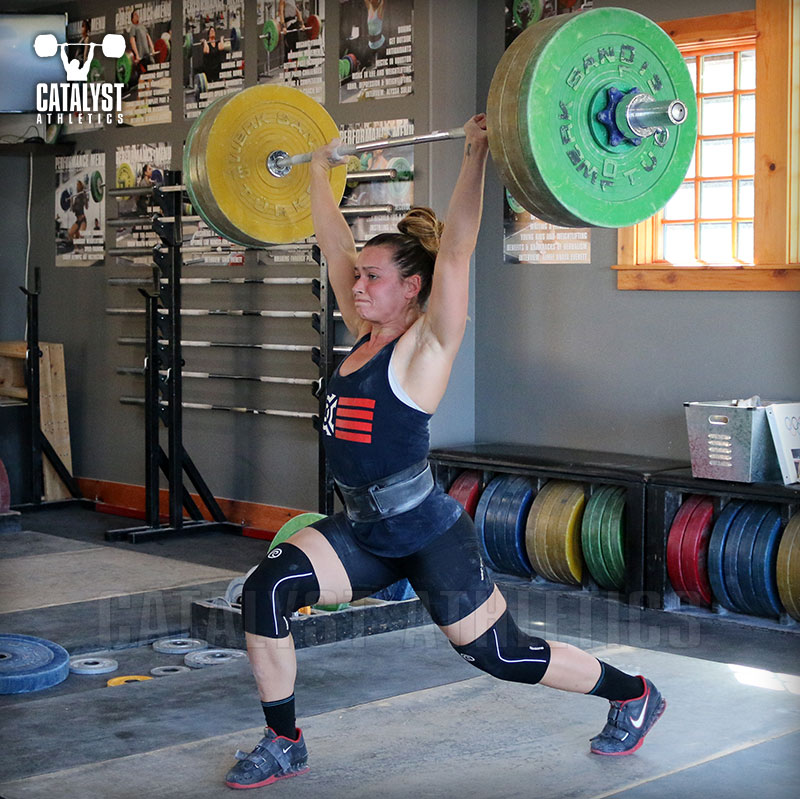 See more articles & videos like this in the The Split for the Jerk collection.
I’ve now said this so many times to preface articles about the jerk that pretty soon I’ll have to stop, but the jerk tends to get far less attention technically than the snatch and clean. People will discuss mind-melting minutia of the tiniest elements of the snatch for months, but ask those same people about details of the split in the jerk and you’re pretty likely to get a bewildered look and a response along the lines of just jump into kind of a lunge.

One of the elements of the split I find myself having to point out many times is the position of each knee in order to turn a weak, unstable split into a solid receiving position.

More commonly understood is the optimal position of the front knee. Nearly everyone who’s even just dabbled with the Olympic lifts has been told at least once to keep the front shin vertical. In other words, the knee should be vertically above the ankle. I take that even further and say that I want the knee directly above the ankle or even slightly behind it.

The rationale for this is simple, and you can test the position out right now if you’re curious. Step into a split position with the front knee even slightly in front of the ankle and put some weight on it and try to resist. Now pop that front foot out a little farther forward so that the knee is slightly behind the ankle and put some pressure on it. You’ll be noticeably stronger and more stable in the second position.

Imagine the split position under not only a lot of weight during a jerk, but also possibly a little extra forward force because you didn’t do it perfectly and you should be able to understand why this is so important—you need to be able to stop your body and the bar from shifting forward so you can get it still and secure.

The back leg in the split jerk comes in all sorts of fascinating positions among lifters ranging from good to I can’t even look because I don’t want to watch a catastrophic orthopedic injury. I instruct lifters to have the back knee unlocked—it doesn’t need to be bent dramatically, but it absolutely shouldn’t be totally straight.

Primarily this is because a totally straight and stiff back leg means that once the feet are in contact with the floor (which occurs prior to the arms locking out overhead), the only way the lifter can get lower is by bending the front knee—and if the back leg is locked, this means shifting forward and very likely leaning forward into a less structurally sound position. If both knees can bend together, the lifter is able to achieve the necessary depth straight down under the bar.

Some lifters will bend the back knee excessively, and this can create problems of its own. It’s pretty easy again to feel this for yourself. Get into a split position in which your back knee is significantly bent—close to 90 degrees—and see how you feel holding that position for a while. Now step longer so the back knee is bent just a little and hold that for a while. Unless you’re doing something wrong, the straighter back leg position will be a lot easier to maintain.

If you’re not sure if your split is long enough or if your back knee is bent too much, just look down and see where the back knee is relative to your hips. If it’s behind the hips, you’ll be strong and solid; if it’s directly below or even in front of the hips, you’re in trouble.

Keeping the back knee bent a little will also take a lot of pressure off the rear leg hip flexors, preventing strains there and also reducing the likelihood of hyperextending your lower back.

Obviously practicing the correct split position in every jerk you do is a good plan—this means two things. First, if you land in a bad split position, fix it! Hold the bar overhead and adjust your feet until they’re right, and then hold a bit longer. The more time you spend the correct position, the more consistently you’ll begin getting there in the first place. Second, hold all of your jerks in the receiving position for 2-5 seconds before recovering. Not only will this strengthen the position and get you more comfortable there, but it will allow you to actually recognize poor positioning and balance in the first place. If you have a habit of bouncing out of the split immediately with every jerk, it’s likely you’re masking improper position and balance, which then becomes clear as you get heavier and can no longer get out of the position quickly enough to avoid the problems it causes.

Other exercises that will help learn, practice and strengthen the correct split position are:

the Suharev clean and jerks posted by ATG is a great example for this and shows how he may have missed the last jerk... Great article.

Ivan Kolov
I've seen pictures of Schemansky with his front knee way over his ankle. I saw a 60+ Masters lifter jerk 130 KG @ 77 KG Bwt also with front knee over ankle. Technique is a lifter by lifter case, not every lifter is alike. Writing a book or having a web site does not mean you have all the answers.
Three things for you:

1) Nowhere in the article did I say it was impossible to jerk with the knee in front of the ankle. It happens quite often, especially in competition, as do a lot of suboptimal things when lifters are attempting maximal weights. The position described is stronger and more stable, not absolutely necessary for success, and you can argue that point all you want but it won't change simple facts of biomechanics that have nothing to do with my personal opinions.

2) I'd be willing to bet you saw a photo of Schemanksy split snatching, not jerking - completely different split position used to get as deep as possible and with a forward knee position exactly like you would see in the squat that eventually replaced the split for the snatch and clean. Find photos of him jerking, and you'll see the position I describe in this article (like right here, for example).

3) You're allowed to jerk in whatever manner you please. I can assure you that I genuinely don't care what you do.