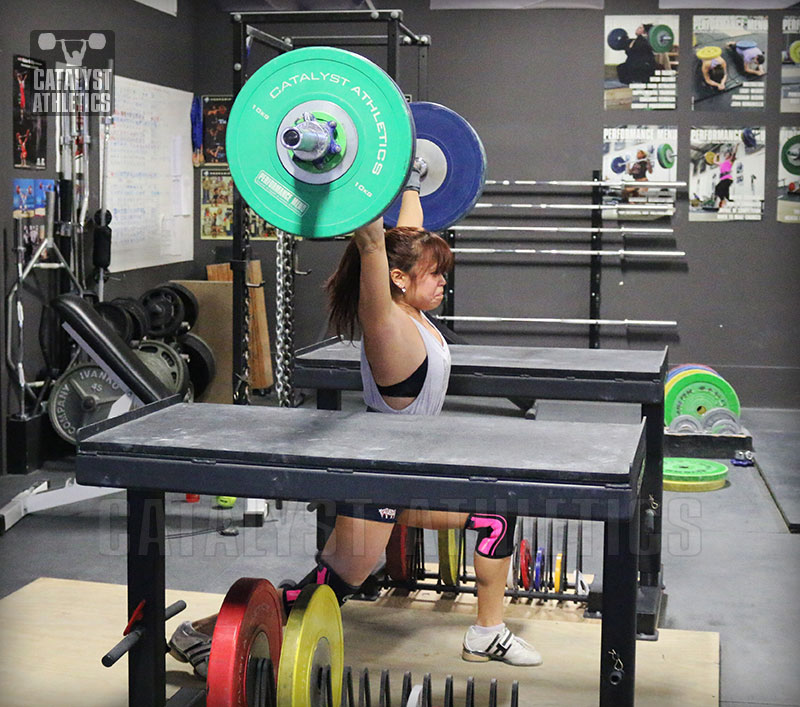 See more articles & videos like this in the The Split for the Jerk collection.
I joke in the gym that the split jerk is just a power jerk into a split position—in other words, quit making it so complicated and changing the entire movement rather than just the footwork. The dip and drive should be no different between the two jerk variations. Of course, just telling you to quit overcomplicating things and do it right probably won’t work (never does with my own lifters), so I’m going to cover some drills and exercises to help your footwork in the split jerk.

The tall jerk is one of my favorite technique drills for the jerk and is useful for a number of problems. In this case, it allows the lifter to reduce the movement to focus on the footwork, balance and timing of the push under. There are a few variations of the drill—starting on flat feet or on the balls of the feet; and starting with the bar on the shoulders or pressed halfway up. Start with the variation that allows you to perform the footwork most accurately. This will likely be the half-press flat-footed variation initially.

The key is beginning in balance and maintaining that balance in the split. As soon as your feet hit the floor, you should be balanced approximately evenly between the front and back foot with your hips under your shoulders. Hold the split position for 2-3 seconds before recovering properly to reinforce this balanced position. Use light weights—an empty bar to maybe 30% of your best jerk.

The jerk balance is an exercise I use in my jerk teaching progression, and is also a good technique primer and drill later in the process. This exercise is often performed improperly, in which case it completely loses its effectiveness and can actually be counterproductive. Do it right or don’t do it at all.

Start with the bar in the jerk rack position and step into your full-legth proper split receiving position. From here step about a foot-length back to a third of the distance—not too far. Starting here in equal balance between the feet, dip straight down and drive straight back up (i.e. the bar should move vertically down and up), and the lift and step the front foot into the full split position as you punch the bar up into the overhead position. Think of actually pushing the bar back slightly to put it behind your head as the front foot moves forward. Be sure that when your front foot hits the platform, you’re immediately balanced evenly between the two feet. The worst thing you can do is dive your head and chest forward in this drill—that’s exactly what it’s intending to correct. Bar goes up and back, foot and hips go forward. This exercise can be done with very light weights like the tall jerk, but it can also be done surprisingly heavy—however, remember that its effectiveness is based entirely on its accuracy. More weight means nothing, and will actually be harmful, if the movement is incorrect.

We can break up the useful exercises into categories based on exactly what problem(s) need to be corrected. I’ll break it into 3 groups: improper dip/drive mechanics and/or balance; improper split position; and weak split position.

This is a very common problem in the jerk because of its totally knee-dependent posture and movement and the relative discomfort and unfamiliarity with such a position and movement most athletes possess. If this movement isn’t correct, the likelihood of the footwork being correct is low; and even if the feet actually end up where they should, the lifter won’t be position and balanced correctly.

The push press is the simplest exercise to help force a balanced and properly directed dip and drive. Because the lifter’s feet stay connected to the floor throughout the movement, there’s virtually no way to shift forward (or backward). The dip and drive of the push press and the timing of the transition between the final thrust of the legs and the push of the arms should be the same in the push press as it is in the jerk, so the push press offers a lot of beneficial transfer to the jerk.

The next step would be the push jerk. Note here that I define a push jerk as being a jerk received in the power position but with the feet remaining connected to the floor throughout rather than being lifted and moved. This is especially important in this case because this connection of the feet has a similar effect as what I talked about in the push press above—it helps force the lifter to remain more balanced and properly orient the drive and push against the bar.

If the dip and drive is balanced and properly timed and aggressive and the footwork still isn’t right, it’s time to look directly at the feet and use drills like the ones above, or consider the following.

If a lifter doesn’t know the proper split position, he or she needs to learn and practice. This can be done with the drills above and with simple footwork-only drills transitioning from the drive to split position. The next step would be more aggressive exercises that involve both the practice and reinforcement of the split position, but also some strengthening.

The push jerk behind the neck in split is another one of my favorites. This could really be in either the drills or exercises category depending on when it’s done and how it’s loaded. The key, like the drills above, is the proper split position and the maintenance of equal balance between the two feet throughout the movement. It will reinforce the position, familiarize the lifter with the feeling, and strengthen the body to support it.

The drop to split and jump to split will allow direct focus on the footwork. These exercises can be done with no weight or very light weight if a great deal of work and practice needs to be done, or they can be loaded very heavy if a combination of practice and strengthening of the position is required. Again, avoid loading these exercises to a point at which you can’t perform the movement properly, or you’re reinforcing whatever problem exists.

The walk to split or step to split puts even more emphasis on strengthening the position but reduces the footwork practice by using movement of the front foot only.

Finally, if the lifter is simply weak in a split stance, basic unilateral strength exercises like lunges and split squats can be used to shore up the weakness.


Look Beyond the Above

It’s important to keep in mind that poor footwork in the jerk may actually not really be directly related to the feet at all. If certain things are happening (or not happening) prior to the split, correct footwork can be impossible. In these cases, the poor footwork is a symptom of the real problem, not the problem itself. The most simple example is inadequate drive on the bar—without sufficient speed or elevation, the lifter can’t be expected to move the feet into position. In such a case, doing footwork drills won’t do anything to help the problem.

If your timing in the transition between the drive and split is wrong, there will be too little time and space for the feet to move into position no matter how quick you are or how accurate your footwork is in isolation. This timing and rhythm can be worked on with push presses and split jerks behind the neck.

If you don’t have enough drive up on the bar, again, your feet aren’t going anywhere. Most commonly this will look like “short-stepping”—the front foot not reaching far enough forward. In your defense, there’s no way it can because there isn’t enough time or space. Exercises like jerks behind the neck, power jerks, jerk drives, jumping squats, jumping quarter squats and back squat jumps can all be helpful.

Get a huge amount of technique error diagnosis and correction help for the jerk (and snatch and clean) in the all-new 3rd edition of my book, Olympic Weightlifting: A Complete Guide for Athletes & Coaches.