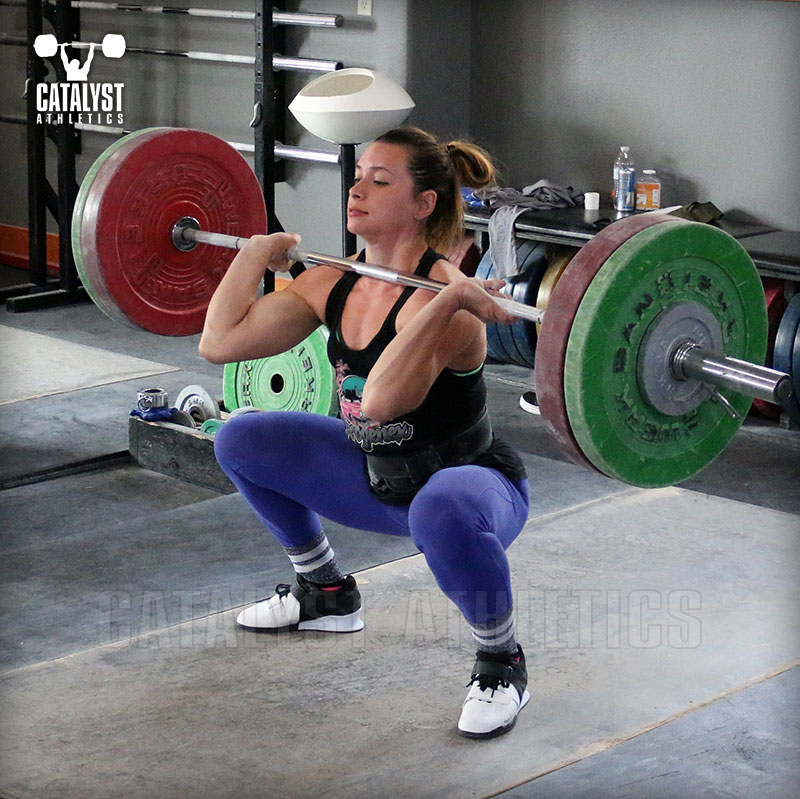 See more articles & videos like this in the Snatch & Clean Third Pull & Receipt collection.
Recovering from your cleans at maximal speed isn’t just something that looks good—it results in less effort and fatigue, meaning more weight and a better shot at the subsequent jerk.

The easiest way to stand up out of your cleans faster is to not be very good at cleans and consequently only clean a small percentage of your best squat. Presumably you think that’s about as good of an idea as I do, so we’ll get to some actually helpful suggestions.

First and foremost, you need to know how to clean well. If you’re chasing the bar all over the platform every time you clean, it shouldn’t be surprising to you that you can’t just pop right up out of the squat. Any deviation of bar placement or positioning of your body from optimal is going to mean adjustments (intentional or reflexive) that prevent an immediate recovery, and suboptimal mechanics, which means more effort is required to move the weight. The most obvious example here is a lifter who continually allows the bar to move forward or fails to bring it back into the rack position, placing it too far forward when it’s received.

Being technically proficient, along with ideal positions, also means meeting the bar well in the turnover and timing the transition out of the squat properly. If the bar and body connect well, crashing is avoided, which disrupts proper timing, can create movement in the trunk that absorbs force from the legs and reduces force that would otherwise feed into the stretch-shortening cycle we want in the legs, and of course can create deviations from proper positioning. Similarly, if the turnover is slow, the bar won’t connect with your body until you’re too low in the squat to create much of a stretch-shortening reflex because of the minimal loaded eccentric distance.

Finally, if your squat position and stance are not correct, you’re going to suffer.

Part of proper clean technique is utilizing the bounce. This is not just the stretch-shortening reflex of the leg muscles, but also the elastic whip of the barbell and the collision of the upper and lower legs and their literal bounce off of each other.

All cleans, along with front squats, should be trained using the bounce, unless there is an extremely compelling and specific reason not to temporarily. This is a neurological pattern that needs to be learned and practiced, and experience will also condition the joints.

Postural strength will also determine how quickly you can stand from a clean to a considerable extent. The more stable and rigid your trunk, the less the bar and your body will deviate from the optimal positions when receiving the clean (preventing the previously described problem), and the more of the force your little legs are producing will actually be transferred into the barbell rather than absorbed by a soft trunk. Ensuring you’ve properly pressurized and stabilized your trunk prior to starting the lift is critical. Make sure you’re also doing your back and ab work.

Having adequate mobility to sit comfortably into a full-depth squat is a pre-requisite for solid cleans and the ability to catch the bounce out of the bottom. If you’re unable to close the knee joint adequately in the squat, you don’t have the ability to arrest the downward movement in part with the rigid skeletal structure and have to rely entirely on muscular effort. That means less speed and a slower transition, which in turn means a weak stretch reflex and less speed and more effort in the recovery. If you can’t sit into a deep squat with a very upright posture, you’re also set up for more trunk collapse, which again means less force of the bar going into the legs to create a better bounce, less whip of the bar, and less of the force of the legs moving the bar up as you stand. Additionally, mobility limitations can force you out of position and result in the negative effects discussed previously.

It seems odd to have to point this out, but experience tells me I do—if you want to stand up quickly from your cleans, you have to actually try to stand up quickly from your cleans. Your legs will not magically launch your lazy ass up out of the squat because you one time thought about how great that would be. Every single time you clean, you need to be prepared for the proper timing and rhythm, and then make it happen by doing all of the above, and then accelerating up maximally until you’re standing. The last part of that is important—many times a lifter will try to move quickly initially, but then let off the gas partway up and suddenly find it was too soon and have to grind through the rest of the squat or get stuck entirely and fail. Accelerate all the way up.

Some lifters will naturally be much faster than others for a number of reasons over which neither you nor they have any control. Genetic factors like having more fast twitch fibers in their legs and being shorter-legged and having the superior squatting mechanics as a result relative to longer-legged lifters are not things that can be changed, so don’t worry about it. Work with what you have.

Aside from dialing in your clean technique, training the bounce in all of your cleans and front squats, making sure to pressurize and stabilize your trunk when you clean, doing your back and ab work, and having the proper aggressive mindset, you can also try the following to help improve your speed out of the clean:

Vladimir
Is there a reason you specify to always train the bounce when front squatting, but not back squatting? I realize that you included "performing all squats with the bounce..." at the end of the article, but your recommendation doesn't sound as adamant as it does for front squats. I'm not trying to nitpick, just curious.
Vladimir - The reason for training the bounce in the front squat is because it will transfer over to clean strength and technique, and the 'bounce' is important in the clean.