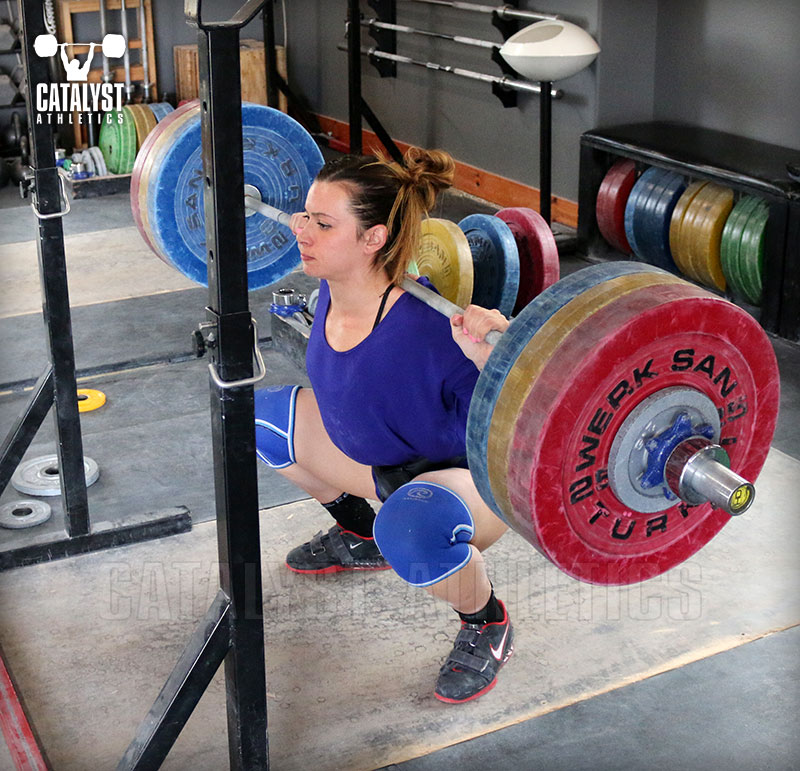 Everybody wants to know the training secrets of the best lifters in the world.

When you’re new in the sport, you often think elite weightlifters have some kind of hidden treasures in their training programs that make them so much better than everybody else. This is usually a mistake, but it’s an understandable one.It’s become a much more frequent mistake over the last ten years since social media blew up, because several famous lifters are putting unorthodox/bizarre training exercises on the internet, trying to convince you that they have the mysterious keys to the kingdom (which they’ll share with you if you pay them a lot of money). Adding to the problem is our current culture’s obsession with the idea that new equals better.

So in the mainstream lifting community’s frantic quest for anything that sounds more complicated than basic fundamentals, one of the conversations that comes up occasionally is the debate over the value of front squats vs. back squats. Is one of them more important than the other? How should they be used in training?

Specifically, let’s take a look at the idea that front squats are the ONLY type of squatting a weightlifter needs. I’ve heard this more than a few times over the years. People seem to develop this idea that because the front squat has such a direct connection with the clean and jerk, and because it’s a great way to make your legs stronger, it’s the only thing you need to do. Back squats aren’t necessary.

I disagree with this. You should use both back squats and front squats in your training. Eliminating back squats will be a bad idea for 99% of you.

Where does this debate get started? In many cases, it starts when people hear about elite weightlifters who front squat only… no back squats. There have been some pretty noteworthy examples of this. Here are three big names I’ve heard it about:

Naim Suleymanoglu The three-time Olympic champion from Turkey who’s generally regarded as the greatest lifter in the history of the sport. I read an interview with Naim sometime around the 1996 Olympics where he said he only used front squats in training.

CJ Cummings The current wunderkind of American weightlifting, multiple Youth and Junior World Champion, youth world record holder in C&J. CJ is the best lifter in the world in his age and bodyweight division. An article was published online recently that stated CJ doesn’t do back squats at all because he tried them when he was getting started and they bothered his knees. However, his coach has stated that he does back squats for several weeks at the beginning of his training cycles. So the reports of him doing front squat only are exaggerated, but it’s true that he doesn’t do them full-time.

Tom Gough 1996 US Olympian, US record holder for decades. One of the best American weightlifters of all time, Tommy lifted weights back in the late 90s that Americans are still struggling to catch. Right around the time of his biggest successes, he told me that he was basically doing front squats only.

These guys were all tremendously successful using primarily front squats, but I want to explain to you why you probably shouldn’t follow their examples. You have to read between the lines and think a little deeper about the whole thing.

First of all, you need to understand that most of a weightlifter’s lower body strength will be developed through back squats, especially in the beginning/intermediate years. The lifter is going to handle much heavier weights in the back squat than the front squat, and those heavy weights are going to stimulate tremendous muscle growth in the legs, glutes, spinal erectors, core, and just about everything else.

The front squat is an essential strength developer for Olympic lifters as well, but it’s used more for strengthening the posture and positions of the clean. Yes, it’s obviously a terrific leg strength exercise.But it’s even more vital in the development of the torso, shoulder girdle, arms, and all the other north-of-the-waist muscle groups that are needed to secure a big clean on the shoulders.

They’re both important, and you should be using both of them in your training. So how do we account for those champions I mentioned who only mainly/only front squats?

First of all, you have to keep in mind that both Naim and Tommy were using front squats only during the most advanced years of their careers. By the time they reached this point, they had already stockpiled years and years of leg strength through back squats in their early-middle phases. We know Naim was raised in the Bulgarian Abadjiev system, and we know back squats were an essential staple of this program.And I knew Tommy Gough from the time I was 17 years old. We trained in the same camps, competed against each other, and our coaches were close friends. I know he did plenty of back squats when he was on the way up, just like we all did.

With CJ, we know it’s a different situation. Sure, he only uses back squats at certain times. However, there’s something you need to remember. Cummings did a 185 kg C&J at 69 kg bodyweight when he was 16 years old, okay? That means this kid has a set of physical gifts that are much different from most people in the world. His training can be set up differently from everybody else because he’s drastically more talented than everybody else. He’s that rare Haley’s Comet kind of lifter that we don’t see very often. Some of the normal rules of weightlifting can be adjusted when you’re talking about an athlete with physical ability of this level. I could name you several examples of phenom athletes in other sports I’ve seen over the years who had similar situations, training programs that were set up to accommodate their special gifts.

But if you want the most reliable training approach you can find, you need to look at what works for the vast majority of high performers in the sport… not the extraordinarily rare exceptions to the rules. In this conversation, you can be completely assured that almost all of the successful Olympic weightlifters on the planet use both front squats and back squats.

Is there a chance you might have success doing front squats only? Sure there is. It’s always important to acknowledge that none of the rules of the sport, including the ones I believe in, are always going to apply equally to everybody. Individual exceptions are out there, and they don’t have to be Suleymanoglu-level talents. You might be one of them. However, the point we’re trying to make is that it’s generally going to be smarter to use the methods that produce the most wide scale accomplishment, as opposed to the exceptions. This is especially true in the development years, which is where most of you are.

Hell, you could even find some rare examples in the opposite direction if you looked around enough. I stopped doing front squats when I was 32 years old because they were just beating my body up too much. When I was 37, I did a 138 kg snatch and 165 kg C&J. So that’s five years with no front squats, and I still totaled over 300 kg when I was almost 40.

Just some food for thought.