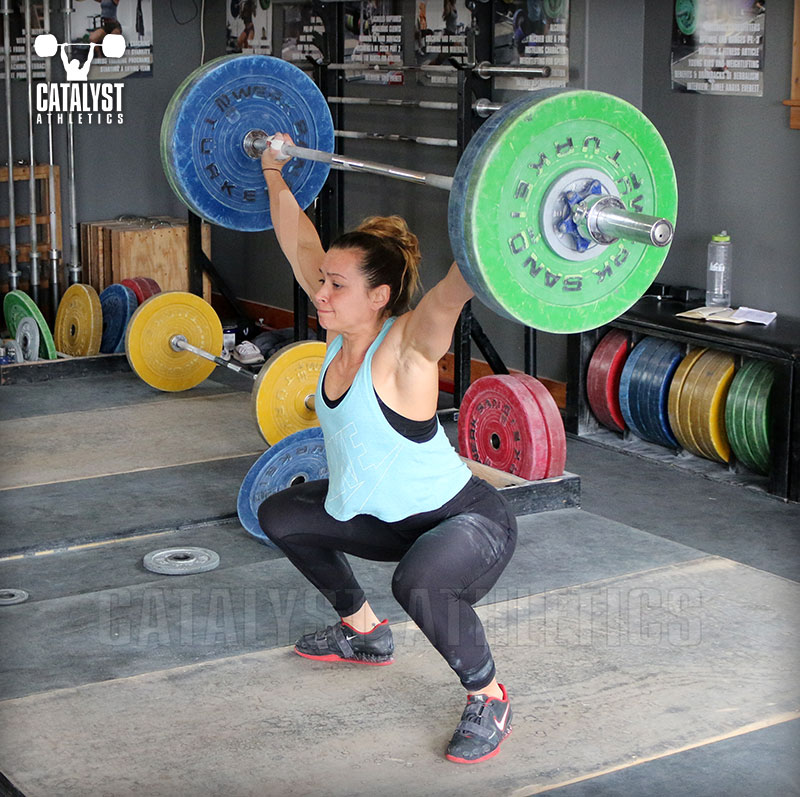 Okay, let’s do a quick chat about something I’ve seen occasionally throughout my years in weightlifting.

Obviously you all know what power snatches and power cleans are, so I’m not going to do a lengthy description here. Some weightlifting coaches use them in the training of their athletes, for a variety of reasons. Greg’s exercise library on the Catalyst Athletics website says this about power snatches: “The power snatch can be used to train speed and force production in both the second pull and the third pull by limiting the amount of time and distance the lifter has available to get under the bar. It can also be used as a lighter snatch variation for lighter training days. The power snatch can also be useful as part of a learning progression for beginners, or as a variation for individuals who are not mobile enough to sit into an overhead squat.”

That’s about as accurately as I could describe the use of power snatch (and clean) myself, so I’ll just leave the explanation there.  However, the thing I’m thinking about with this article is a related issue with PSN/PCL (those are fancy abbreviations for power snatch and power clean).

I’m specifically talking about the way coaches evaluate and classify PSN and PCL when their athletes do them in training. Some people seem to have this idea that you should judge a PSN or PCL like you would judge the depth of a squat in a powerlifting meet.  It’s the old “If it’s above parallel, it’s a power snatch” mantra. This results in athletes loading up weights that are pretty close to their personal records in the snatch or clean, hitting lifts where they catch the bar just a few inches above their full bottom position, and then running around and telling everybody they power snatched/cleaned the weight because it was right on the razor’s edge of a parallel depth position. In many cases, when you look at these lifts, they don’t look much different from the athlete’s full bottom position snatch or clean. You can just tell they’re putting the brakes on right before they bottom out their depth, resulting in a lift that’s basically a full snatch/clean minus an inch or two. Yet they call these lifts power snatches or power cleans.

Since social media blew up, I’ve seen this a lot more.  Athletes put videos of these lifts on Facebook or wherever and talk about how much they can power snatch/clean, often asking other people to chime in with their opinions about whether the lift was a legitimate power movement, based on the depth.

I think this whole situation misses the point of why/how PSN and PCL should be used in the training of a weightlifter.

First of all, it’s my opinion that PSN and PCL shouldn’t be overused or overemphasized with competitive Olympic lifters. They’re legitimate training tools with value, and they have their place in a lifter’s program…in certain situations. They’re assistance exercises. Greg’s description of their place in a weightlifter’s program sums it up pretty well. But if you’re a competitive OLifter, the clear majority of your practice should be on full bottom position movements. You’ll never really master the full snatch or clean if you spend too much of your time power snatching or power cleaning. Hitting the bottom position of the SN/CL is a skill that has to be sharpened through thousands and thousands of reps.

PSN/PCL are most beneficial when they’re done with high receiving positions, around quarter-squat depth.  I’m talking about the kind of movement you most commonly visualize when you think of a power snatch or power clean. The video demonstrations of these movements in the Catalyst library are exactly what I’m talking about. This is how weightlifters should do them.

If you’re concentrating your efforts on the depth of your PSN/PCL and putting your energy into lifting weights that are heavy enough to necessitate questions about whether the lift was above parallel, you’re running the risk of screwing up the timing and position you’re supposed to hit in the full movements. Those right-at-parallel PSN/PCL are creating a different kind of movement, where you’re getting close to your full bottom position but halting the lift abruptly to keep it above parallel. If you don’t have Nicu Vlad-level mastery of the lift’s technique, you can easily wind up with some inconsistencies in your movements that leave you looking like a giraffe standing on a telephone pole when you try to stick maximum weight full lifts in the bottom position. You don’t have the lift developed the proper way, so you pay the consequences with wobbles and wiggles.

I’m not saying it’ll always happen like this. But I’m definitely saying it’s a possibility that could leave you with lousy technique. Here’s my opinion: If you’re going to do PSN or PCL, do them with weights that allow you to catch at that high receiving position in the video. And if you’re going to do full SN/CL, just do the full movement without any of this “parallel or not” business. Remember…this sport isn’t just about pulling. It’s also about catching.

Use these lifts for what they are…assistance exercises. Don’t get sucked into the ego game of trying to show the universe how much you can power snatch or power clean. Because I’ve got news for you…absolutely nobody cares. People ask me sometimes what my best power snatch is, and my answer is, “I have no idea.”  I did them in training for the first couple of years of my career while I was learning, and then never did them again. And I managed to snatch over 300 lbs in competition for 15 straight years, with a lifetime best of 155 kg.

You can handle your training any way you like. This is just a thought that’ll hopefully expand your understanding of this game. Add it to your toolbox.