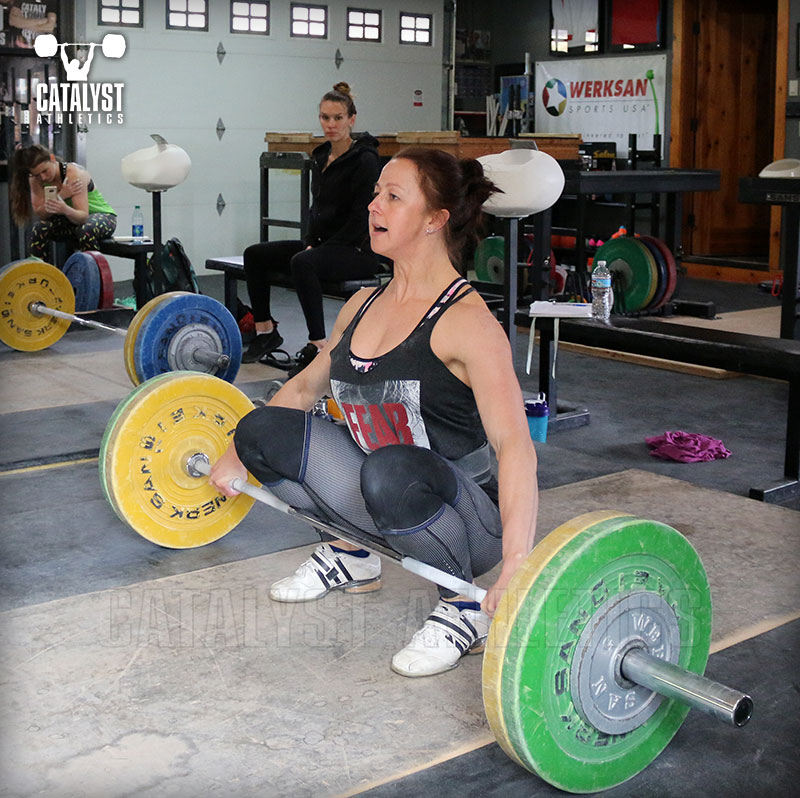 See more articles & videos like this in the Snatch & Clean Starting Position & First Pull collection.
Dynamic starts in the snatch and clean are used by the majority of elite weightlifters, and for good reason. However, like many things done by elite athletes, in many cases a dynamic start will not be appropriate for you yet. Yes, I know they look cool and make you feel like a more advanced lifter, but your choices in weightlifting should be focused on one thing—maximizing your performance not just now, but over the long term to reach your full potential. Trying to rush the developmental process is a great way to slow it down and actually limit your ultimate performance. So let’s sort out the dynamic start so you can understand why and when to use it to your advantage, and how to avoid letting it negatively impact your lifting.


What is a Dynamic Start?

What is the Purpose?

A dynamic start will make the separation of the bar from the floor and the initial pull easier through the mechanism of either a stretch-shortening reflex or the generation of more muscular tension prior to separation. For lifters who quickly pump the hips down into position and immediately break the bar from the floor, there is usually sufficient speed to elicit a stretch-shortening reflex.

For athletes who instead perform a movement such as sitting the hips down slowly and then lifting them back up into position to initiate the lift will be generating tension in the muscles prior to moving the bar so that more force will be developed by the time the lift begins.

In either case, the separation of the bar will be made easier, incurring less fatigue, increasing the speed of the pull and generally increasing the lifter’s confidence and consequently his or her commitment to the lift. Experimentation by Glyadkovsky and Rodionov showed that a dynamic start produced on average a 2.5 cm increase in snatch pull height relative to a static start. Additionally, certain dynamic starts can make it easier improve the arch of the back in the pull.

For advanced lifters who are snatching and cleaning large percentages of their basic strength capacities, and in particular, those who are possessed of less advantageous proportions for this segment of the lift (i.e. longer-legged and/or taller), the dynamic start can essentially be a necessity for near-maximal and maximal lifts.

Sit-Through In this start, the athlete will typically set the back arch with the hips in a high position, and then in one continuous motion, slowly lower the hips down past the starting position and into a deeper squat, often leaning the shoulders back behind the bar, and then bring the hips back up, separating the bar from the floor and beginning the lifts as the hips reach the starting position.

Hip Pump Typically with this start, the athlete will set the starting position momentarily, and then quickly lift the hips up and pump them back down into the starting position, breaking the bar from the floor with this downward pump. The lifter may perform a single pump or a series of pumps before lifting. The study by Glyadkovsky and Rodionov found the “double pump” dynamic start (two consecutive hip pumps) to be the most effective; however, this style makes proper balance and position upon separation of the bar from the platform difficult.

Slow Descent Somewhat of a combination of the previous two, the lifter begins with the hips high, usually with the back already arched, and slowly lowers them into the starting position, generating tension throughout the legs and hips, and then breaking the bar as the hips reach the final starting position.

Low Sit The low sit can be considered a variation of the sit-through. Rather than starting in a high-hipped position and squatting through and then back up into the starting position, the lifter begins sitting in the low squat, and then creates tension and lifts the hips into position, breaking the bar from the floor as they reach the proper height.

The Rip This start is usually the sign of a very aggressive lifter. After sitting in a squatting preparatory position with the stance and grip set, the lifter will abruptly launch into the start of the lift, essentially yanking the bar off the floor (Bulgaria’s Zlaten Vanev is probably the most recognizable user of this type of start). This start can make it a little more difficult to set a proper back arch, and also can create a problem with a reduction in bar speed after the initial acceleration.

Dive Start The dive start is a very rare style, mostly associated with David Rigert of Russia and Wes Barnett of the US. It’s also more likely to be used in the clean than the snatch. In this start, the lifter begins in a fully standing position at the bar, and then simply reaches down, grabs the bar and immediately lifts. While this may make it easier for some athletes to set a better back arch, it’s very difficult to ensure a secure grip and proper position and balance when separating the bar.

The worst candidate for the dynamic start is the new lifter. A dynamic start increases the potential for inconsistency in position and balance in the start and first pull of the lift; for a lifter whose technical consistency is already low, this is simply counterproductive. New lifters need to develop consistency before introducing complications.

The good news is that new lifters don’t need the assistance of a dynamic start. No technically inconsistent lifter is snatching or cleaning enough weight to necessitate the increased force production and speed of a dynamic start. When you’re snatching 40% of your deadlift, don’t tell me you need help getting the bar moving off the floor.

Don’t make the mistake of trying a dynamic start right out of the gate and thinking, that feels way easier and I just made a PR with it, so it must be a good idea. In the earliest stages of lifting, we often see fluke PRs—they’re more representative of luck than genuine improvement. If you don’t have consistency, you don’t even have the ability to accurately evaluate the effectiveness of a dynamic start.

Taking the time to develop technical consistency in the starting position and first pull will ensure maximal effectiveness of a dynamic start when it’s introduced later.

Justin Escalante’
Thank you for this one, Greg! I’m still in my first year of weightlifting and used a dynamic start for my snatch a few months back and my coaches said the same thing. I typically used it to stretch out my upper thoracic.