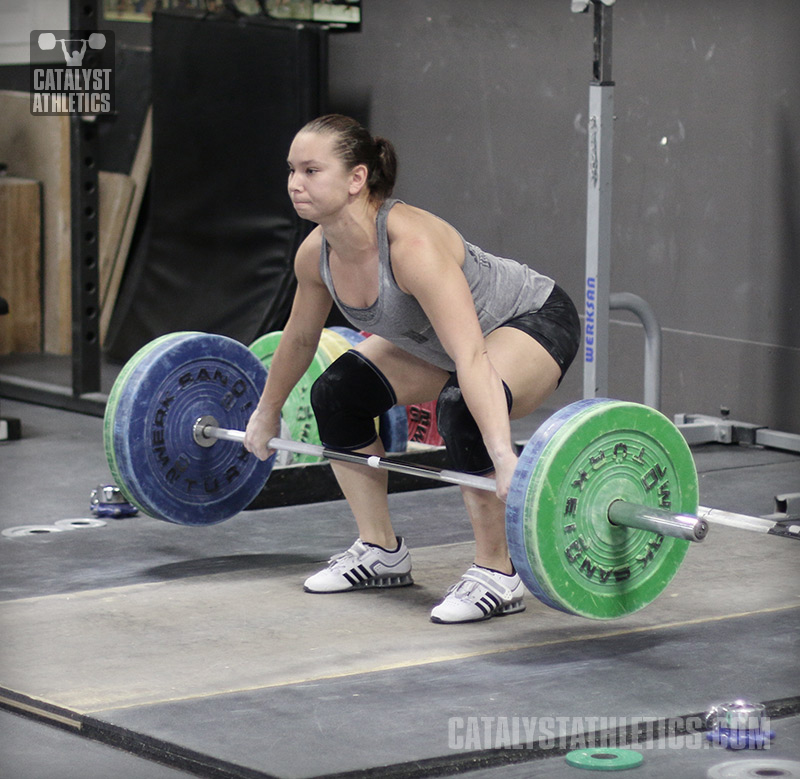 See more articles & videos like this in the Snatch & Clean Starting Position & First Pull collection.
With the proliferation of videos of elite weightlifters on the internet, beginners are being exposed to advanced lifting more than they were several years ago, and seeing all kinds of fancy, exciting things. Naturally, we all want to do what we see the best in the game doing, but often we don't stop to ask WHY they're doing it, HOW they're doing it, WHAT the process was for reaching it, and WHEN they started doing it.

A perfect example is the dynamic start for the snatch or clean. The purpose of the dynamic start is to take advantage of the stretch reflex and/or pre-tension to make the lift of the bar from the floor easier and faster, thereby improving the rest of the lift. This is very common among advanced lifters, who are lifting weights that are surprisingly tough to break from the floor and move quickly in the first pull.

The problem with beginners emulating these more advanced lifters' starts is that beginners have not yet established a reasonable level of technical proficiency and consistency. That is, their lifts are still a little different each time, and still not what they should be on even the best attempts. Introducing a dynamic start in this situation just adds another element of complexity and more potential for inconsistency.

At this stage, any unnecessary variables simple make achieving consistency in training more difficult, and from a coaching perspective, make recognizing and diagnosing technical problems in a lifter more difficult. It’s similar to a lifter using a slightly different grip each time he snatches—every lift will be a little different, even if he’s essentially doing the same thing each time. In the same way, a dynamic start with a lifter who isn’t yet technically proficient means that the lifter’s position and balance at the moment the bar separates will likely be slightly different with each lift, meaning that the rest of the lift that follows is going to happen differently even with the lifter attempting to perform the same actions in the same way. When a lifter has a well-established, consistent starting position and first pull, any dynamic start will naturally feed into it rather than completely changing it.
Further, at the beginning stage, no lifter is lifting weights that require help off the floor. A lifter who has been strength training in some capacity for a while who takes up weightlifting will initially have an enormous strength surplus in relation to the snatch and clean. For example, a lifter may deadlift 180kg and snatch 60kg. Does this athlete really need help lifting that 60kg off the floor? Of course not.
Another new lifter with no strength background to speak of won’t have that kind of strength surplus, but that also means he or she will be snatching and cleaning even less initially. Like the previous athlete, the weights of the snatch and clean will be limited by technique and probably mobility, not by strength or speed as they will be later on. A dynamic start may look nice, but it's unnecessary and nearly always counterproductive.
For new lifters, the primary goal is building a solid foundation that will get them progressing in a way that not only allows relatively quick improvements early on, but sustained improvements in the long term. This can’t be done if lift technique is not solidified as early on as possible, and that can’t be done as easily when every snatch and clean a lifter does is doomed to be inconsistent because of an unnecessarily complex start that launches them into the lift in a different way each time.
So when should a lifter start experimenting with a dynamic start? I don’t have a formulaic answer for that—the criteria are somewhat subjective. Does the lifter miss as many snatches as he makes? Definitely not ready for a dynamic start. Does the lifter struggle to get the bar moving off the floor or is he/she snatching and cleaning a large percentage of his/her basic strength capacity? If not, why even consider a dynamic start?
Now, if the lifter is pretty consistent in training, only missing occasionally, and only then because the weights are genuinely challenging, rather than because he/she doesn’t have adequate control, it may be a good idea to experiment with a dynamic start. Some lifters hate dynamic starts and stick with a static start for their entire careers—it’s definitely not a necessity for every lifter even at more advanced levels.
If you do decide to try out a dynamic start, give it some time before you make a decision—at least a few weeks. It’s not something that will necessarily make your lifts feel better immediately. It will probably make the weights feel a little lighter off the floor right away, but you’re likely going to find yourself struggling with technical consistency for a while again (kind of like back when you were too new to use a dynamic start—but not that badly). Try different variations as well. Eventually you’ll either arrive at a dynamic start that you feel comfortable with and that actually helps your lifting, or you’ll decide to abandon the dynamic start altogether. In either case, at least you’ll be confident that you evaluated it properly and have made a smart choice.
See more articles & videos like this in the Snatch & Clean Starting Position & First Pull collection.