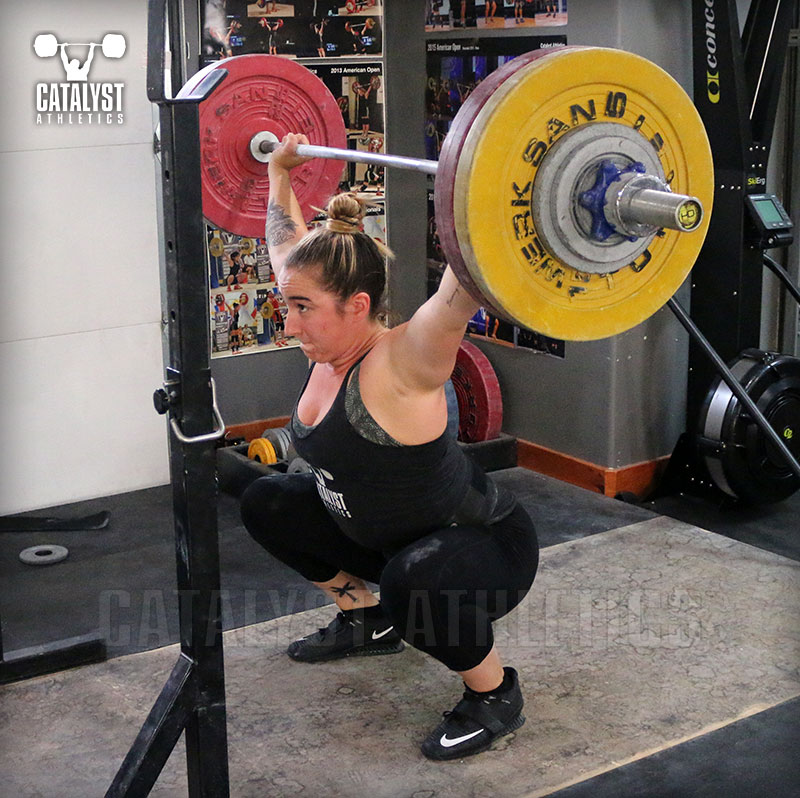 See more articles & videos like this in the Weightlifting Program Design collection.
Erika Asks: Hi Coach, I’ve just started Olympic Lifting a couple months ago and I'm having issues with my catch position in the clean. I can easily power clean 115#s but I'm unable to do a full clean with more than 110#s and I can't figure out what the issue is since I can also front squat up to 125#s. I'm also having the opposite problem with my OHS. I can't OHS more than 65#s but my PR snatch is 95#s. Since OHS are part of a program I'm wanting to start I feel like I can't make proper gains without being able to train with a heavier OHS weight. Any ideas on why I'm so much weaker with the OHS?

We can reverse-engineer this and see what you should be front squatting to get your lifts in proper range of each other. If we expect to clean 85-90% of the front squat and are looking for a 128-144lb clean, that would mean you need to be front squatting 142-169lbs. It should be apparent now that the problem is not your clean at all, but a lack of squat strength.

This is very common in CrossFitters and other non-weightlifter athletes because of the lack of regular squatting in their training and excess of power variants. Quite simply, you need to start squatting more frequently and with more emphasis. You can keep doing power cleans, but I would do at least as many cleans in any given period of time, and I would also squat after every power clean (i.e. after receiving the power clean and stopping in that position, sit into a squat). The only way you’re going to fix the problem is to squat.

Regarding the snatch and overhead squat conundrum, this is a bit more complicated. First, you don’t necessarily need to overhead squat more than you snatch—unless you overhead squat pretty regularly for a decent period of time, it’s common actually to not be able to, especially for women who typically have less relative upper body strength. So this is not a deal breaker.

The overhead squat requires push pressing or jerking the bar overhead first, which has its own stability demands, and then requires at minimum double the time and distance to keep the bar secured overhead relative to the snatch, and often more than double in terms of time because of the typically slow descent. Without a strong and stable overhead position, which requires the proper upper body mobility, and a strong and controlled squat and bottom position, which requires proper lower body mobility and stability, the overhead squat will be a disaster.

Based on your clean and power clean problem, I have to assume there is a dearth of squatting in your training, suggesting your squat movement and bottom position are not as dialed in as they need to be. So step one is increase the frequency of squatting in general (back, front and overhead).

Now, I don’t know if this low overhead squat is actually holding back your snatch or not. It may not even be a problem. But I’ll take your word for it in order to answer the question.

I would approach it pretty simply like this: spend 2-3 weeks in each of the following phases, working to add weight each week. Hold the bottom position of the last overhead squat in each set for 3 seconds before recovering. Use 4-6 sets.

In addition, any time you snatch, hold it in the bottom for 2-3 seconds, and add an overhead squat at the end of each set. Warm-up at least 3 days/week with overhead squats with an empty bar or up to maybe 50% of your best overhead squat for a few triples.

See more articles & videos like this in the Weightlifting Program Design collection.