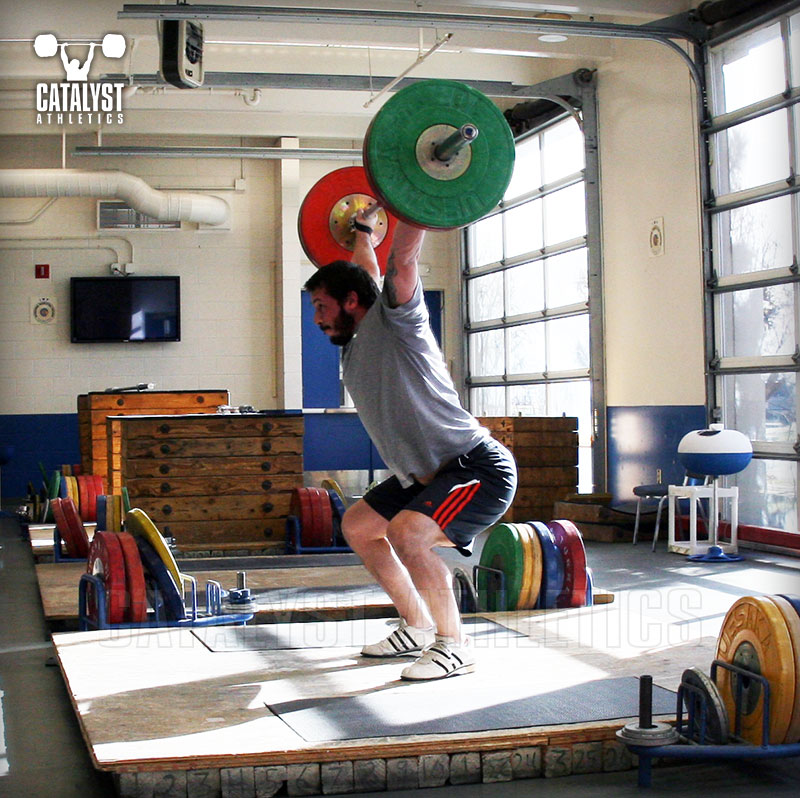 The topic of power snatches and power cleans has always generated what I’ve found to be fascinating questions and ideas… and by fascinating, I mean bewildering. For example, people wondering aloud why competitive lifters would ever squat completely in the lifts since it’s so much easier just to power it; or simply the never-ending argument about the value of the power variations.

Inside the weightlifting community, one thing has always been understood—the power variations of the snatch and clean will allow the athlete to lift less weight than the full variations. In recent years, with the huge and sudden influx of athletes into the sport through non-traditional avenues (e.g. CrossFit®), this basic premise is not always so clearly understood, and more importantly, it’s increasingly often violated.

In other words, more and more athletes are running into the problem of being able to power snatch or power clean more weight than they can snatch or clean, and most are recognizing this is a problem needing to be corrected to improve their performance. Let’s figure out some straightforward ways to fix this.

There are a number of possible reasons for this to happen, and they can be different for the snatch and clean with a given athlete. Figuring out the source of the problem will allow you to determine the most effective corrections, although a shotgun approach using the following recommendations can certainly work if you’re not sure.

The most general and basic reason this occurs is simply that the athlete performs the power variations far more than the full variations. Thankfully, the solution is pretty simple—quit powering so much and squat. Stop doing power snatches and power cleans completely. If you need some kind of variation that limits intensity and has similar characteristics like requiring aggressive extension, quick change of direction, and a forceful turnover, use high-hang or high block variations of the full lifts where you would otherwise use powers. Any lift you inadvertently power, squat it—ideally before you even stand up, just sit into a full squat, but if you do stand before you catch yourself, do an overhead or front squat once you figure it out. Consider it punitive as well as remedial.

Fear or discomfort in a deep receiving position is probably the next most common cause. I won’t argue that receiving a snatch or clean in a power position is a lot less scary and more comfortable than in a deep squat, but no one cares about your feelings, only how much you lift. First and foremost, make sure you’re squatting enough—both in terms of frequency and weight. If your best front squat is only a few kilos over your best power clean, guess what—you’re not going to be cleaning more than you power clean anytime soon. If you can’t sit into a deep and stable overhead squat with as much as you power snatch, same issue.

For the clean, you not only need a strong front squat in terms of weight, but also in terms of posture and stability. You need a good bottom position with an upright trunk, and the trunk stability to withstand a good pounding. For the snatch, strength will arguably take a back seat to stability. You can be “strong” overhead, but if you can’t hold the bar still or get it in the right place, it won’t matter much. Start with developing an overhead squat that exceeds your best snatch and power snatch and that you can hold in the bottom for 3 seconds without dying. Once that’s established, start working more on stability with snatch balances—build your snatch balance up until you can confidently exceed your best snatch and power snatch. Create a nice comfortable margin so that you always know you can support any weight overhead that you’re trying to snatch.

Fear of pulling under is also a big issue. This can be caused by the previous problem, i.e. you won’t let yourself pull under because being under the bar means certain death, but it can also be fear of the movement under the bar itself. If you’re weak in the pull, or even just slow despite being fairly strong, often your brain will shut the operation down for fear of committing to a process it’s unsure it can complete in order to avoid the danger of an incomplete third pull. If the pull is weak, strengthen it—more pulling variations, especially pulls and deadlifts off of a riser. If the pull under is the problem, use the tall snatch/clean, snatch/clean from power position, and/or high-hang or high block snatch/clean to help develop the physical attributes of the third pull, but also to accumulate more exposure to the movement in order to improve confidence—make it routine.

Limited mobility will play into this issue as well. Obviously receiving in a power position requires a lot less mobility than a full squat, so for some of you, this may be something that requires a lot more time to correct. However, you can use the same basic approach—the more time you spend in the squat receiving positions, the more mobile you’ll become (be smart and avoid hurting yourself, please). Stretch your face off every day instead of spending that time searching for a mobility shortcut that doesn’t exist.

Greg Everett
Dave Ritchey
Thanks for your help!!
Daniel Batten
I have been following you guys for a while. I am using your Amy's Breakout program to build squat strength and OH strength/confidence. It is AWESOME for this exact issue. I was very pleasantly surprised to hit a RM for 2+1 Snatch Pull+Snatch that felt great and was just 5 kilos below my earlier Snatch 1RM in the middle of a workout and feeling pretty beat from the whole week. The snatch from power positiong has been really great for this! Keep doing what you're doing!