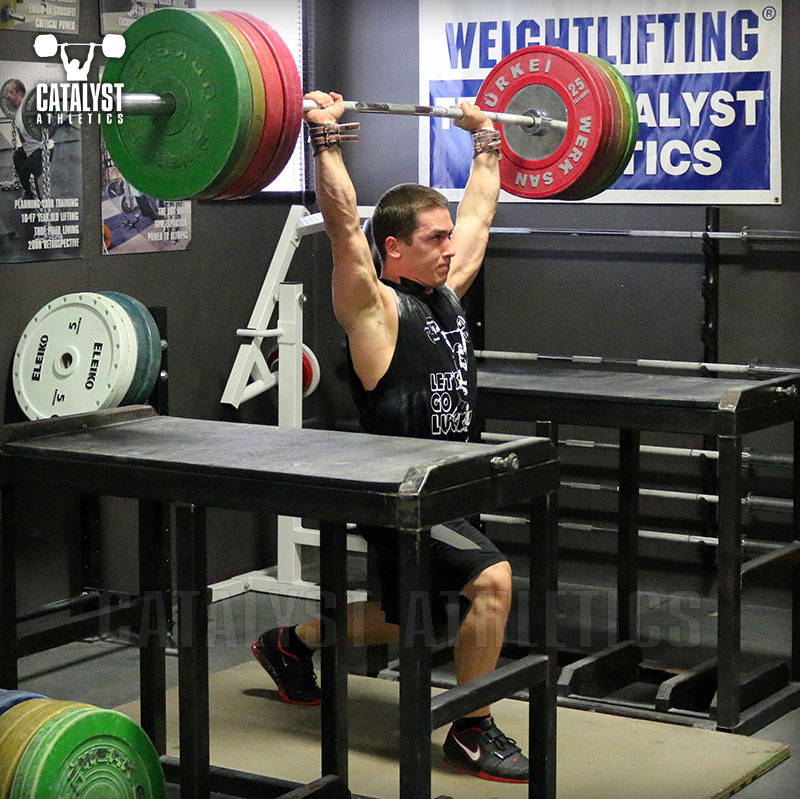 See more articles & videos like this in the Weightlifting Program Design collection.
If you’ve used any of my training programs on this website, there’s a good chance you’ve done on the minute lifts—I find it very effective and most lifters find it at least somewhat enjoyable. If you haven’t tried it before, let me explain why I think you should.

I remember Glenn Pendlay telling me once years ago how he thought he’d come up with on the minute lifts early in his coaching career and was so proud of himself, only to discover soon after that it had been around for quite a while. I found the story extra funny because I had been doing the exact same thing he was talking about (drop sets on the minute after a heavy single) without having known of anyone else doing it. In other words, it’s evidently a pretty intuitively good idea.

The primary benefit of on the minute snatching, clean & jerking, cleaning and jerking is technical consistency and circumventing mental blocks. The quick pace precludes lifters from spending excessive time between sets contemplating the difficulty and complexity of the next lift and their lack of ability and worth as athletes—in short, it keeps your head out of your ass because it doesn’t leave you enough time to get it up there.

The primary benefit of on the minute snatching, clean & jerking, cleaning and jerking is technical consistency and circumventing mental blocks.

A secondary benefit is its efficiency—training on the minute allows you to get a large number of quality sets at working weights done in a short period of time. And of course, it will get you conditioned to some extent. You may not be interested that from a health perspective, but from a competitive weightlifter perspective, it’s great to be ready to bang out several heavy snatches or clean & jerks in very little time when you find yourself at a meet suddenly needing to warm up very quickly.

There are quite a few good ways to incorporate on the minute training into your program. The earliest version of this I’m aware of was used by coach Joe Mills in his 20/20 program. This is simply 5 singles of 3 increasing weights all performed on the minute (15 total sets). If you successfully make all 15, you work up for a max of 5 more singles off the clock. Once you’re able to hit all 20 lifts without misses, you increase all of the weights for the next session. This really forces focus and consistency—it may take you several sessions to make all 20 (if you’re way off, your weights are too heavy). Start with pretty conservative weights and make the 20th lift around 90% or so to start.

A variation on this that I tend to use frequently is the same basic setup as the 20/20 program, but we increase the OTM weights each time regardless of what heavy single was hit in the previous session. In this variation, the focus is really the OTM lifts themselves rather than those that follow. Said another way, we’re working on being able to hit high intensity lifts consistently rather than using the OTM lifts as essentially a consistency-building warm-up for heavy singles. You’ll typically see a decrease in the heavy single each week with this approach.

With either of the previous variations, you can also alter the number of sets. For example, you may start with 5 sets each of 3 weights and work down to 3 sets each, either directly or with patterns like 5-4-3 sets. This is a way to preserve the structure while reducing volume as you approach a competition, for example.

You can keep it really simple as well and do a larger number of on the minute sets at a single weight, such as 10-15, and then work on increasing this weight week to week. Or you can start at a moderate weight (like 70%) and do a series of 8-12 OTM sets with a small weight increase each set (such as 2% or 2-3kg). The hardest part of that workout will be making weight changes, so make sure you have a plan.

Using a few on the minute sets is also a good warm-up on a day you plan to work to a heavy single. For example, you may do 5-6 sets on the minute at 70% or so before proceeding with the rest of your sets up to your heavy single. This will get you nice and warm, help a bit with consistency, but not take too much out of you.


Finally, you can throw in some on the minute drop sets after working to a heavy single directly. This is a way to work on that consistency and conditioning but without potentially fatiguing you prior to the heaviest single of the day. If you’re not pretty technically consistent and confident already, this isn’t the best approach—you’ll get better results doing something more like the 20/20 style program.

Snatches are obvious, but clean & jerks get more involved. I do like separating the clean and the jerk for on the minute training sometimes, especially when a lifter has a significant disparity between the two lifts, and usually only farther out from competition. Closer to competition, I prefer using the clean & jerk as a single lift to prepare. However, I will usually modify it somewhat and have the lifter take 1-minute rest rather than doing the lift actually on the minute. Clean & jerks take more out of you, and take longer to complete than snatches, so having an extra 10 seconds or so goes a long way for improving your lifts and keeping you from dying, and doesn’t change the effect since you end up with close to the same amount of rest between sets that you do with the snatch anyway.

If you’re really brave, you can even do doubles or triples on the minute. This is something I would do only at the beginning of a training cycle to accumulate some volume, get a little conditioning, and give yourself a mental break from singles—it’s not a great way to work to heavy doubles or triples.

Give the old OTM a shot, and please for the sake of all that is good and decent in the world, don’t call it EMOM in your instagram post.

Eric Meneses
Hi Greg. Could I know why that last note about EMOM? It was funny to read how serious you wrote about it.
It's really not that serious. On the minute training has been around for decades, so I've always found it somewhat obnoxious that CF started using the term EMOM instead of OTM as if it were a new protocol... and the fact that it specifies that it's every minute, when it's a pretty obvious implication when saying "on the minute", makes it even sillier to me.