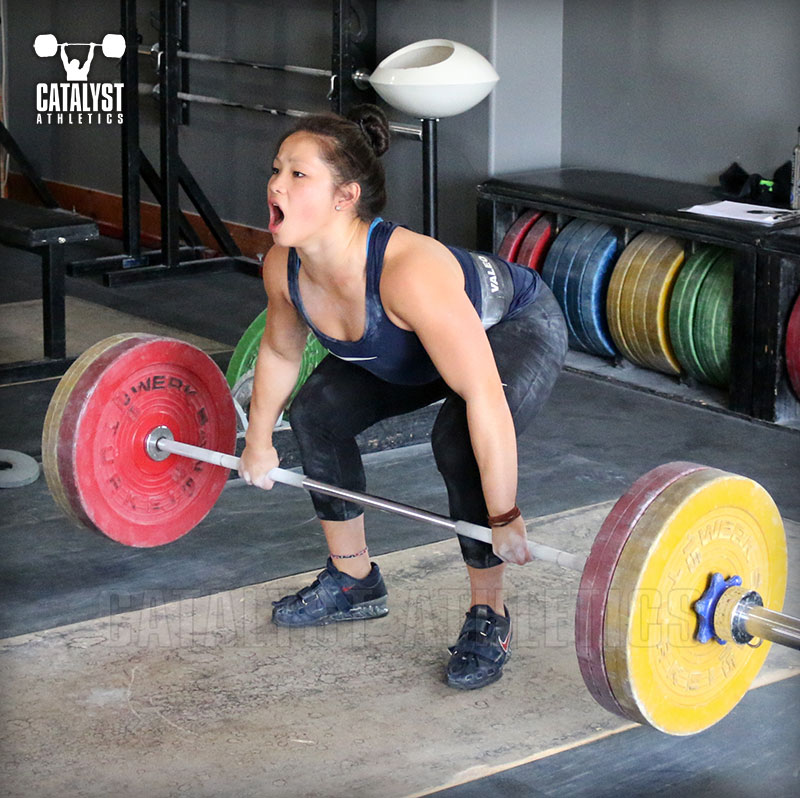 The logic itself is sound—if you can’t move a weight fast enough, you can’t snatch or clean it. But what gets quickly forgotten in these instances is that you don’t really snatch or clean the bar right off the floor. It doesn’t need to be moving fast all the way down there. The bar not moving at light speed in the first six inches off the floor doesn’t mean the lift is impossible.

Basic mechanics dictate that the beginning of the lift will feel heavier and move more slowly than the top of the pull. The pull off the floor places the knees and hips at the smallest angles they’ll be in during the pull, and the more a joint is flexed, the harder it is to extend (in the strictest sense—this is altered a bit with something like a squat because elasticity helps carry you through the lowest portion, leaving the most difficult part with the joints more open when the assistance of the speed has diminished and the task is left exclusively or nearly so to voluntary contraction).

The relative speeds of the first pull (floor to thigh) and second pull (thigh to complete extension) vary among athletes quite a lot—some are able to move the bar pretty fast in the first pull so the acceleration in the second pull isn’t as dramatic; others genuinely look like they’re attempting a max effort deadlift off the floor and then suddenly explode like a pipe bomb at the top of the pull.

The point to keep in mind when you’re lifting is that it doesn’t really matter how the bar feels early in the pull. It doesn’t matter if it feels heavy and slow—all that matters is whether or not you can put enough gas on it in the second pull, and at that point, you’ll be in a far more mechanically advantageous position to accelerate it. In other words, be patient and trust the science—don’t give up on the lift before you’ve even actually attempted it.

It’s a good idea to train in a way that improves your first pull speed for a couple basic reasons. First, the faster you can get the bar moving in the first pull, the faster you can get it moving in the second (with some caveats—see the article linked in the last sentence)—like driving a car, it’s easier to go from 60-90mph than 20-90. Second, the faster the bar moves in the first pull, the easier and lighter the weight will feel, which means the more confident you’ll be in the lift.

As a final thought, there are two things you can do without actually getting stronger or more powerful to make your first pull feel stronger and more powerful and actually move faster. First, get your trunk tighter—pressurize well and squeeze your back and abs like you’re trying to crush the seed of doubt residing inside you into a black hole. Greater trunk tension actually neurologically allows your body to produce more force.

Second, get more aggressive mentally. You need to be the mother who lifts the car off her child. If you start a lift with doubt in your mind, or with some lame hope that you’ll make it, you’re destined for failure and embarrassment. You need to attack the lift like failure is going to result in the death of everything you love in the world. This takes practice, but so does everything worth doing, so I don’t want to hear that but I’m just not aggressive by nature nonsense. You’re not as good at lifting as you want to be either, but you don’t just accept your current ability as permanent, so why would you surrender to your naturally low level of aggression like some sad fatalist? Work on it with everything else you do in and out of the gym, and go murder some bars like they have it coming.

Justin
Love this: "go murder some bars like they have it coming."
Sebastian Tokle
Thank you for this article. It's greatly appreciated :)
Osman Manzanares Head Coach at Nashville Weightlif
Greg first it all i want to congratulate you for the amazing podcast along with Ursula, I like the way you address the points most of the time is like hearing myself with the advice i give the athletes. I alway say every athlete is unique and also every athlete have a unique bio-mechanic. With regard to how the weight feel in the first pull or second pull again is all about that bio-mechanic that the athlete has, however one of my cues for this is you got to be fast in the first pull, and faster in the second to be able to make that heavy snatch or clean and jerk. congratulation for your achievements and for that great information you provide to all the weightlifting community.