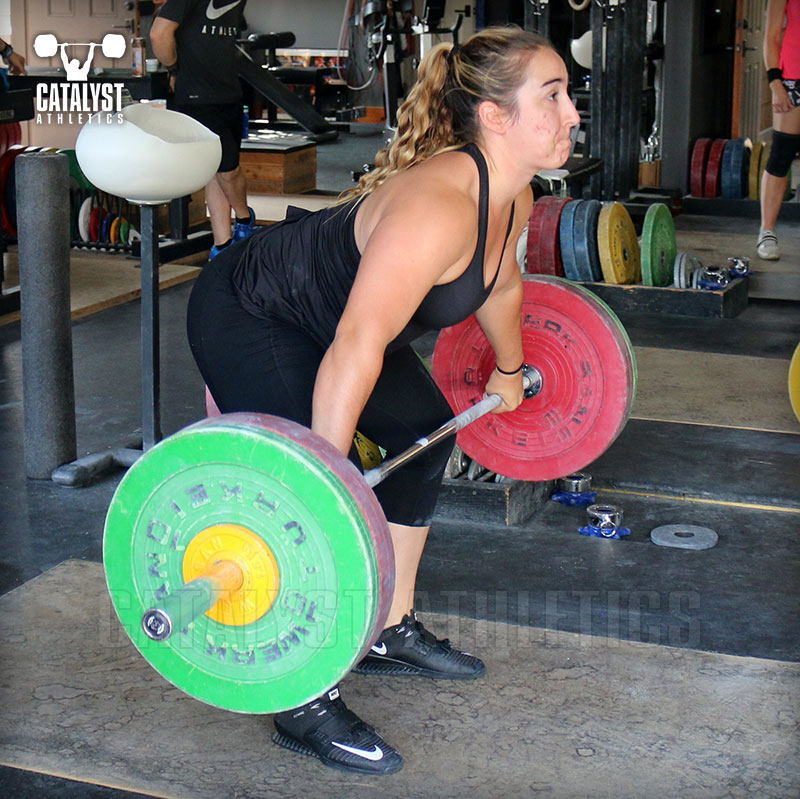 See more articles & videos like this in the Snatch & Clean Starting Position & First Pull collection.
I genuinely can’t believe I haven’t written an article on this subject yet. It seems obvious now, as this question comes up pretty frequently, and it’s something I address in detail in my seminars. In any case, let’s get to the bottom of this because, unsurprisingly, there are varying opinions—or at least varying interpretations of things people say about it.

First, let’s quickly establish a couple things. The first pull is the movement of the bar from the floor to the point at which the final upward explosion is initiated—between the top of the knee and mid-thigh or so. The second pull is that final upward explosion—from that bar at the thigh position to the body’s final extended position.

All lifters will move faster in the second pull than in the first (although how much of a difference there is varies). This is simply the result of the changing mechanics as the body extends—in the first pull, the knee and hip joints are bent to very small angles and consequently more difficult to extend; as you get the bar higher up the legs, the knees and hips are at larger angles and easier to extend. Even with the same effort to produce force, it’s easier accelerate the weight in the higher positions than in the lower.

Even with the same effort to produce force, it’s easier accelerate the weight in the higher positions than in the lower.

In simple terms, the faster you’re going, the easier it is to accelerate to your maximal speed. Consider accelerating in the second pull with a normally paced first pull compared to trying to reach that same maximal speed while doing your first pull with a 5-second count to above the knee. Even if you haven’t tried it, you can probably imagine the former is easier.

That said, there is a caveat—if you go too fast in the first pull, you actually won’t be able to apply maximal force to the bar to accelerate it in the second pull. The bar is basically moving too fast for you to keep up with it to apply full force. However… it’s very unlikely you’re going to reach that threshold with heavy weights. If you’re cleaning 150% of bodyweight, for example, I can pretty confidently say that this isn’t going to happen no matter how hard you pull on that bar—when I say pull as fast as possible in the first pull, bear in mind the bar won't actually be moving very fast due to the mechanics of that position. I’ll come back to this later.

Moving the bar fast in the first pull (as fast as possible in this phase) is different from rushing the break from the floor. The initial separation of the bar from the floor can be considered its own action independent of the remainder of the first pull. This break can be quick, but it has to be controlled. In other words, if the bar is yanked off the floor in such a way that you compromise your position and/or balance, it’s “too fast”. Further, often ripping the bar off the floor like this will actually force you to slow down a moment later to catch up to it because you’ve actually launched the bar up a bit past the tension of the body pulling it—you have to allow it to slow down to get reconnected. Never should the bar actually slow down once it starts moving.*

If you’re new to lifting and handling weights considerably below your strength capacity, or when you’re more advanced and warming up with light weights, you will need to control the speed of the first pull to ensure you’re moving properly. If you can snatch 140kg and you pull 50kg with maximal force, it’s going to fly past your knees and you’ll never be able to actually produce the correct motion of the first and second pull. Feel out a speed that allows you to hit the positions you need, maintain your balance, and create noticeable explosive acceleration in the second pull.

If you want all that distilled to some simple rules, here you go:
*The bar does actually slow down slightly during the scoop in the second pull, but this is typically not visibly noticeable, and is unrelated to the effort to produce force to lift it.