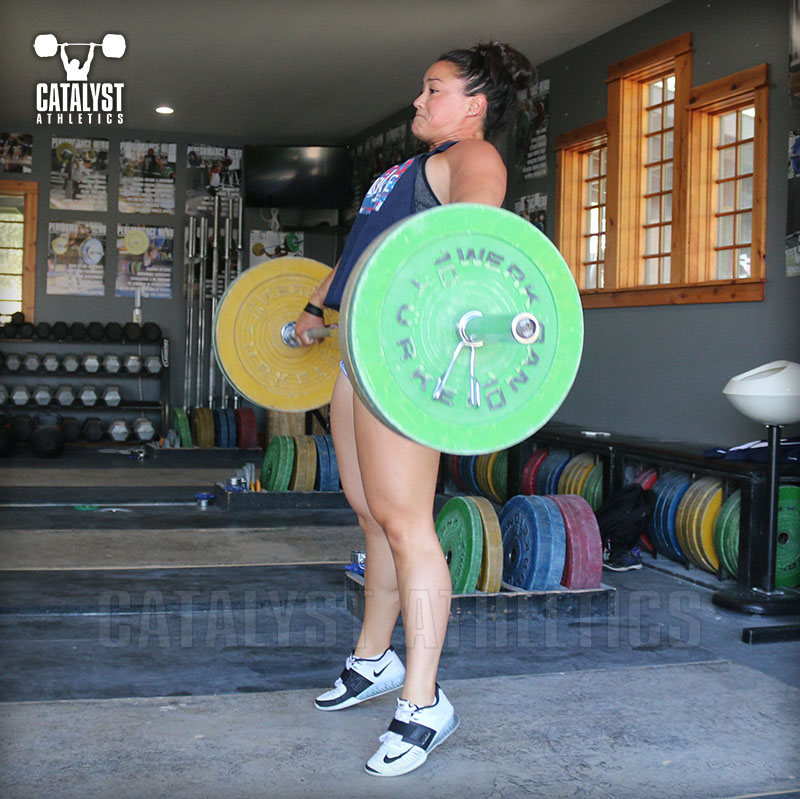 See more articles & videos like this in the Pulling Position & Balance collection.
Ashley Asks: I have been weightlifting for 5 years and cannot seem to break the habit of rocking back on my heels between the first and second pull, especially on the clean. I see it every lift I record: my toes come completely off the ground. This subsequently results in me having to bring my heels off the floor in order to have contact with the bar.... instead of the desired chain of reaction: heels come off the floor BECAUSE of the bar contact. (I hope this makes sense...)

I’ve tried fixing by adjusting my back angle and also by scooting the bar slightly closer to my shins on setup, but then I hit my knees on every pull. It’s frustrating because I know I could probably have some higher numbers if I could just maintain contact with the floor longer.
Do you have any drills in mind in which I can practice not rocking back on my heels? Or to help me keep my whole foot planted as long as possible? I’m getting old and desperate.


Greg Says: First, I want to take a moment on the heels rising prior to contact issue. While just about everyone agrees that it’s optimal to remain flat-footed basically as long as possible in the pull, there are different reasons for the heels rising earlier and as a consequence, different corrections, and at least as importantly, different levels of necessity for correction (down to and including none at all). The first thing to understand here is that being on the balls of the foot doesn’t necessarily mean your balance has shifted forward to that point. If you’re moving at a certain threshold of speed, that pressure and the line of gravity do not have to be aligned like they do if you’re in a static position. (See this video for a good explanation of this.) Also, the heels do not come off the floor because of bar contact—they rise because of the natural dorsiflexion of the ankles during a drive of the legs against the ground, the same way the heels naturally rise during a jump.

In short, if you’re properly balanced and otherwise moving with correct timing and positions. I’m unconcerned with the heels rising slightly at a point earlier than the textbook dictates. If, on the other hand, your heels are rising as part of a forward motion of the entire body, or an excessive forward reach of the hips, to chase a bar that is too far in front of you or because you believe the finish of the pull should involve that kind of horizontally-oriented hip extension (or you know it’s wrong but haven’t been able to correct it), then it’s something that needs to be corrected—but by correcting the cause, not the heel-rising directly.

So, we have two basic tasks: Put you in the correct position to pull (and keep you there), and correct the motion leading to the problem. If this problem is happening toward the end of the first pull or early in the second, it’s unlikely your original starting position was the source of the problem—there’s so much time and space between the two points for things to go wrong, or for you to correct something that started out wrong. See this article about the starting position and make only very minor adjustments if truly needed (unusual).

Rocking back onto the heels usually comes from moving the entire body backward as you pull because you think you need to get farther toward the heels than you do, or because you’re overcompensating for being too far forward earlier in the pull, or from excessive knee extension early in the pull, i.e. “pushing the knees back” to stay over the bar or try to bring the bar back toward the body—again, this is excessive implementation of what should be a collection of very minor motions.

The first thing you need to do to fix this is slow down! Can you set the proper starting position and then pull the bar to mid-thigh while maintaining approximately balanced pressure across the foot and keeping the shoulders directly above or slightly ahead of the bar? If not, practice slowly. This allows you to really feel the positions and pressure and continually adjust along the way as needed, and repetition of this increasingly correct motion is what will ingrain it neurologically (as well as develop the strength to keep the body in the correct postures). You can simply do halting deadlifts with a slow tempo (up AND down), or you can add pauses along the way (recommended) like immediately after separation, at the knee, and at mid-thigh… and don’t rush between them! Make sure as well that you’re actively keep the bar as close to your legs the entire time without dragging.

Once you can pull correctly, e.g. you can do a snatch pull without exhibiting the problem we’re talking about, you need to move on to the next stage (or to the actual problem if this was never it).

Very likely it’s coming from a misunderstanding of the second pull motion, or simply bad habits borne of bad instruction or various possible pre-existing habits from other activities—the intent to drive the hips into extension toward the bar rather than extend the body upward and guide the bar along with it. It could also be a reaction to the bar not being kept close and pulling you forward so you’re force to chase it with the hips.

In any case, you need to learn and practice a better second pull motion. Start with snatches and cleans from power position—feet flat, knees bent, trunk vertical or very close to it. Hold this starting position a second or two before lifting—it’s not a quick bounce down and up. Drive vertically and forcefully with the legs to initiate the lift, focusing on feeling pressure through the whole foot as you start. Actively guide the bar close to the body and up along it. Let the hips extend naturally—don’t worry about trying to be explosive with the hips. If you ensure you remain balanced, they will open to the necessary degree and in the right way, i.e. not pushing forward through the bar excessively.

Eventually precede this lift in a complex with a pull, moving as slowly as needed to ensure correct position and motion. Once you can do this well consistently, return to normal snatches and cleans.

See more articles & videos like this in the Pulling Position & Balance collection.