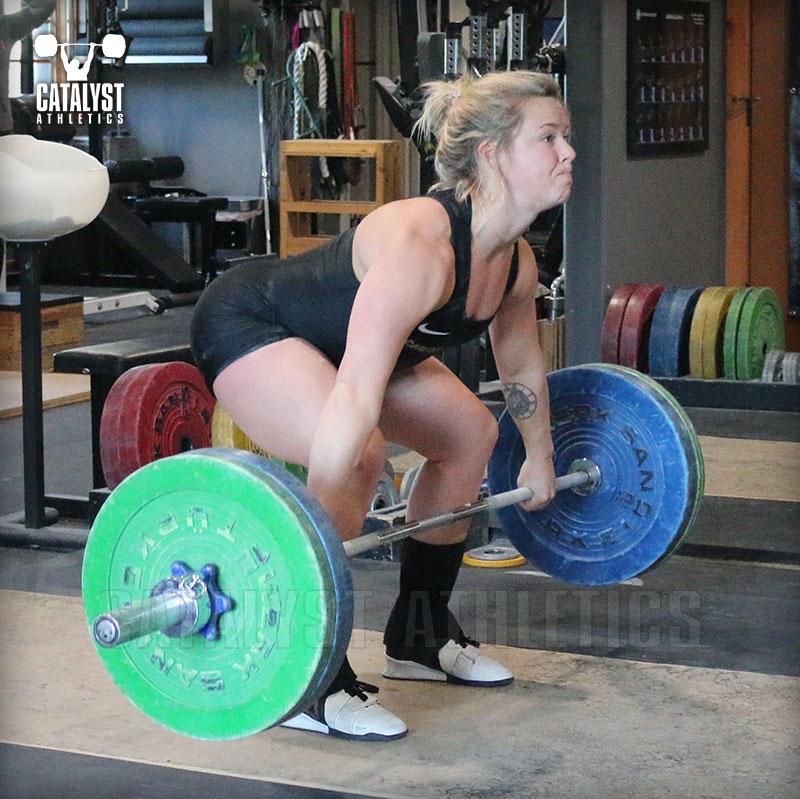 See more articles & videos like this in the Pulling Position & Balance collection.
We want to maintain a fairly constant back angle through the first pull, although we’ll nearly always see a slight change. It’s important to understand what actually constitutes the starting position because this is a common source of confusion and argument when suggestion the back angle shouldn’t change considerably—the starting position is the posture you’re in the moment the bar begins to separate from the floor. It’s not whatever low-hipped, shoulders-behind-the-bar preparatory position or any given point of a dynamic start you feel like picking.

The goal is to prevent an excessive and unwanted shift in position. This is a quick shift very quickly after the bar leaves the floor. You’ll recognize it as a sudden rising of the hips while the bar travels relatively little. The hips shooting up dramatically more than the shoulders and bar rise creates a two primary potential problems: It tends to shift balance too far forward, and it tends to force an early second pull, which reduces bar speed and elevation and also disrupts balance.

There are two basic reasons for this to happen, not including an improper starting position or a lifter intentionally moving this way (e.g. a lifter who’s been taught to push the knees way back early in the pull and get the shoulders really far in front of the bar).

The first is a rush to break the bar off the floor. Yanking the bar will nearly always cause the hips to shoot up before the shoulders because this typically means there is slack in the system and the hips will take it up before the bar actually starts moving under the full force of the pull.

Bar separation does not by any means need to be slow (just watch my favorite lifter, Zlaten Vanev, who breaks the bar like he’s trying to escape the earth’s gravity)—you just have to control your position regardless of your speed. Ensure tension throughout the body before the start, and imagine pushing your legs through the floor to drive your chest up away from it, just as you would in a squat.

Keep in mind that it’s easy to mistake the hips rising as a fast pull—it’s not. Pull speed is measured by barbell motion. If the bar is moving half the distance the hips are in a given period of time, that means it’s moving twice as slow. No one cares how fast your hips move up if the bar isn’t staying with them.

The second main cause is weakness of the legs relative to the hips. The knees are at a very small angle in the starting position that’s difficult for the quads to open. The body will always shift into the strongest position for a given task—in this case, the knees will open without actually moving the load commensurately and shift more of the initial lifting to the hips. This is the same issue you see in a squat when you tip forward—your body isn’t able to straighten the knees with the full load, so it keeps the load in the same or similar position while it extends the knees to a less mechanically disadvantaged angle—once there, you start lifting the bar again with the legs and hips.

The idea of pushing with the legs like a squat like with a fast break off the floor will still be helpful, but in this case, you need to improve position-specific strength to see real improvement—in this case, knowing how to do it isn’t enough because your body simply isn’t capable of lifting the heaviest weights in the position you want.

First ensure all pulls and deadlifts are performed with the correct positions—reduce weights if needed or you’re simply going to continue reinforcing the incorrect positions. Everyone hates doing this, but stop and think about it for a moment. If you can’t lift a weight in a position that allows a successful snatch or clean, why are you training it? Strength is very specific to positions—if you continue strengthening a position you can’t snatch or clean from, your body is going to continue putting itself in that position, and instead of snatches and cleans, you’re going to have a lot of ugly pulls that never get completed as a competition lift.

Use pulls from a riser to improve starting strength at even smaller knee angles, and use pause back squats to further develop strength from a small knee angle. Remember with all of these exercises that their effectiveness is equal to their accuracy—if you’re not in the right positions, you’re not going to get a lot of benefit.

Justin Escalante
Thank you for this article, Greg! Very helpful.