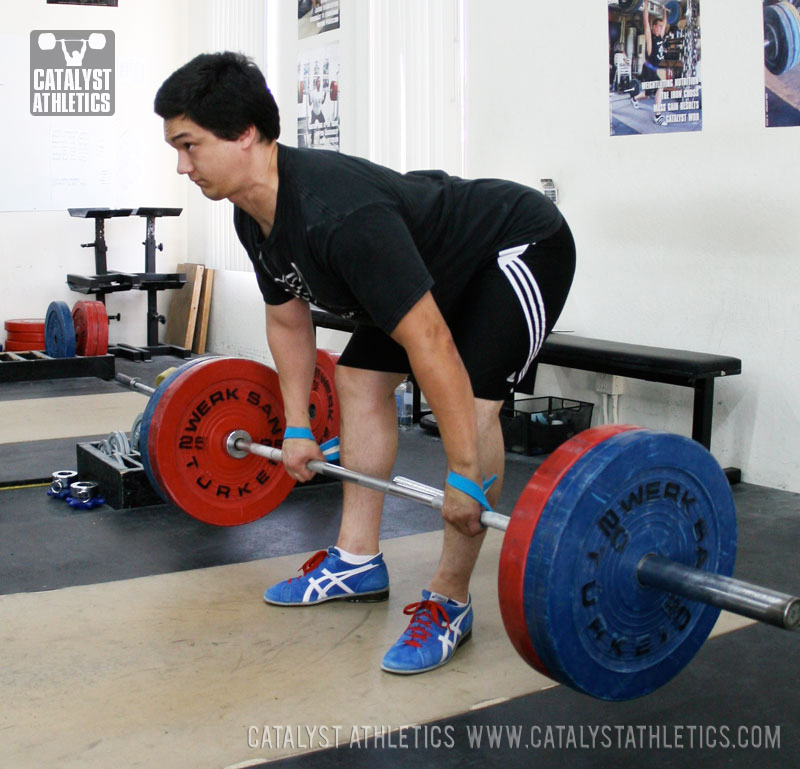 From my readings and discussions with Jim Schmitz, past USWF president and 1980, 1988, and 1992 Olympic Team Coach, it seems he named the exercise in 1990. The story is that Nicu Vlad, Olympic and World Champion from Romania, was in San Francisco training with his coach Dragomir Cioroslan at Jim Schmitz’s training center, The Sports Palace. , After he finished his clean and jerking session where he went up to 220 to 230 kg, he performed a weird deadlifting movement. Apparently he did this movement with 250 kg for triples and was seen at a later date doing it with 300 kg for a double. Someone in the crowd asked what the exercise was and they didn’t have a name for it. Jim Schmitz suggested calling it the Romanian Deadlift and the name stuck (for some people).

I guess I should mention many people are hesitant to call the exercise an RDL because they had seen or heard of athletes from various different countries performing this movement many decades before it was named in 1990. To add to the confusion, some coaches use the term RDL synonymously with straight leg deadlifts or stiff leg deadlifts. It is beyond the scope of this article to go into each variation, but these are all different movements. In this article, I will discuss the Romanian Deadlift as it was originally named and as most people call it in the strength and conditioning world. In addition to describing the exercise, I will discuss its usefulness to weightlifters (spelled with one word to denote those who train with the competitive lifts; i.e., the Snatch and Clean and Jerk).
RDL Technique

The starting position of the RDL is the top position. To start a set of RDLs, use a clean grip and pulling stance to perform the concentric portion of a conventional deadlift. Once standing with the barbell, the first rep of the RDL can be performed. Bend the knees approximately 15 degrees, retract the scapula (pull the shoulders back and lift the chest up), perform an anterior pelvic tilt (hold a nice concave position with your lower back), take a deep breath in, and brace your abs and back prior to lowering the barbell.

To lower the bar, focus on pushing your hips back, maintain the same 15 degrees of knee flexion, maintain the fixed naturally arched spinal alignment you focused on prior to lowering the bar, and keep the bar as close to the body as possible.
Lower the bar as low as you can without touching the floor and without your low back rounding or knees bending more than they were at the top position. If the hips are pushed back and the bar is kept close to the body, then the shoulders should be anterior to the barbell.

When ascending, the same spinal alignment must be maintained—the movement occurs from the hips, and the knees do not extend, but rather stay flexed in the same position. Exhale as the lift is completed. The arms should remain straight the entire time. The movement should be steady and controlled rather than explosive.

Common mistakes with the RDL are flexing the knees too much on the descent, allowing the low back to round (posterior pelvic tilt), allowing the shoulders to round forward (protraction of the scapula), fully extending the knees at the top position, not flexing the knees enough during the entire movement, and excessively extending the back at the top (leaning back too much). Despite being a fairly simple movement, many lifters struggle with this exercise initially. Tightness of the hamstrings tends to cause excessive knee flexion and lumbar flexion (rounding the low back) during the descent.

Transferability of the RDL to Weightlifting

Transferability in this case refers to how well the RDL improves the performance of the competitive lifts. For a weightlifter, the most specific training is performing the competitive lifts at near max loads for a very few number of repetitions. This cannot be done 100% of the time because it can lead to overtraining in the form of neural and muscular fatigue, injury, and loss of motivation. Therefore the lifter must balance training with lifts that are similar to the competitive lifts as well as train at different intensity levels throughout the training cycles.

So how well does the RDL improve performance of Snatches and Clean and Jerks? To help us understand this let’s look at a few sequence shots of a Clean.

The lifter in these photos is Rob Earwicker, who has competed in weightlifting at the international level. Sequence shots of both the clean and RDL were performed by Rob at a sub-max 110 kg load on the same day and were taken from video footage of entire lifts performed at normal speed.

A video comparing these two lifts with the barbell trajectories can be seen here:

To understand the meaning of these data, it is important to realize that forward and backward movement of the barbell directly relate to forward and backward weight distribution on the feet due to mechanical principles of balance and stability. This statement is even more accurate with a more experienced lifter lifting a greater load relative to bodyweight.

Despite a seemingly similar movement pattern between the clean and RDL, many differences become apparent when looking at the barbell trajectories.

When the bar is at the lowest position:

RDL: Weight back on the heels, torso close to parallel with ground, hips high

When the bar is at the knees:

When the bar is at mid-thigh:

Clean: Weight has shifted toward the front of the feet, torso is fairly upright, barbell moving forward and is accelerating rapidly (most powerful part of the lift)

These data show us that the movements are not as similar as they seem at first glance. It is my belief that the RDL can teach the skill of keeping the shoulders over the bar during the first pull. It also develops the strength required to do this movement. Hamstring strength is crucial for a rapid double knee bend phase and explosive triple extension during the Olympic lifts. The RDL can help with this, so there will be some transferability. The question is if the strength of the posterior kinetic chain cannot be improved while performing an even more specific movement. I believe clean and snatch pulls may be a better choice in some cases. A coach or athlete must consider the development level of the lifter, the training phase, and the specific goal for each exercise. In many cases the RDL may be appropriate, but my overall point with transferability is that the RDL is not as specific to the Olympic lifts as many may believe. I would go as far as to argue that doing too many RDLs may reduce performance on the competitive lifts in some athletes.

What is the RDL Good for Anyway?
Flexibility

Once the exercise is understood and the nervous system can coordinate the movement, the RDL can be used to develop flexibility. The bottom position should be the point just prior to rounding of the back or bending of the knees too much. In extremely tight individuals, this may be at the point where the bar is just around the knees.

The RDL is great for developing strength in the posterior kinetic chain. The hip extensors, i.e., hamstrings and glutes, must produce force isotonically (activation causes movement), while the muscles of the back are primarily used to isometrically (activation without movement) stabilize the spine.

It is worth noting that the type of strength the RDL optimizes is strength-speed, i.e., on the force-velocity curve, the improvement is high for force, but low for velocity. This is in contrast to speed-strength training that would be low force, but high velocity, e.g., throwing a javelin.

The RDL is a very functional exercise for life. In other words, there are many movements in life where one might lean forward at the hips and lift an object with the feet planted on the ground. Some examples might be lifting groceries out of the trunk of a car, leaning forward to pick a child up off the ground, or lifting a sail out of the water from the edge of a sailboat. That last example is one that I heard about from one of my clients who competes on a sailing race team. Incidentally, I have him perform RDLs in the gym to prepare his body for the task should it occur during a race.

In life and in sport, we do not always have the opportunity to drop our hips and perform a perfect conventional deadlift. In many cases the movement looks more like an RDL, and unfortunately often times the movements are more dangerous for the spine. Performing perfect RDLs can reduce the likelihood of injury to the spine during these situations.

Other Comments about the RDL

It is common for weightlifters to use lifting straps while performing RDLs. This is a relatively low skill exercise that is typically done for reps, so in an effort to save grip strength for other training sessions, athletes will use lifting straps. I would not recommend the use of straps for beginning lifters or those training for overall improvements in fitness.

When first performing this exercise, remember to start light and develop technique. Eventually an athlete might use the same sort of weight as used for clean pulls. Very highly trained individuals can go much heavier than this, e.g., Nicu Vlad doing 300kg for 2 reps.

Most people do not have the flexibility to warrant this, but a very advanced variation of the RDL can be done standing on blocks and lowering the barbell farther.

The RDL is an excellent exercise if one wants a pure strengthening exercise for the posterior kinetic chain. If an Olympic lifter is using this exercise to improve technique, they should be aware of some potential limitations.

Tyciol
I oppose calling this move an RDL. Screw what stuck. Nicu Vlad was the one doing it, so we should name it after him, not his country.

"Vladlift" sounds cooler and better. This movement isn't even a deadlift because you start it at the top, not the bottom. This lift is undead. It is a vladlift.


Gabe Rinaldi earned a Bachelor’s degree in Kinesiology with a minor in Sports Nutrition and a Master’s degree in Kinesiology with a focus on Biomechanics and Sport Performance from San Jose State University. He is an NSCA Certified Strength and Conditioning Specialist, a USA Weightlifting Club Coach, and a CrossFit Certified Trainer. Gabe has 10 years of work experience in commercial gyms, private strength and conditioning facilities for athletes, Division I collegiate strength and conditioning, and private personal training facilities.