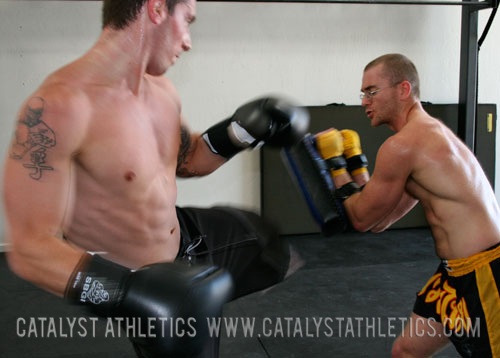 The following is excerpted from In Your Corner: Marketing, Media and PR for MMA Fighters and Managers by Yael Grauer and Brant DeLorenzo.

There's a few things you should know about interviewers before they show up, or before they call. If they are writing for a website, they are usually either not getting paid at all or not getting paid very much. Although they may be incredibly polite and professional, most MMA writers are primarily fans. Being respectful to them, or even friendly, really goes a very long way. However, keep in mind that journalists are there for the story. They want to be your friend, but they also want you to call them--and them alone--when something big happens so they can be the first to break a story. They also probably realize in the back of their mind that this is unrealistic. They want headlines. They want good quotes. Many are very concerned with their article getting a lot of hype and attention, sometimes at the risk of accuracy. They want their article to be unique and different, to stand out from all of the others. They want the one quote everyone will link to or the one photo everyone will want to steal. This is true even for the most ethical journalists who host media roundtables, meticulously check quotes and make sure they have permission to share information. Everyone wants their piece to be read and loved.

This is a somewhat challenging situation for a fighter to navigate, but here's some tips.

Show up. This is a no-brainer, but you'd be surprised how often fighters flake. They're not there, not there on time, don't pick up their phone or are having some meeting with someone in a back room somewhere. If you say you're gonna be there--be there!

Be really careful what you say. There's this special trick journalists pull. Sometimes they are not even aware of it. They ask you a question or a series of questions framed in such a way to get a specific reaction, but when they run their article they take out the whole entire question and only use the out-of-context quote, sometimes adding their own context to sell the story. The best way to avoid this is to slow down, take a deep breath, and really think before you start talking. Make sure each sentence would sound good on its own, if someone just walked into the room and didn't hear the question. Also, if you give the interviewer a lot of good information and talk enough, they might be more likely to either run the interview Q+A style, or to use your message instead of their own in their piece.

Pleading the 5th. It is perfectly acceptable to not answer certain questions. If you don't want to go into excruciating detail about why you left a fight camp or are no longer sponsored by someone or working with someone, just don't. Contracts that haven't been finalized should never be discussed publicly. Likewise, it may not always be the smartest move to describe your fight strategy--this is really up to you. But for God's sake, if you're going to refuse to answer questions, have something else to say. Think of it this way. A writer came to cover you. They did their homework, coming up with a lot of questions that would give them good information for their article. You're not answering any of those questions. They're probably panicking a bit, because not only are they not going to be able to use their great headline, they probably don't have a headline at all. And if they took time out of their day to drive to your gym, or to call you they have obviously invested time and energy in this. So you may want to have a thing or two to say just in case the interviewer gets stuck, so that they can run their story.


How to Handle Dumb Questions

Dumb questions are notorious in women's MMA, where interviewers often want to know an athlete's favorite color and snack and what she likes to do on weekends. It happens to men, too, and isn't always dumb questions... sometimes the focus is just different than what you think it should be. The writer keeps bringing up an injury you've healed from, or a battle between gyms that doesn't really exist. Again, refusing to answer the question or setting the record straight content-wise is always a good idea as long as you follow up with relevant information. Going into the interview with some idea of the message you want to get across is great. Also, be specific. Everyone says "I want to thank my team, everyone's great, and my sponsors," but WHY is your team great? Does your boxing coach run a program for urban kids to get them off the street? Are you affiliated with some jiu-jitsu guru who just won Pan Ams? What about your gym or team is exciting and unique that you can talk about? Coming up with some great things to talk about is not only good for awkward silence or questions you'd rather not focus on, but also for the inevitable "is there anything you want to add" question you'll likely get at the end of an interview.

Picking which questions journalists are allowed to ask you is something some better known fighters often do, but it really ticks journalists off because it makes them feel like you are telling them how to do their job. Figuring out ahead of time how to field those questions is a better bet.

And here's some tips for how to act when media just happens to be around, but isn't necessarily writing about you.

Be really careful when talking trash. Remember that journalists want to quote everything if it helps them get a better headline or more readers to their web site. Keep in mind that they're virtually indistinguishable from the staff at a fight unless you read their badge really closely. And since situations change so quickly and the MMA scene is so inbred, it's usually a good idea to at least try to stay above the fray. You can still hype up a fight without talking shit. Because, in the long run, it may make a good headline and get an article a lot of hits but it probably doesn't win you many friends. (If you DO decide to talk trash, you may want to figure out what your limits are ahead of time--and stick with them.)

Don't talk about fights that aren't official yet. (You shouldn't Tweet them either, but that's a different module). Even if a reporter really likes you, they're still going to call up your potential opponent and ask them if the fight is inked. If it's not, you lose some credibility. And if they write about it anyway or even if it ends up on a rumor site somewhere, it usually doesn't make the promoters very happy. Sometimes, you'll see fighters on Twitter who will Tweet something like "Hey guys, I didn't realize I was fighting so and so until I read it on some random blog site!" as a sarcastic jab at the writer and the site. Trust me, the writer will not be happy with you if this happens and may trash you in order to retain any credibility that they lost.

Watch out for mentioning things or telling writers things "off the record," even in casual conversation. Although some media (like us) will gladly heed the call, there really is no such thing as off the record (legally speaking, that is).

Watch the whining. I (Yael) went to weigh-ins once and heard a fighter go on and on and on about how the promotion was disorganized and how much they sucked. And I wrote about it. Now, I didn't quote him specifically, I just said he was the whiniest fighter I'd ever met and that he was complaining an awful lot about being hungry for someone who didn't make weight. You may be having a really hard time and you may be extremely frustrated, but you should still conduct yourself as a professional. There may be some valid complaints, such as an opponent not making weight, that you want to bring up. Just keep in mind that you're doing it deliberately and not by default. Again, having somebody of sound mind, someone you respect, with you to help field these decisions is always a good idea.

Lastly, not everybody has good media presence. And it sounds really cheesy to say "just be yourself." We'd hate to tell fighters to check out their local Toastmasters chapter when doing so might cut into fight training, but sometimes doing a mock interview ahead of time can really help take the pressure off, and help get you ready to be visible and enjoy the attention.

Sherif
Well, Brazilian MMA is also dead.How many big name portomions are there in Brazil these days that can hold a candle to UFC? None.Ummm .. what was the point again?

Yael Grauer is a freelance writer and the managing editor of The Performance Menu journal. Her work has appeared in a variety of trade journals and consumer magazines and she writes regularly for various websites including MMA HQ. Yael trains in Brazilian jiu jitsu and teaches writing workshops both locally (in MN and WI) and virtually. For more information, check out her website.