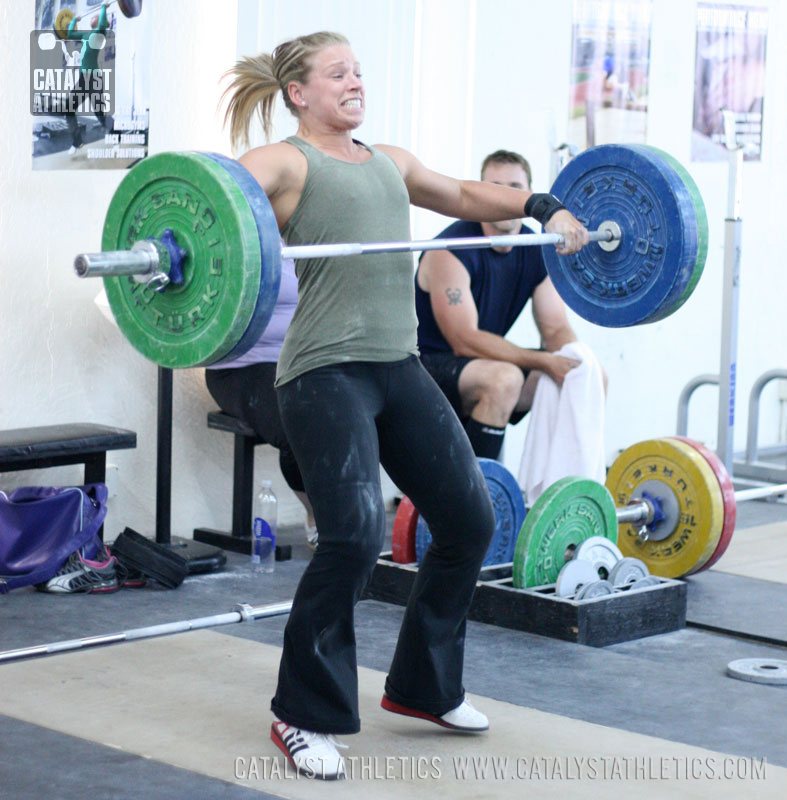 Iain Asks: What do you use as a predictor for a 1rm in the snatch and clean & jerk in training/ competition? (I know that there can be many many variables to consider)

This is an interesting question because there are no straightforward answers and a good number of opinions on how to approach it.

First let’s talk about training and then we’ll get to competition. For all the 1RM formulas out there, nothing works like actually performing a max lift. There is far too much individual variation in terms of an athlete’s ability to perform submaximal reps, his or her response to accompanying training during testing time, etc.

As an aside, it’s interesting that a lot of people use 3RM or 5RM tests rather than 1RM for the sake of “safety”. I like what Joe Kenn says about this: That’s just 2-4 more opportunities to get hurt. The lower back is probably the most common site of injury in maximal attempts of lifts like squats, deadlifts, etc.; it becomes more and more vulnerable as fatigue accumulates from multiple reps, and the rest of the large musculature tends to be far more fatigue resistant and can continue pushing past where the lower back is finished.

But back to the topic at hand. I’m of the opinion that lifters should be attempting max or near max snatches and clean & jerks relatively frequently. This may mean “heavy singles” weekly, the actual weight of which can vary significantly depending on the rest of the training week, but still give the athlete opportunity to work on maximal efforts. I don’t like going more than 8-12 weeks or so without snatching and clean & jerking to a max or close to it. I think it’s tough psychologically for lifters, but also leaves the lifter and coach much less certain about the lifter’s abilities. The newer the lifter, the more frequently it makes sense to work up to max lifts because the more frequently that lifter will be improving.

With this kind of training, it’s not difficult to predict what a lifter is capable of on a max day with various levels of fatigue if you know him or her (or yourself) well. Properly rested and peaked for a max, you may see something like 1-5% over the previous PR. Where in that range a lifter falls will depend on training experience, the nature and success of the training cycle leading to the max, and other obvious elements.

There are two basic schools of thought on competition lifts: One uses competitions to achieve PRs, and one uses competition to make lifts. In other words, the former wants to lift as heavy as possible, taking more risk; the latter wants to make 6 of 6 lifts on the platform, which may mean not even reaching the lifter’s gym PRs.

There is merit to both approaches, and each can be appropriate at different times. The benefit of making 6 of 6 lifts is that it helps lifters, especially newer ones, develop confidence and composure for competition. If a new lifter constantly makes 2-3 of 6 lifts, it sets him or her up to repeat that pattern because they expect to miss most of their lifts. However, if this approach is used, the athlete must be given regular opportunities to push maxes in the gym, or progress will never be made (or at least accurately measured).

The other approach can afford the athlete a unique opportunity for making PRs. Presumably at a competition, the lifter will be peaked and optimally prepared for big lifts, and will be maximally aroused psychologically. This can mean the ability to perform better than at any time in the gym. Of course, the same circumstances that get some lifters psyched to lift can also create debilitating nervousness in others. If a lifter experiences the latter, the competition is definitely not the time and place to push max lifts—misses here will just reinforce the fear and discomfort of competition.

As far as predicting what a lifter will be capable of in competition, in the conservative 6 for 6 scenario, all lifts will be under 100%, so this should be straightforward. He or she will open conservatively (maybe as low as 90%) and likely take smaller jumps between attempts. If a lifter can’t hit 90%, 93% and 95% when peaked for a meet, there are some serious problems to work out.

In the big lifts scenario, prediction will have to be made based on historical performance of the athlete. Meet lifters will outdo their best gym lifts, sometimes by considerable margins (I’ve seen as much as 3-5%). In these cases, it’s still a good idea to have opening attempts that are fairly conservative, i.e. that the lifter is extremely confident he or she can make. Nothing sets a lifter back like a missed opener. This would be something around 93-95% usually. Depending on how well the opener goes, and how close it is to the lifter’s best, the second attempt may try to beat the current PR or be very close to it (or match it if it’s a gym PR to make it a competition PR). The third attempt should then be a PR number assuming the first two have gone as planned.

To summarize the previous, I don’t believe there’s any reliable way to predict the 1RMs other than actually testing them, and knowing your athletes or yourself well.

AchillesLifts
You state that lifters should be regularly testing their 1RMs for Olys. What about strength lifts like squat and DL?
Greg Everett
Squats as well, although usually not as frequently - maybe 3-4x/year. There are plenty of lifters who don't text a max squat for years - really the only reason you ever need a squat max number is if you like prescribing squat weights on percentages, which not everyone does. Deadlifts, for weightlifters, pretty much never aside from maybe a once yearly test for fun, but definitely not to the detriment of other training, and not peaked for (i.e. throw it in after heavy snatches and CJs).
Pernille
"The newer the lifter, the more frequently it makes sense to work up to max lifts because the more frequently that lifter will be improving."
I don't agree with this. A new or newer lifter needs to get a lot of good lifts. When you work up to heavy weights the technique gets lost and they'll become a worse lifter than they were before. Lots and lots of technique and NO missed lifts for the new lifter.
Greg Everett
Pernille-
You're misinterpreting the quoted statement. Where does it say by taking a lifter to max you're necessarily allowing them to lift poorly? Any coach who isn't a moron understands that a lifter whose technique is still developing needs to make that a focus, but being focused on technique and lifting heavy, which is a relative term, are not mutually exclusive. A new lifter's "max" lifts are by nature limited by technique, not strength/power/speed.
Melissa
Good article. Exactly what I tell myself and all our lifters.
Sean Mcphillips
Greg, your point came across very clearly. Lifting a max weight is of course lifting a weight with good technique. This obviously goes in all lifting not just the olympic lifts.
Brad
Is there any way to assess level of difficulty of a given training day? For instance, I performed 3*3 at my working intensity of 75% in wk. 2 (this included 1 snatch variation&pull&squat or 1 clean variation&jerk&squat). After a deload week, I performed 2*3 at my working intensity of 80% in wk. 4. Even though my training volume was about 12,000 lbs lighter in Wk. 4, it was significantly harder. It seemed 80% was about my 4RM for c&j. Traditionally I would assess difficulty by using a % buffer (so If I wanted to hit squat doubles, I know that 95% is about my 2RM, so I could work at 93% with a 2% buffer). The difficulty of this training caught me by surprise, especially because 80% isn't that heavy. Advice on how I could have predicted this difficulty by working through my numbers?
I think you're overthinking this. And there isn't a way to predict difficulty precisely because individual exercise difficulty will be influenced by a lot more than the % - for example, the other training being done in that session, in the previous session, in the previous weeks, sleep, nutrition, stress, etc. Also, the tonnage of the training has zero to do with the sense of difficulty of a given intensity, only how much fatigue that training will produce.