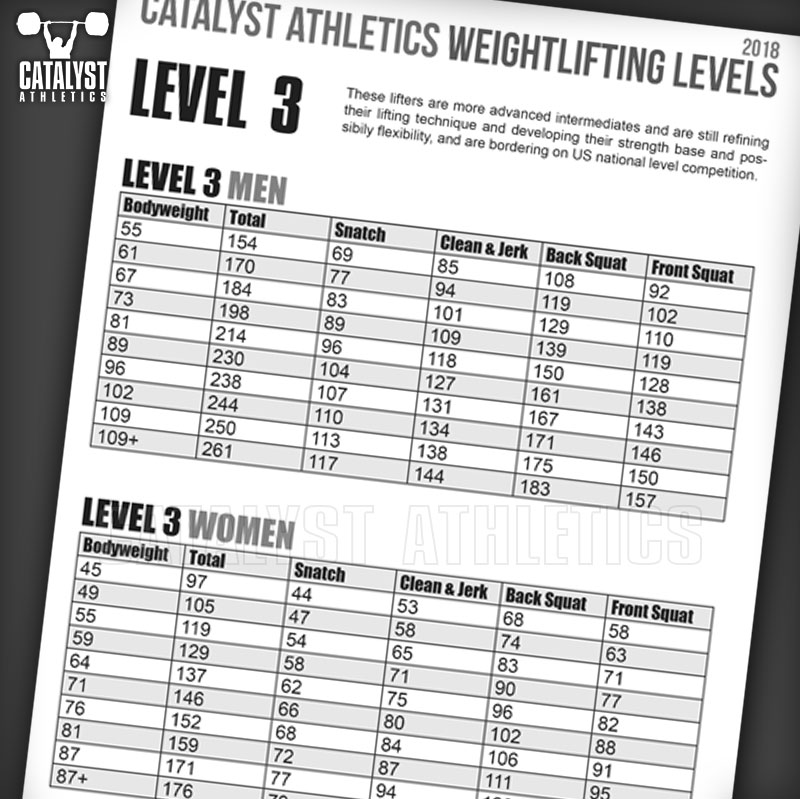 Update August 14 2018: Levels 3-5 have been adjusted to reflect more recent US competition performance and qualifying totals. This primarily affected levels 3-4, and most changes were minor.

Update July 9 2018: The IWF has released the new weight classes, none of which are repeats of any of the previous classes. Because these skill level figures were all based on 3-year averages of actual national and international competition numbers, obviously at this point figures for these new classes can’t be calculated the same way. Instead, I have extrapolated from the old classes and made some manual adjustments to account for certain anomalies. This preserves the natural variation among weight classes in terms of ability relative to bodyweight and is as accurate as such figures can be without any actual competition data to use.

Update July 5 2018: The IWF has released the new weight classes. I will be updating this chart as soon as possible. In the mean time, you're going to have to do some estimation or calculation. Note that the below listed classes are for all IWF competitions. The Olympic weight classes will reduce to 7 per gender (omitting 55, 89, 102 for men and 45, 71 and 81 for women).

Update April 28 2018: New weight classes are being introduced in July of this year. Because these figures are based on actual competition data, I won't be able to update this chart until these classes have competed for at least a year (the original chart is based on 3 years of competition), so please be patient.

Update March 23 2017: The new 90kg class is not yet included because there is not enough competition data. Once there is, the chart will be updated. 90+ will remain the same as 75+.

Update April 2015: The chart has been updated with the most recent competition results, a new level has been added, and the calculations for some of the figures have been changed. Most importantly, relativity to bodyweight is more accurate, i.e. the abillity of lighter classes to lift more than the heavier classes relative to bodyweight is better reflected in the figures.


I've finally gotten around to posting this a few years after I created it. For years people have been asking me if something like this existed and/or if I would make it. There is a Soviet classification system you can find in Weightlifting Programming: A Winning Coach's Guide and other places, but I've always thought it would be more appropriate to create a classification system based on actual American weightlifting performance and taking into account the particular circumstances of the sport in the US, including the fact that the vast majority of people interested in this kind of chart are starting the sport as adults.

Along with snatch and clean & jerk figures, I've also included front squat, back squat and total. Keep in mind when looking at this chart that the relationships between the snatch, clean & jerk and squats are not identical for all athletes, and that being somewhat outside these numbers is not necessarily indicative of a problem. Use this chart as a way to help yourself set goals for your lifting more than as a diagnostic tool for lift relationships.

Edith
I'm assuming this is Kilos?
DL
This would be great if it weren't in the metric system... Converting each number one at a time is a little much.
Will
Lol @ whining about kilos
Ryan
For half the categories I'm intermediate and half I am advanced. Can I call myself beginning advanced or super intermediate?
Dave
Wow - At about 6 mos. in (on my own) I am nowhere near any of those beginner numbers except for back squat. Will be starting to work with my local USAW coach this Saturday, so I'm expecting numbers to climb after my likely atrocious form is corrected.
Greg Everett
DL -

Yes, the numbers are kilos.

You can call yourself whatever makes you happy.
Mike D
This confirms my suspicions.....I completely suck. However, following Ryans example, I would like to call myself "Grandmaster of the Intermediates" lmao. Thanks for the chart, it definitely helps. Never really had any clue as to the level of my weights so it's really nice to see that some of those advanced numbers are in sight and definitely attainable.
Avon
Damn this is depressing, after almost 2 years I'm only just past the novice category...
Fred_A
Greg,
I've seen this being passed around by the "exercising cult". Is this something you've concocted for them, or is this a mixed effort with USAW for dedicated real weightlifters?

My post here explains exactly what it is and who concocted it.
James B
Ah delighted with this, hitting advanced Snatch and C&J, but not necessarily on squats. Guess I know now where to work
Tom Brown III
Greg,
Would it be appropriate, for Masters, to apply the age coefficients to our numbers and evaluate? Regardless, its still nice to be intermediate at 50. Thanks for the post and all the work CatAth does for the community.
HS
What does the "Total" column represent?
Greg Everett
HS -

A weightlifting competition total.
Jon
Hi Greg, Thanks for the chart - I'm just starting to learn the Olympic lifts (using your book "Olympic Weightlifting for Sports" actually) and this chart is a really usefull guide of what to aim for. Could I clarify whether the weights listed represent a 1 rep max?
Steve Pan
Jon -

The numbers indicate the lowest number in a particular lift that will put you in a given category.
Lizzi
Hi Greg, do you have similar chart for Masters?
Greg Everett
Lizzi -
Nope.
Kim
Are the novice weights what one could, in theory, expect any average joe to put up on his first day/week? Like, a starting base line? Or more of target goal for beginner achievement? I ask because, I have been training/lifting for 6 months now, with essentially zero prior weightlifting experience. By these charts I am pretty much right on the money for the novice weights. I know I have progressed personally, but as far as the weightlifting community, in general, should I be seeing bigger numbers and thus need to adjust my training?
Greg Everett
Kim -

The novice numbers should come with some training under your belt - some naturally gifted folks may do them right off the bat, but that's not expected.
Martin
Thanks for the chart Greg. How does one calculate the total? (Newbie question)
Steve Pan
Total is the best Snatch and Clean & Jerk you have performed on the same day (in competition).
Crossfit Sono
Thx for the chart Greg!
Andrew
Brand new to the sport. I weigh in at 93k, so does that put me in the 94 bracket or 85?
Thanks.
Steve Pan
Andrew -

That would put you in the 94kg category.
Jack Mulkey
I have ~6 months of weightlifting experience and by this chart's standards am a level 3 lifter in the 94kg weight class (233kg total on the dot). However, it seems that my squat strength surpasses my lifts by a good 20kg. I recently started the Double Day Squats program (following the 12-week starter program) and was wondering whether or not this was a good choice. I chose this program, because I want to continue to get stronger in my squat so that it isn't a limiting factor while I improve my lifting technique and become more proficient, was I right to do so?
Steve Pan
Jack -

That should be okay to run a squat cycle and then re-evaluate your needs based on how the cycle goes.
Todd B
it's been asked before, but I though I'd repeat to reflect continued interest in seeing additional data....it would be really cool if there was a separate listing for Masters, and even better if further broken down by age group within Masters (as I'm in the over 50 group and seeking to compare to my peer group, not just any 35+ Master). just the same, the info provided is a nice grounding. thanks for updating and publishing.
Kim Kate
Are there any differences based on age-- at meets?


There are no changes for age. If you are looking to compare numbers for certain age groups you can check out the site here.

First off thanks for all the great free information that you are giving us. When is the next update for the chart going to be available?
Not any time soon. The competition numbers don't change that much year to year.

Ann
How about a chart adjusted for age and gender?
It already includes gender... Regarding age, I still stand by my earlier comments - you're either at a certain level or not. If you want to know how you compare to lifters of your age, you can view results and records from masters competitions quite easily.

Greg Everett
Clarese
The weightlifting marker system has been around for decades, this isn't anything new.
You know what else isn't new? People like you who can't read but can't wait to post some snotty comment anyway. From the very article you commented on:

Rick
The weights the advanced lifters are hoisting are do to STEROID overuse and not real training , lift without STEROIDS and put in the hard work , that is what I have always done for the last 50 years a 220 pound curl X3 without STEROIDS and at a body weight of 155 pounds ..
Marcela
I am between level 3 and 4 for a 49kg BW. My snatch right now is at 51 kg and CJ at 62 kg. Back squat at 96 kg and Front squat at 78kg. Glad I read this, gives me a number to work towards and definitely need to focus more on my technique. :)