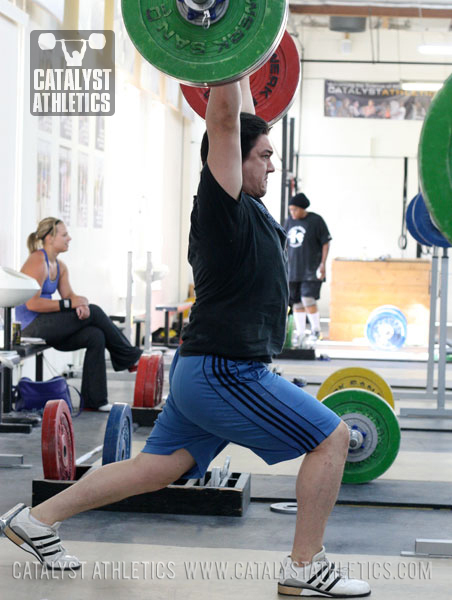 Mike Asks: In most sports full extension and the "follow through" are important - you drive through your legs, hips, torso, shoulders, and arms with a "follow through" after making contact with the ball, or the jaw. In doing the jerk you pull away from, or drop under, the bar as it is driven upward, so the maximum effort comes before the full extension - I can think of no other sports in which this happens. Wouldn''t then the "push press" where the drive continues to full extension make more sense for athletes training for other sports?

Greg Says: Interesting thoughts and something I've never considered, so hopefully I can come up with a reasonably helpful answer.

First, it's important to clarify what's happening in a jerk. The athlete is by no means dropping or pulling away from the bar after the leg drive; he or she is actively pushing down under the bar. This is essentially the same upper body action as in the push press or press, but without the legs actively driving or anchored against the ground.

In the jerk, the athlete accelerates the barbell upward by driving with the legs, but upon reaching complete extension in this effort, begins to move the feet into the receiving position, which, at least momentarily, removes all pressure against the ground. During this time, the lifter is pushing violently against the barbell, which replaces the ground as the anchor against which the athlete is pushing. That is, now the effort to push against the barbell is pushing the athlete down rather than pushing the barbell up. The feet will reconnect before the arms are completely locked (or should, at least), but the pressure against the ground is kept minimal to ensure complete lockout of the elbows before the legs are tightened to secure the receiving position.

In other words, there is definitely a follow through of the upper body to the action of the lower body as you describe occurring in many sports; what confuses the issue is that during the motion, the body changes direction.

The follow through in the push press is much more obvious since the body moves in only one direction and there is a continuous upward motion of the bar/body unit overall. However, this is where it gets more interesting (at least to me). In what sports do you see this kind of follow through with this much resistance? Maybe abbreviated versions in football, rugby and similar. But consider striking, shotput, etc.: the lower body initiates the acceleration and movement and the upper body follows through; but the amount of resistance during that follow through is extremely minimal and the motion is consequently very quick. In a punch, there is no resistance at all until near the termination of the strike; the weight of a shot (8-16 lbs) is virtually nothing compared to the weights a thrower would be push pressing (or jerking).

So neither exercise will perfectly mirror sporting action. This is a pretty common theme; there''s really no way to recreate sporting action in the gym, which is why athletes need to play and practice their sport. But both exercises offer motor skill, strength and power training that offers benefits to any power or speed athlete.


1 Comments
Patrick Henry
In regards to athletes, we strive to provide a CNS stimulas to strengthen neural patterns in the body. Stronger neural patterns allow the brain to send messages to the extremities much faster. This translates to more explosiveness which is conducive to all sports. In this respect, wouldn't the Jerk would be more effective? Not to say the Jerk is better and should be used exclusively over the Push Press. Both movements should be utilized in tandem. Simply stating with respect to CNS stimulas, the Jerk should warrant an extra brownie point for increasing athletic performance.