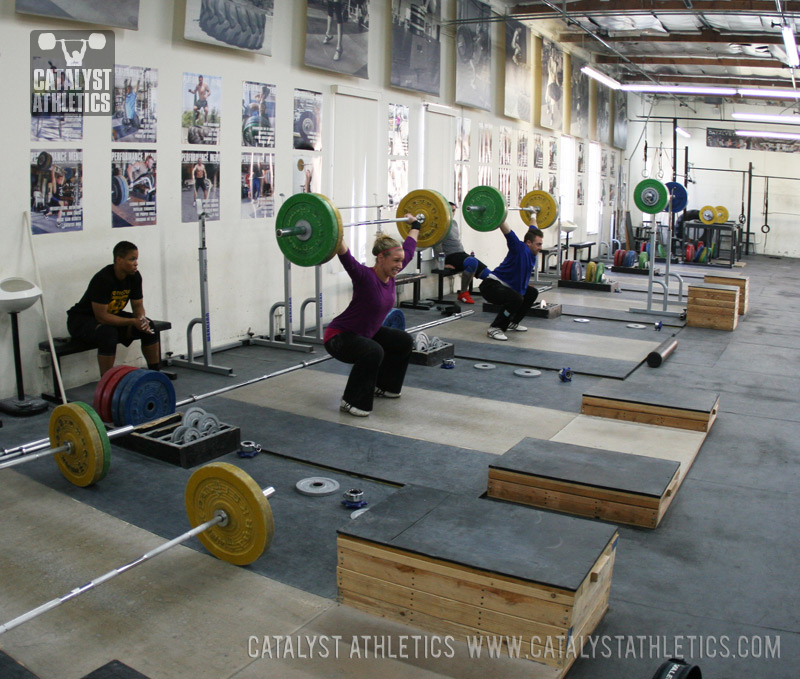 MULTI-TASKING!! Everybody knows what this is, right? I’m sure you do, because our society is obsessed with it. We’re all expected to be able to juggle several jobs at the same time, making every one perfect and not showing any fatigue or frazzle. That’s the way of the world nowadays. No wonder you can’t watch TV for more than ten minutes anymore without seeing a commercial for anti-anxiety medication. I think I’m going to officially name us The Panic Junkie Generation.
Multi-tasking has really worked its way into the world of strength training as well. The biggest trend I’ve noticed in the barbell world over the last ten years is that most people don’t want to lock themselves into any one particular discipline. Being a full-blooded, 100% Olympic weightlifter isn’t the way the general population wants to go, nor do they want to be 100% full-blooded marathoners or gymnasts. People seem to want to blend a variety of exercise fields into one training program to make themselves perfect machines of strength and conditioning. Obviously, CrossFit is the center of all this. I don’t know if CrossFit became popular because people want to multi-task, or if people want to multi-task because CrossFit is popular. It’s the chicken-and-the-egg question. Who knows if the chicken came first? Maybe it was the egg. Maybe there really is no chicken. Maybe both the chicken and the egg live only in our subconscious. Sorry, I’m listening to The Doors right now.
But here’s a thought I want to pose to you. If you’re reading this blog, you’re probably pretty serious about training the Olympic lifts. And I would guess that many of you also like to run, bike, do met-con stuff, gymnastics exercises, etc. Okay, I understand. But something you need to accept is that all of those other forms of exercise will have an impact on your Olympic lifts. Running and met-con stuff will add fatigue to your lower body. Gymnastics exercises will add some fatigue to your shoulders and elbows. All of this additional fatigue will affect your ability to improve in the Olympic lifts. If you’re really serious about improving in the snatch and clean and jerk, you have to have an extraordinary level of focus and specificity about how you train and what your program looks like. If you’re serious about being a competitive weightlifter, you need to drastically reduce or eliminate much of that other stuff.
Now, I totally understand that many of you who are reading this are saying to yourself, “Listen, I want to improve in the Olympic lifts but I’m also serious about my conditioning and CrossFit-type of stuff. Those things are a big priority to me.” Gotcha, I understand. And I want to make it very clear that you definitely can improve and make big strides in the Olympic lifts while still doing running, met-cons, gymnastics, whatever. I’m absolutely not saying that you have to have 100% tunnel vision to become a better weightlifter. You have to have 100% tunnel vision if you want to make the Olympic Team. But for those of you who want to integrate a variety of training disciplines to make yourselves into rock-hard strength samurais, it can be done.
You just need to make sure that you develop a very careful training program that prioritizes things appropriately. If you’re going to run and lift on the same day, fine. If lifting is more important to you than running, you need to lift first. If you want to run first, that’s fine. But the running will affect the speed of your Olympic lifts. Make sure you’re clear in your mind about what you really want to accomplish, and then set up a plan. There will definitely be some trial and error involved. You probably won’t hit the perfect plan the first time you try it.
Bottom line…know what your priorities are. Make clear decisions about what you want. If you want to win the World Weightlifting Championship, met-cons won’t be part of your life. If you just want to look good naked, get going on those met-cons. Multi-tasking isn’t a bad thing. It just has to have some intelligent organization to keep it from looking like wacky chaos.