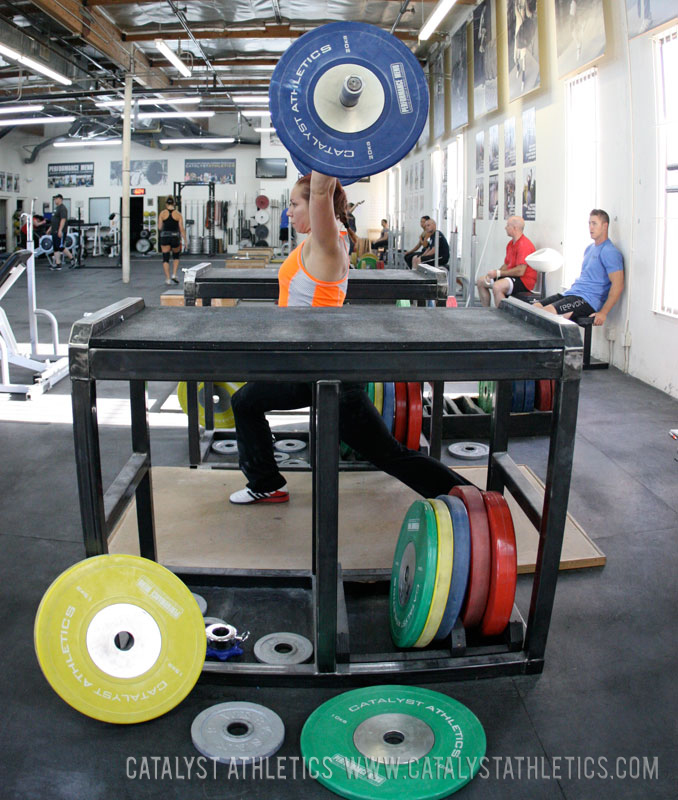 There are a lot of different ways to train as a weightlifter, but two broad categories can be described by either planning and prescribing all the numbers (e.g. weights, reps, sets) or training by feel, which can mean making decisions on everything from weights to reps to the actual exercises performed on a given day.

Personally I like it all—nothing to extremes. I believe strongly that there needs to be planning, both short and long term, of an athlete’s training, particularly for competitive athletes who need to perform optimally on certain dates. That said, I also believe strongly that there needs to be flexibility built into any plan and a willingness to make changes based on what’s actually occurring when that diverges from what’s expected.

The problem with rigid planning is that there are far too many factors that influence a lifter’s recovery, mental outlook, motivation, energy and focus to know exactly how he or she will perform on a given date weeks in the future. When crafting a training program, the coach has to make assumptions based on historical observations. That is, the coach has a sense of how the athlete responds to training, and the program takes this into account when determining weight and volume progressions. Of course this is all based on “normal” for a given athlete, and we all know that we’re lucky if we can maintain normal for any two or more consecutive days.

The problems with training by feel are numerous and vary somewhat depending on the athlete. First, most athletes (like most people) want to do what they’re best at, which is, unfortunately, usually the things they need to work on the least. Strong squatters like squatting; good snatchers like snatching. So if an athlete is determining his or her day to day exercise selection by feel, the majority of the time, that athlete is going to feel like doing the exercises needed the least and will continue to excel at what he or she is already good at, widening the gap between those things and the things that really need work.

Next, athletes tend to be very driven people, and this usually makes decisions on weight and volume unreliable. Typically good athletes want to do more: more weight, more sets, more days in the week, more everything. This kind of motivation is good, but it can get you into trouble quickly. It doesn’t take much time of overdoing it to dig yourself into a big hole. Once you’re down there, it can be very difficult to convince yourself to back off enough to climb back out. And now you’ve just regressed and have to get moving again the right direction. You may have managed to collect one or more injuries or at least pains that disrupt your training along the way.

Timing can also become a problem for competitive lifters. It’s great to do big PRs in the gym, but if you can never replicate those performances in competition, it doesn’t matter much. Training entirely by feel leaves you vulnerable to blowing yourself up too soon and winding up at a meet lifting far less than you know you’re capable of. Worse, if you don’t recognize the state you’re in and try to lift those big weights anyway, you bomb out.

I prefer designing programs with a broad plan to cover the time period in question (i.e. leading into a competition), then refine the plan by mesocycle (usually 4-week blocks with a pretty good idea of weekly volume), then actually write one week at a time with all the details (weights, reps, sets). Each week is written based on the long term plan and what happened with the athlete during the prior week. I know what I want to do the following week, but I may have to make some changes if the previous week didn’t go as well as expected, for example; likewise, it may be that the athlete was able to do better in the previous week than expected. In any case, the next week can then accurately reflect the lifter’s present state.

Day to day I keep my lifters’ programs in front of me during training so I can make notes that will help guide my decisions as the program progresses. If weights or reps need to be changed during the workout, I do it and note it. Sometimes I’ll even change exercises if needed. The point is on any given day, I know exactly what I want to accomplish, so I can make smart decisions. I know what I want to happen tomorrow, next week, 8 weeks from now, so I can ensure that whatever changes I make on the fly align with those goals rather than disrupt them.

I encourage everyone to use his or her judgment while training and make each workout count. But make sure you’re making that workout count as one small part of a long term program.

Jake
You write some good, pertinent stuff
Tiffany Sentani
Great article, great point. New to site band loving it.
Michael H
Can you comment a little on how you might adjust the program if a lifter has a good or bad previous week or feels strong or run down?
Greg Everett
Michael -

If they're feeling very good, I may make larger increases in weights the following week than I had planned or expected to be able to. If they have a bad week, I try to catch it early so we can back off that week rather than push through an entire horrible week - but this depends on what that week is supposed to feel like. Often I expect it to feel horrible.