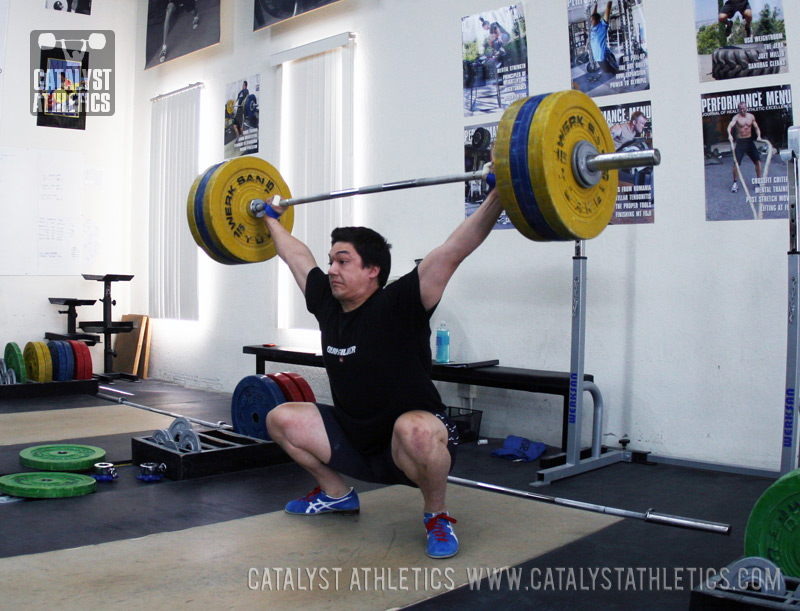 I went to a weightlifting meet last weekend where almost sixty lifters were competing. It was a huge contest and a very long day, but it was a great one too. As with all local meets, there was a wide range of athletes in attendance. I recognized a few experienced names from recent national championship competitions, and of course there was also a large crowd of newcomers who were still in the early stages of their weightlifting training. As I watched lift after lift, I got an idea for this post. Actually, I have to go back and revisit a topic I wrote about several weeks ago in order to explain what I’m thinking about.
One of my recent additions to this blog was titled “What a Lovely Bottom,” and it was about the incredible importance of having a perfect bottom position when an athlete is attempting to master the Olympic lifts. Most of this post dealt with flexibility issues, the challenges athletes have when the bottom position isn’t natural for them and they have to work the daylights out of their stretching just to get down into a comfortable deep receiving position in the snatch or clean. In other words, the main focus was on how much effort has to go into developing a bottom position if you weren’t born with one.
However, what I saw at last weekend’s meet was a different issue. There were many lifters at this meet who were having obvious difficulty with the bottom position in both the snatch and the clean. They didn’t look comfortable or stable down there. But from what I could see, the problem usually wasn’t with their flexibility. The problem was that they just weren’t jumping their feet into the proper position when they finished their pull and went into the turnover phase. Their feet were either too narrow or too wide when they hit the bottom, and it created some serious awkwardness with their ability to secure the bar over their heads or on their shoulders.
TOO WIDE: In this case, the athletes were transitioning into the bottom position by jumping their feet out to the side way too far. Their bottom positions basically looked like wide-stance powerlifting back squats. And as with a wide-stance powerlifting back squat, the depth was around parallel or slightly lower. When this type of foot spacing is used, the athlete will never hit the kind of deep bottom position necessary to really handle maximum weights. Their lifts will always be more like a power snatch/clean than a full snatch/clean, and this will ultimately limit the amount of weight that can be lifted.
TOO NARROW: Here, the athletes basically aren’t moving their feet from the spacing they used for the pull. Almost every successful weightlifter in the world uses different foot spacing for the pulling and squatting phases of the lifts. Very few people can sit into an effective bottom position with their feet only eight or nine inches apart. When athletes try this, they have a “bunched up” look in the bottom where their feet are too close, which causes the butt to stick out behind them, which causes the torso to lean forward, which causes a technical disaster when attempting to hold a snatch overhead or a clean on the shoulders. The more the torso tilts forward, the more inefficient and dangerous the Olympic lifts become. Much of this could be avoided by simply spreading the feet out wider, which brings the butt down closer to the heels, which lets the rest of the body maintain a more upright posture.
As I’ve written before, most of the focus people seem to have when they learn the Olympic lifts is on the pulling movement. Everybody wants to rip the bar as high as possible, which is terrific. But the whole lift will still be shot to hell if the receiving position isn’t correct. I’m not sure if the athletes I saw were having this trouble because they weren’t taught correctly or because they haven’t been taught by anybody, period, and they’re just trying to figure it out themselves. Whatever the case, it’s essential that all lifters pay a lot of attention to their foot spacing in the squat position of the lifts. Being just a little bit too wide or too narrow could be the difference between the weight you’re currently lifting and a five kilo increase. Is a five kilo increase something that you would be interested in? Would it make you happy to lift more weight? Yes, you say? Then make sure you’re paying attention to everything, every little detail of your technique. Don’t settle for the “just grab it and rip the hell out of it” approach. There’s more to it than that.

David Griffin
As somebody who learnt to power clean, then power snatch and is now getting familiar with the snatch and Clean & Jerk in the weightlifting contest I cannot concur enough.

For the longest time I had absolutely no idea that there was a difference between the pulling and squatting positions even to the point where I didn't see the point of the 'snatch land' part of the burgener warmup. I was mostly trying to keep my feet narrow to avoid the 'wide stance power clean' that you often see footballers doing.

A proper coach has been showing me the light for the last couple of weeks though.

sam aguirre
Great post, I was having a lot of problems with this a few weeks back and had to back off for a while till I addressed the issue, and like you said it made the difference between that miss or 5 kilo gain.... I wanted the gain!