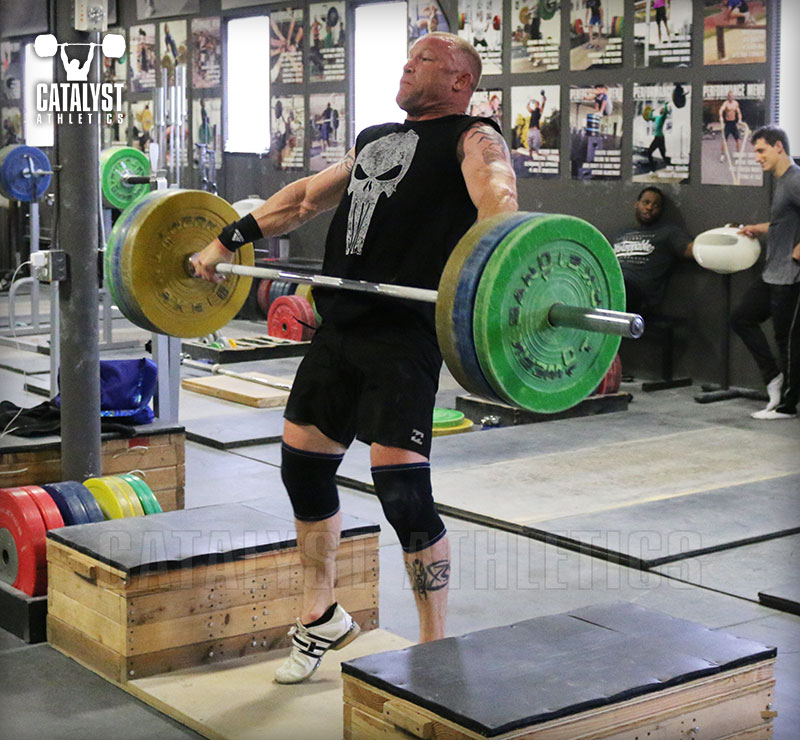 We all probably realize that work ethic is one of the most essential qualities a weightlifter can have. When you’re really pushing the limits of your ability in this sport, the physical challenges are beyond almost any other type of activity you’ll ever attempt. If you’re not a hard worker, you don’t have a prayer.

I think we learn our work ethic as we grow up. Some of us learn to be hard workers because we come from parents who did it all their lives and, when we become adults, we simply imitate what we saw every day of our youth. That’s one way it can happen. Others have situations where they learned failure at a young age, and they develop an intense work capacity because they live their lives terrified of feeling that letdown again. They experienced shame once, so they bust their asses to make sure it doesn’t happen anymore.

My father is the main source of my work ethic. He was a coal miner his whole life, just like his father and grandfather before him. Coal mining is one of the hardest, most dangerous jobs in the world. Most of us would probably hate it. I know my dad did. I used to sit at our kitchen table when I was little and watch him as he got ready to go to work. His face was tired and heavy, dreading the ten-hour shift he was about to put in. The ninety-minute drive didn’t help anything either. You see, we lived almost a hundred miles away from the mine, so he had to drive that distance to and from work every day. There was another town that was only twenty minutes from the mine, and we could have lived there. It would have made his life a lot easier. But the town was a dump and the schools were toilets. My dad wanted his boys to get a good education, so he spent an extra three hours on the road every working day of his life. He did this for years, going back and forth to a job he detested, so he could provide for us.

He has lung disease now, largely caused by all the years of inhaling coal dust. The doctors put him on a full-time oxygen machine because he can’t breathe on his own. Up until a few years ago, he could still walk around and do some physical activity. But now the disease has progressed to the point where he can’t do much besides sit in his recliner and gasp all day. Any amount of exertion is too hard on his lungs, which are functioning at fifteen percent capacity.

When I go over to the house to visit him and my mom, we talk a lot. I have to do most of it because he can only get out about five or six words at a time. He sits way back in his recliner because it’s too hard for him to breathe when he’s sitting up straight, and he asks me how my job is going. It makes him happy when I tell him about it. He’s really glad I love my job, because he didn’t love his and he wants better things for me. I understand this when I watch him sucking in those deep breaths, contracting every muscle in his body just to get enough air in his lungs to stay alive. What he goes through every second of his life is tougher and more painful than anything I would wish on my worst enemy. And he handles it the same way he handled his years in the mine. He just keeps trying as hard as he can and doesn’t complain.

I don’t think I’ll ever be able to do anything that will let my dad know how grateful I am that he basically sacrificed his entire life for me, my brother, and my mom. He worked that bastard job to put a roof over our heads, food on our table, and money in our bank account that would give his sons a chance to go to college and become the first Foreman men who didn’t have to work in the mines. He gave up his dreams of professional fulfillment. Twenty-five years of driving three hours a day back and forth from a coal mine, breathing in poisoned air that would eventually give him black lung and destroy his health…he did it all for me. I’m not a good enough writer to truly describe the admiration and respect I have for his selflessness. I guess I just have to say that I love him, and the fact that he’s my father is the thing I’m most thankful for in the world. I hope he knows that.

My work ethic comes from a sense of responsibility I have to him. Someday, his lungs are going to stop working and he won’t be here anymore. When that happens, part of my soul will be gone. I already know I’ll never be able to recover from it. But if I live my life the right way, maybe his spirit will stay alive through me. All of his effort and sacrifice won’t be wasted if I wake up every morning and push myself with the same honor and commitment he had. These thoughts are always in the back of my mind, whether I’m training or coaching or putting the check for my house payment in the mailbox. I think that’s the best way I can pay my respects to the man who ate a lot of misery to give me everything I have.

John Foreman’s life set the standard I want to live up to. My loyalty to him is the motor for what I do. All of you have some kind of motor in your heart, something that functions as the nucleus for your strength and passion. Yours might sound like mine, or it might be totally different. Whatever the case may be, I think it’s a wonderful thing to get your character from a higher power. For me, it’s my dad. You should take some time today and figure out what yours is. When you’ve got it pinpointed, find a way to show some appreciation. Even if the source of your work ethic is something lousy that propels you forward out of dishonor or regret, you have to be grateful because it makes you what you are.

Ivan Turgenev wrote, “Love is stronger than death or the fear of death. Only by love, life holds together and advances.” This is how I feel about my father’s life, and how I think we should all feel about the things that mold us and give us resolve.


8 Comments
Cait
Without words right now. Very grateful to you. Thank you
Alli
This one brought me to tears today. You truly are an inspirational writer.
steph
in tears... i lost my mom suddenly and unexpectedly a few years ago, and i try to live my life everyday in a way that would make her proud.
thank you for sharing...
Steve Platek
Spot on mate!
You could have been describing my life and father, except my dad worked on the railroad. Work ethic, as a professor I always say there are students with inspiration (smarts) and those with perspiration (work ethic), I'd take the latter over the former anyway!
Dillon
Awesome.
Spencer Mackay
Oh yes!
Danny Sawaya
Amazing article. Puts everything in perspective.. Thank you
Justin Ott
Touching article. I recently found myself thinking the same thoughts during some grueling training. I remembered how my Father instilled a gritty never give up attitude in my early days as a hockey player. It was then I learnt to push hard day after day, and that hard work and discipline is just part of life. My dad also commuted 1.5-3 hours a day depending on traffic so he could work as a garbage man to support our family. Hats off to hard working fathers who push their children!