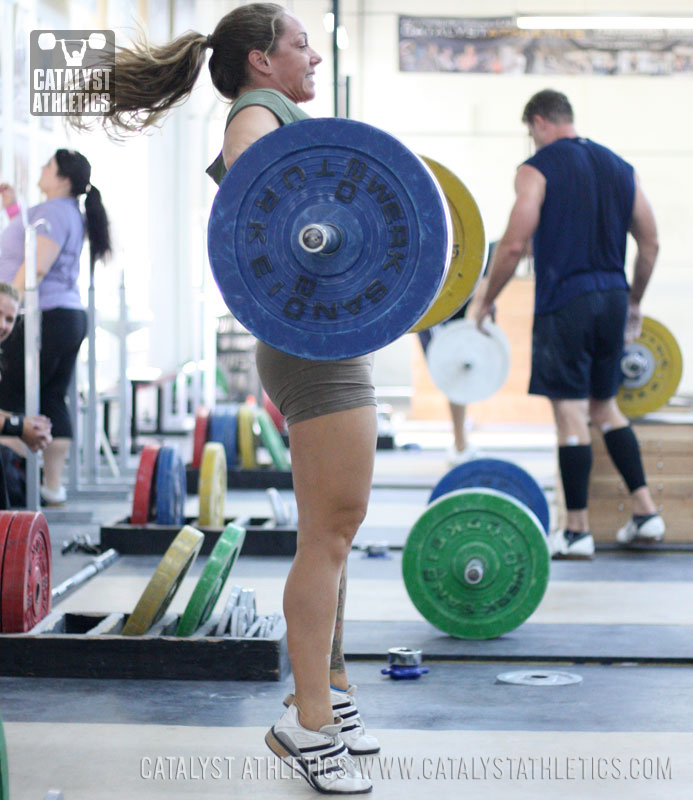 Traditionally, snatch and clean pulls are prescribed as a percentage of a lifter’s maximum snatch or clean. This generally keeps pulls appropriately quick and technically sound rather than allowing them to get slow and change the lifter’s balance and timing. Typically pulls are done with 80-105% of the lifter’s best snatch or clean, and for a lifter who is well-developed technically, this is usually appropriate and effective.

However, for newer lifters who nearly always have a surplus of strength relative to their technical ability to use that strength for the snatch and clean, this range of percentages is far too light, and aside from use as practice, is ineffective.

I’ve considered trying to come up with a formulaic method of prescribing pull weights based on the ratio of snatch or clean to the squat, but with some thought, it becomes clear that there’s far too much variation for even this method to be accurate.

This situation, like many in weightlifting, demands a little intuition from the coach. You’ll need to select pull weights based on what you see. When first training the athlete, start conservatively and work your way up in fairly small increments until you reach a weight at which the athlete is moving properly and at the level of effort that you’re looking for. This of course will change depending on the goals for the workout, or with the time within a cycle. For example, if the lifter is just learning to pull, you won’t want to see them struggle with the weight. If you’re at or near the beginning of a training cycle, pulls shouldn’t be particularly challenging—if the athlete is struggling to pull the weight on week one, you don’t have anywhere to go over the remainder of the cycle. And if you’re near the end of a cycle and want to really challenge the lifter’s pulling strength, pulls should look difficult, although still be done properly.

Don’t make the mistake of not allowing the lifter to pull heavy just because it exceeds the normal range of relative percentage—if a lifter is technically challenged, all you’ll do is limit their strength development. This holds true even for lifters who are not brand new—some lifters who seem technically proficient will still be, for various reasons, not snatching or cleaning as much as you might expect based on their pulling strength. Some lifters, for example, can be very strong pullers but weak squatters, so their cleans are low relative to their clean pulling strength. Another example would be a lifter who has a poor overhead position in the snatch and consequently can’t snatch as much as he or she would be expected to based on how much he or she can pull with ease.

Once you’ve gone through some time coaching a given athlete, you’ll have a sense of what he or she is capable of with regard to pulling weights, and if you pay attention and take reliable notes, you can use that to prescribe pulling weights in the future irrespective of how they relate to that lifter’s snatch or clean.

Jonathan
Greg I hope I'm not out of line in asking because I have tried searching allot and was wondering if you could direct me too some instructional videos on the catapult method vs triple extension. Maybe you have covered it and I didn't see it. Thanks
Greg Everett
I don't know of anything that really compares the two. There's a thread on our forum from a while back where I discussed my thoughts on the whole catapult thing and McCauley chimed in. Should come up quick w a search for catapult. I wrote an article here called "hips, meet bar" that might address some of your questions too.
CF S&M
catalystathletics.com/blog/blog.php?blogID=1216
Brendan Sonnichsen
search for "Don McCauley and the Catapult Technique Part 1 "... two part vid on youtube
Randy Long, Reality Workouts
I work with several novice lifters, and I've found it effective to set up 2 bars: a heavier bar for pulls, usually done for a single or double, and a second bar with the snatch or clean weight. I have them do a snatch or clean pull, then step over that bar to the lighter bar and go right into the full lift with the lighter bar. They get to work with their available strength, and have a lot of confidence when they go into the full lift and it feels so much lighter. I've had several novice lifters set new PRs on a regular basis inthe early stages of their training using this method.
Tommy Malone
If pulls aren't heavy for a novice lifter are high pulls permissible or is it better to up the weight?
Steve Pan
It should be okay to up the weight a bit. Make sure you are hitting good positions and getting full extension.
Tommy Malone
Thanks! I tried that last night instead of high pulls. I'm in the 4th week of the 6 week basic rep cycle. This is 110% and any pointers would be greatly appreciated.

Set tension against the bar at the start before you start pulling. Make sure it is a smooth pull off the ground. Hold on to the bar and push a bit longer at the top. Try to keep the chest up and the shoulders on top of the bar as much as you can. As you break from the ground you get pulled forward and over the bar too much as there is no tension to keep you in good position.
Tommy Malone
Steve, thanks! That's been a big help with all the lifts. These are last nights.
http://youtu.be/Zmye8BinKjM
http://youtu.be/KuAikUoApfs
How strict should be in regards to counting sloppy reps? I've been fairly consistently no repping myself if I have to chase it around or I'm really rocking on my toes in the bottom of a snatch....Thanks
Steve Pan
Try to keep the reps as sharp as possible. If your reps are sloppy it will carry over into the lifts. The first rep on the first video is a bit better. Try to extend straight and keep pushing through the ground as you follow through. Try to pull the elbows upward to keep the bar close rather than letting them drift back as the bar comes up. Try not to add too many reps on top of the volume. You only get so many chances to make good reps, adding too many extra may throw you off course. Make do with the volume you are given and make every rep count.
Gary Echternacht
Pulls are a world unto themselves. So many variations and reasons to do each variation. I think the biggest problem for athletes and coaches for that matter is that they don't know or understand the reasoning behind the use of different types of pulls. If one understands the reasoning or what the exercise is supposed to accomplish, it's hard to do something wrong.