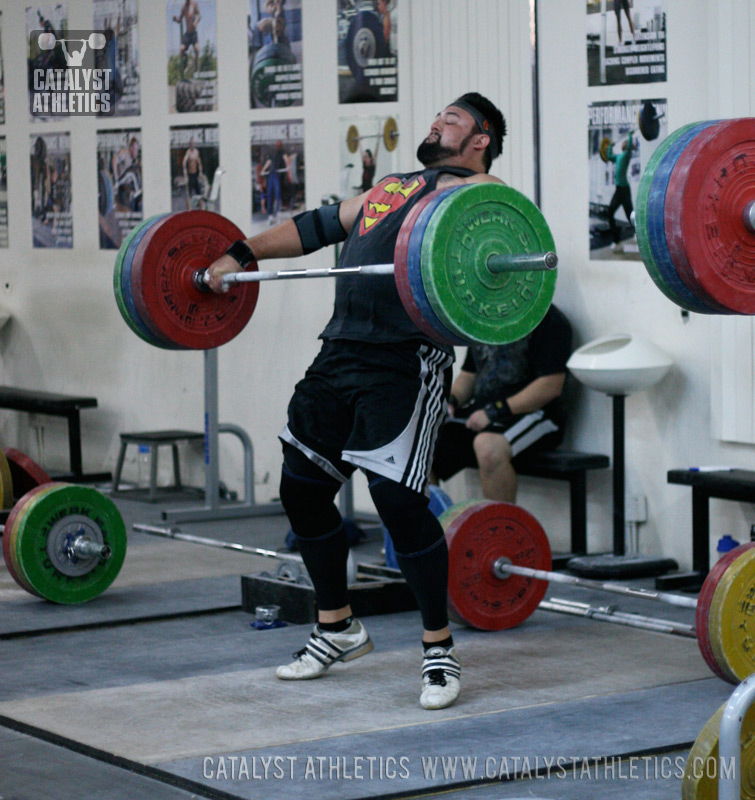 I have almost nothing helpful to say about nutrition.

Everybody who reads this probably knows more about it than I do. My study of it pretty much stopped after a class I took my freshman year in college. I did well in the class, though. The professor made copies of an essay I wrote and gave them to the rest of the class…told them I had a “heightened understanding” of how to eat for performance. I didn’t tell her I was eating Oatmeal Crème Pies when I wrote it. That probably would have disappointed her, but it would have been funny.

When I was doing the best lifting of my career, I ate a fairly undisciplined diet. It wasn’t 100% garbage, but it probably wasn’t nearly as strict as what most of you are following now. Would I have been better if I would have cleaned it up? I don’t know, probably. But I was a superheavyweight, which changes everything. And you have to be a super to understand that.

Funny story- I was walking through a mall with my dad once, and we saw a guy who probably weighed five hundred pounds. I nudged my dad and said, “Look at that guy, he’s in pretty bad shape.” My dad said, “Yeah, but I bet he had fun getting that way.”

I just found out what the word “paleo” means about three weeks ago. That’s probably the first nutritional learning moment I’ve had in ten years. I think it’s got something to do with only eating things that were on the earth back in caveman days. I’ve seen pictures of cavemen, and I don’t want to look like that. Their foreheads are too big and they look like they’ve got poop smeared all over them.

I did start taking fish oil about four years ago. Holy hell…that stuff makes a big difference. It’s definitely something I wish I would have started a lot earlier.

One of the quirky little catch phrases people use these days when they’re talking about fitness is how they “want to look good naked.” Looking good naked is obviously connected to a nutritious diet. I want to look good naked too, but I’m not obsessed with it. During those times when I’m gonna be naked, I think I can rely on my charm, even if the visuals aren’t perfect.

Don’t get me wrong, I’m not a complete slacker in this area. Hell, I was just at Subway yesterday and I had a pretty good moment of discipline. The guy who was making my double-meat Chicken Bacon sandwich gave me the ranch dressing I wanted, then he looked up and asked me if I wanted more while I was picking out my cookies. I felt like barking out, “Hey!! I don’t know if you noticed or not, but I’m trying to decide between white chocolate and peanut butter here!! I trust you with the ranch, okay pal?! Just use your best judgment!!” But I didn’t. I just said, “No thanks, no extra ranch.” If that’s not self-control, I don’t know what is.

Okay, all kidding aside…

I didn’t pay enough attention to nutrition when I was younger, and I do think I would have been better if I had tightened it up a little. I’ve improved as I’ve gotten older, and I think I’m probably eating a better diet now than I ever have. Plenty of fruits and vegetables, lean meats, tuna and cottage cheese for lunch every day, only eating dessert once a week, some fast food here and there but not huge amounts of it, etc. My doctor says all of my levels are fine (including cholesterol) but my blood sugar gets high occasionally. I’ve found that blood sugar readings can be pretty wacky. It seems like they can spike dramatically based on something you ate the day before you get your blood tested. That’s been my experience, anyway.

Eating is a huge source of pleasure for all of us. We love it more than most of the things we do. Because of this, I’m not gonna turn eating into a source of dread. I’ll continue to eat things that make me happy, while still maintaining basic responsibility and discipline. I don’t want to get diabetes or heart disease, even though I know these things can potentially hit you even if you’re doing everything right. I feel a lot better when I eat healthy, and feeling good on a daily basis is a nice thing. Being able to train well without a lot of pain is nice too, and diet plays a big part in this. I’ve actually found that hydration is probably the most important factor in all of it, to tell you the truth.

You can do whatever the hell you want, and that includes disagreeing with this post. Your life is yours, and mine is mine. I advise you to eat with willpower if you want to be a successful lifter. That’s my recommendation as an athlete and a coach. But I also don’t think you should eliminate happiness from your eating. That’s my recommendation as a human being. We only get one shot at this thing…life. Personally, I want mine to be fun.

Taquitos are fun. They never stop making me happy. That’s more than I can say for some of the people I know, for crying out loud. So I’ll never turn my back on Taquitos. You stay loyal to the ones who have been loyal to you.

Francis
Matt, I've read a lot of your posts and I have to say this is by far my favorite.
Baron
Your doctor is living in paleolithic times. He/she should be measuring your "hemoglobin A1C", not your blood sugar. As you noticed, blood sugar is a measurement about what's going on now. HgA1C measures an average over the last three months. Most competent doctors have been ignoring blood sugar for a decade and measuring HgA1C instead. I strongly, strongly recommend everyone getting it measured at their next physical. It is the single best way to reliably know if you are headed for diabetes and need to modify your diet. Mine spiked after my kids were born and I stopped taking care of myself, but my blood sugar was still "fine" on the day of the physical.
Angela
Thanks for this. I've been struggling with whether or not I should "diet" since joining my weightlifting team. I'm in the women's super class, and never expect to drop below it (currently 104). It has taken me about 10 years to get over wanting to be skinny, and now I just want to be stronger. I want to snatch 100 and clean and jerk 120! Something tells me paleo isn't going to get me there...
Jay
Great post!
James
I've been following your blog for sometime now. This made post made me happy. I love it!
Casey
Matt you make some great points, and I agree with most of them. However, to Angela, be strong and screw being skinny. Always remember that Strong is the new skinny and strong is way more sexy than skinny!! On the same note, paleo can get you big and strong if done right. Check out Crossfit Football (I know I said Crossfit but I added Football at the end which makes it ok because John Welbourn is a genius and a huge man!) and their take on the Paleo diet for power athletes. They have a break down for people that want to get big and strong. So though people see paleo as a way yo lose weight, but it is also a great way to get big and strong, AND you get to eat a ton of meat/BACON!! What more could you ask for?!
Angela
Thanks for that Casey. Very interesting... I have already cut 90% of the wheat I used to eat from my diet, mostly because of a gluten intolerance. I'm not necessarily anti-paleo... I can definitely see the health benefits. I'm just afraid that I'll stop making gains. However, I am starting to see more information along the same lines of crossfit football, for strength athletes. I'm going to be working on cutting the other grains and *gasp* sugar from my diet. I'm a huge sugaraholic, and I KNOW that cannot be good for my training! And, yes... EAT ALL THE BACONS!!!
Jocelyn
Always entertaining and good for and audible laugh:)
Stacy
I am a health coach, and I recommend the 90-10 diet. 90% healthy choices, 10% screw it. Loved your article, you made me laugh. :)
Kevin
Thanks for the article, Matt. I lifted as a super most of my life so I DO think I know what you mean. I did manage to sweat my way down to the 110kg. class for a while and then they changed the weight categories so I gave up. Not having to make weight gave me a sense of relief and freedom. I was actually most comfortable at around 120kgs. I worked as a chef all my life too so I enjoy food a lot. If you know you're not going to be olympic caliber eat sensibly and enjoy life and weightlifting.
Spencer James Mackay
Yes Matt!
Jon Balfe
Matt, I am all for having a good time eating. Discipline is necessary in our western dietary culture. I just wish the food and drug administration was more forward with the risks of the foods they present to the population. Personally, I do not want to have self control when I eat. I want to eat as much as I want or feel I need. I find this is only possible (with no negative health effect) if I am eating a clean diet. I am not a super, but maybe super is not that super after all...The only cause and effect with inflammation (according to John Hopkins) is with lowering body fat....
Shannon
"I think I can rely on my charm, even if the visuals aren’t perfect." is my new catchphrase. Thank YOU, sir.
Kjell
That was extremely hilarious and informative. I need to read your other posts.
Evgeny
Good article Matt. In my case, I love Corn Nuts. Never going to turn my back on those.
Alima
Ive been eating paleo for 3 years. Regardless, I found this article to be hilarious! I couldn't stop laughing!
Nice job!
Multivitamin Easy To Swallow
It's such a very interesting blog. Yes, self-discipline is necessary when we talk about eating so we can be sustain a healthy and balance nutrition.Good post! Well done.
Rikke
Excellent post. Sometimes people, for sure myself included, get too obsessed with "clean nutrition" - so much they forget that life is a one-time event, and realize it makes them feel (mentally) crappy.

Best way to lose weight while improving on the sna
Way to cut weight while getting stronger in olympic lifting?
Jose Torres
novice lifter in olympic lifting at age 39.
Crossfit Greenpoint
Tami
I live this. Thanks.
Tami
Opps. That should say "love", not "live". Even though it is pretty much the mindset I live by.
Gary Echternacht
I do think that diet is important if you are a body builder, but if you are a weightlifter, it's pretty much irrelevant as long as your diet isn't strictly butter, Well written, entertaining, kudos to you for the piece.