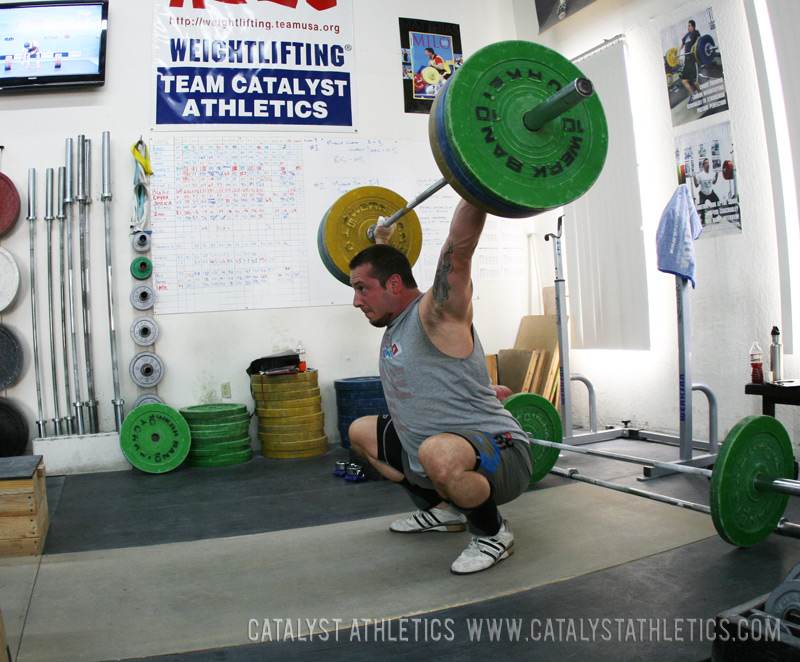 Ooohhh, this is a good question. Weightlifters and coaches have been debating it for a long time. Let me give you a little more explanation so you know what we’re talking about.

You’ve probably already figured out that there are many different training programs and methods out there. Not all lifters train the same. Hell, not all world champions train the same. A lifter from China wins the Olympics and breaks a world record using a certain type of training program, while another lifter from Russia does the exact same thing in a different weight class and his/her program is vastly different from what the Chinese lifter used. This situation makes it complicated for rookies and intermediate lifters because they’re trying to develop their own training regimen, but they can’t decide who they should listen to and emulate. Everybody wants to learn from the best, but the best don’t always do things the same way.

I’ll focus this on two different approaches:
- Method A- This is where the athlete trains by concentrating almost entirely on the snatch, clean and jerk, front and back squats. The SN and C&J are always done in full competition style, and there aren’t many other exercises in the program. Some people refer to this as “Bulgarian style training” because the Bulgarians dominated the world for many years using this concept as the foundation of their method (there’s a lot more to the Bulgarian program than this, but we’ll just keep it in generalities for this discussion).
- Method B- This is where the athlete trains by using a wide range of lifts and exercises in addition to the full competition lifts. In a program like this, the lifters concentrate on the SN and C&J but you’ll also see a lot of things like snatch balances, lifts from the blocks, push presses, three-position lifts, overhead squats, set/rep variations, different types of pulling exercises, etc. In other words, there’s a lot of variety. The Chinese have become known for this. You see all kinds of freaky stuff when you watch them train.

First, let’s answer the basic questions:
- Which one of these is the best method? Neither. They’ve both produced Olympic champions and world records.
- Which one is used most commonly among the top programs in the world? That’s difficult to answer. Most of the top countries find their own ways to blend both methods together.

Now, let’s look at some positives and negatives:
Method A Positives:
- Simplicity, total focus on skill development in the competition lifts and increasing strength in the squats, little chance of wasting training time on exercises that don’t prove to be valuable
Method A Negatives:
- Monotony, possibility of athletes getting bored and mentally deadened because of the lack of variety, possibility of missing out on an auxiliary exercise that could be helpful
Method B Positives:
- Variety, taking advantage of multiple exercises to develop different parts of the athlete’s body/technique, fun for the athletes to try a lot of new things
Method B Negatives:
- Potential for insufficient focus on the full competition lifts, possibility that assistance exercises could actually create more technical problems with the athlete’s SN and C&J

Universal Laws of Weightlifting:
- If you’re a competitive Olympic weightlifter, the only thing that ultimately matters is that you’re improving your technique and competition results in the SN and C&J. That remains the bottom-line priority, regardless of the strategy used in training.
- If an athlete is talented enough, they can probably be trained using almost any method and they’ll still make progress. They’ll be successful because they have more ability than everybody else, and that ability will override the details of their training program.

General Thoughts:
- One of the risks of Method B is the possibility that the athlete’s program becomes a system of constant experimentation and adding new things. Prolonged, consistent focus on the full competition lifts gets neglected because everybody is so excited to try some new exercise they saw on YouTube. Eventually, you’ve been training for a long time and you’ve tried every new idea known to man…but your competition total hasn’t gone up. That’s not good.
- Method A can get boring for some people. In the United States, it’s possible to lose athletes when they get bored. Americans have so many options available that it’s easy for them to walk away from weightlifting if they’re not enjoying it. In communist countries, the athlete’s boredom and happiness aren’t considered important factors. Training is their government job, and the government doesn’t give a crap if they’re having fun.
- I trained a young lifter who qualified to compete in this year’s Youth World Championship using Method A. For almost two years, her entire training program consisted of these exercises:
o Snatch
o Clean and Jerk
o Front Squat
o Back Squat
o Rack Jerk
o There were a few short time periods where I used some assistance exercises to clear up technique problems she was developing, but nothing extended. Using only the exercises I listed above, she became the #1 under-17 lifter in the US in her weight class. So it definitely is possible to train American lifters with Method A.

Where does this leave you?
This leaves you in exactly the same position as everybody else who decides to pursue this sport. You have to study as much as you can, start your own program (or your own lifting career if you’re an athlete), and develop the method that’s right for you.

NOTE: If you’re an athlete, your best chance of success is being guided by a proven successful coach. Don’t try to go it alone when you’re new or intermediate, unless you don’t have a choice.

You might be in a position where you’ve been an athlete in a highly successful system, and your coaching method becomes largely based on that system. If so, that’s great. If it ain’t broken, don’t fix it.

Regardless of all the details, remember that it takes a long time and a lot of work to master this sport. If you’re still relatively new, you don’t have it all figured out. You might think you do because you've got a lot of self-esteem and confidence, but you’re not an expert yet. You have to pay a lot of dues and build up a big resume before you get to have that distinction.

It’s complicated, and it’s a long way to the top if you wanna rock and roll. But you’ll get there if you do the right things. How do you know what “the right things” are? You don’t…not exactly. You have to work to figure this out, just like the rest of us.

steve loeding
I like method A - with mixing up of different rep / % schemes. I'm not a world class lifter at all - but I like it simple and I like doing the full lifts and pulls. For me - simple is better. I change my programming throughout the year based on my needs, but always the big 3 - C&J, Snatch, Squats ( and pulls ).
Greg Everett
I prefer method C - curls, incline bench and shrugs
Fred
Re: method C - don't forget hack squats, bro.
Fred
Jokes aside though, as someone who doesn't have access to a coach I've found there to be a kind of ebb and flow of both of the methods Matt describes.

When I first started about 7 months ago, I found it incredibly useful to stick to a method A-style program, following Pendlay's beginner program (Greg's seems great too, I just wasn't aware of it until I'd already committed to the other one). This went fine, but became boring and a little hard to program once I'd started hitting strength limits. So I began working through some of the more B-ish programs here (front-squat emphasis, strength-by-feel, etc.). As someone who's uncoached and not directed at competition just yet, it's been a good transition.

Paleo Vegetarian Athlete
I prefer CrossFit!! Weightlifting is for sisis.
Justin Tugnate
To be honest, and I think that I may be a little on the weird end of the spectrum here, the only times I get bored training are when I'm not doing the three main lifts.
scott
The blog brings up three important points in relation to training (in any sport). First, this is no ONE way to train (any sport) as there are to many (different) variables with any one person, even in a minimalistic sport such as WL. Second, dont try to copy the pros, in this case the Bulgarians or the Chinese. You are not them, again a different set of variables. Lastly, when deciding on method A of B, the shift or conversion from A to B should be "needs" based. The inclusion of movements other than CJ & S should be intended to de-limit those that are limiting you. Those limting factors may be strength, speed, mobility, technique, timing, or something else that is holding you back. To train properly (intelligently) one must train backwards, from an intended or desitred result.
Brandon Green
Hello

I agree mostly with the last poster- Scott. The body adapts in principle to all stimuli. I don't believe it's psychological boredom that's the problem with program A so much as it's "neurological" boredom (adaption). There are only a few people that can do a narrow range of stimuli and adapt sufficiently to be on a world class level.Soviet coach Plukfelder(Alexeev and Rigert) had programs that changed on a daily basis.