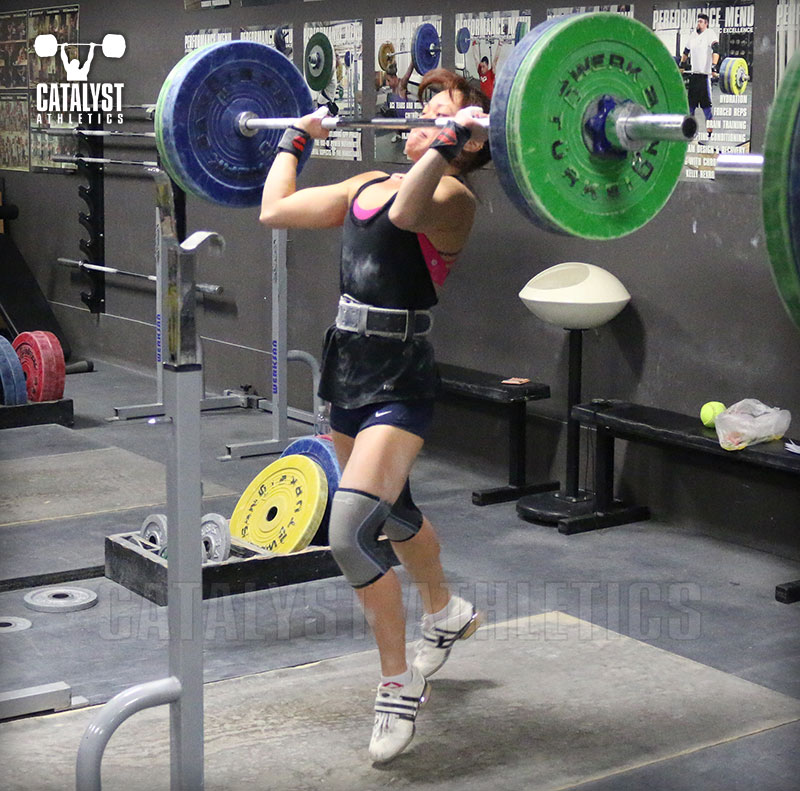 In the spring of 1993, I was snatching 120 kilos (264 lbs). I was twenty years old and I had been training as an Olympic lifter for about three years. In my workouts at this time, I was usually doing my snatch pulls with 135-140 kilos. This weight was so heavy…I wondered how the hell I would ever be able to snatch it. It felt like I was trying to drag the Titanic off the floor of the ocean.

This is good progress, but it isn’t exceptionally rare. I’m telling you about it to make a point; if you’re a newbie, this is what you can and should expect. There will be a great time period in the early years of your career when you’re setting new PRs almost constantly. You’ll be clean and jerking a certain weight, and then a year later you can snatch it. This is when you feel bullet-proof, invincible…like the weightlifting gods sent you to this earth to spray your awesomeness all over everybody.

If you don’t make this kind of progress in the beginning, that’s a problem. There could be a few possible reasons why:

A) You might be training wrong- Improper programming, not enough emphasis on technical skill development. If you (or your coach) are one of those people who thinks you’re going to make progress in the OLifts by focusing on heavy squats and deadlifts, your progress will be slower than the people who practice the competition lifts a lot.
B) Spreading yourself too thin- You’re trying to be an OLifter at the same time you’re trying to be a triathlete, Crossfitter, dwarf tosser, or whatever. If you want to be a jack-of-all-trades, that’s fine. But you have to accept that you probably won’t make amazing progress in the OLifts. You’ll get some improvement, but not as much as you want or expect. This sport is hard enough to master when you’re devoting full-time focus to it. If you’re part-timing it, you’ll never make it to the top.
C) You’re a crusty old geezer- Maybe you decided to start Olympic lifting when you’re not exactly a young tiger anymore. You’re at an advanced age, your joints don’t bend very well, you have an enlarged prostate, you read a lot of online articles about Botox, you sometimes crap your pants a little without being aware of it, whatever. I love it when people decide to become weightlifters in their older years and I think it’s one of the best things you can do, but you have to be realistic about the progress you’re going to make. It probably won’t happen as fast as it will for a teenager (but don’t get discouraged and quit because of that).

Still, you’ll probably make a lot of improvement even if these things are true simply because you’re starting from the bottom and you have nowhere to go but up.

Enjoy these PR bonanza days, because anybody with long-term experience in weightlifting knows exactly what I’m gonna say next…

You’ll hit a wall at some point. As my coach used to say, “You start reaching a point where you have to work twice as hard to make half as much progress.” This is the best statement I’ve ever heard to describe those time periods when the PRs start to get fewer and farther between.

When you reach this phase, your frustration will get pretty hot. I recommend that you find something you can hit regularly. A punching bag would work, or maybe a small child who doesn’t show much potential.

A lot of people want to start changing everything when the progress slows down. They think, “What I used to do isn’t working anymore, so I need to do something different.” Sometimes this might be true…but sometimes it isn’t. When your PRs start getting higher and harder to beat, it doesn’t necessarily mean your program is wrong. You can easily get sucked into a pattern where you’re constantly changing how you do things, and that’s not good. You keep wanting to rearrange your technique or routine because the previous change didn’t lead to any improvement. Before you know it, all you’re doing is jumping from one rock to another. Having good coaches and actually LISTENING to them can make this a lot easier.

I once heard a coach say, “Everything works, but nothing works forever.” I disagree with both parts of that idea. There are some things that clearly don’t work, and there are also things that definitely work forever. Trying to become a better Olympic lifter by using all the newest strength fads you read about on the internet doesn’t work. Mastering the technique of the full competition lifts and improving your squat strength works forever.

Here’s a little thought about making progress. Have you ever chopped down a tree? It didn’t topple to the ground the first time you hit it with the axe, did it? Nope. You had to keep swinging and whacking at it, over and over and over. It took a lot of blows to knock that damn thing down, but you finally did it. You might have had to make a few adjustments while you were doing it, like changing the angle of your axe swings or adjusting your grip on the handle. But it basically came down to simply putting in a lot of effort over a long period of time. That’s how weightlifting works, jack.

Teddy
I'm 39 yrs old and I became interested in oly-lifts around half a year ago. I have bodybuilding / powerlifting background and somehow I found it boring so I attended to course of oly-lifts for adults and a whole new world opened to me. Now I'm thrilled about technique drills, mobility, stretching, conditioning etc - there's so much to learn and train in order to support my new hobby. I can lift reasonable weights (bs 130 kg rock bottom, fs 110 kg, press 70 kg, bench 110) so it's more technique training for me at my age but still enjoying when I hit new PRs and that's rather often actually. I wholeheartedly recommend oly-lifts, despite if your age. There's so much fun and so much to learn and it really keeps you fit. No mirrors, no machines, just the barbell and results! PS: Thanks for this website! This is amazing and so much support for this training. Thank you guys, keep up good work with this!
Eddie S
I agree with Teddy and I am 52.

Alisha
Nail on the head, Coach. This couldn't be more true. Hope you are freeing up some time for me in about a month :)
Steve G
47 now, started lifting as part of Crossfit about a year ago. This article is right on the money. The first 7-8 months were one PR after another. Now they aren't nearly as frequent, nor as large, as they used to be. In my mind, that makes them even sweeter when they do happen...
I will gripe about one part of this article--I know the 20-somethings at my gym will read this and start using paragraph "C) Crusty Old...." when they talk to me....
That's ok, I'll just smoke 'em in the WOD and smile as I change my pants.......

Daniel Smith
Awesome article! I am 26 and just started my Oly Adventure a year or so ago! Being a distance runner and triathlete all my life, i barely had any strength to lift the barbell let alone weighted. Now i am sitting on a 205# snatch and 265 CnJ. Really pumped and hope to qaulify for the open next year. Every time i read your articles i just want to lift someting, maybe my desk and chair @ work!!!
German Dave
Great article. I could not agree with you more. One thought perhaps for people that do hit the "wall". There is more to weightlifting then just the weights and strength. Technique is equally important and for those who get a bit frustrated on those days where it just feels so impossible to hit the numbers they were aiming for - focus a bit more on technique development. You might just enjoy making progress with your technique and it will help you later when you have a great day and feel strong.
Matt
I'm 24, started Oly W. only recently (2 months ago actually) and programming by myself, in the first month I was able to PR 10 kilos more in the snatch, which now is 70kg, and c&j 86 kilos, which is 16 kilos more of my previously PR. I'm in 69 category,
I really want to succeed in this sport, I need at least 130-110 to qualify in the first 5 spots in my country, I know it's kind of a stupid question but based on your experience do you think it's doable in only 1 year of training ?
Anything is possible! Good luck with training!