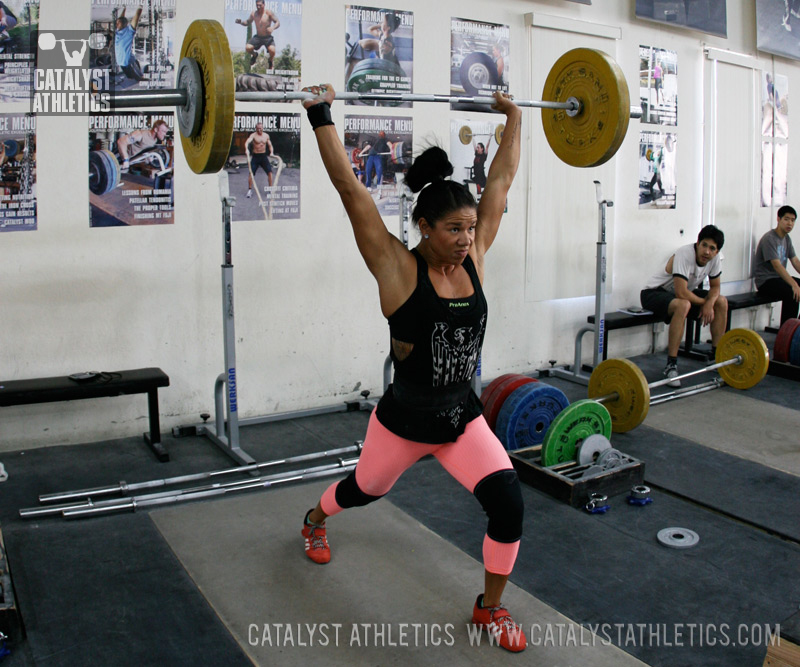 We were talking about building great technique in my last blog post, and I used the phrase “disgusting mutant CrossFit power snatch technique” to describe what it looks like when you do the OLifts incorrectly. I’m glad everybody understood what I was saying, and why I said it. Obviously, I wasn’t slamming CrossFit. If anybody took it that way, they missed the point.

Many people do the OLifts with ugly technique. In CrossFit, this is common (and understandable) because of the lots-of-reps-as-quickly-as-possible nature of WODs. Technical precision isn’t the main goal in these situations, so the movements often get sloppy. Most of the CrossFitters I’ve worked with are totally aware of this. And it’s not just a CrossFit thing. You see bad form everywhere.

Fortunately, many people decide they want to change this. Sometimes they decide to become competitive OLifters, and they know they have to master the technique of the SN and C&J to be successful. Other people don’t want to compete in weightlifting, but they still want to sharpen up their movements because they know it’ll help their performance in other sports. And then there are people who want to improve their technique simply because they want to do the damn lifts right.

When athletes make this decision, they usually seek out a specialized expert in the OLifts to work with them. It’s a lot like calling a repairman to fix a broken appliance in your house. This is the right way to solve the problem, by the way. CALL A PROFESSIONAL! If you ask an inexperienced coach to repair your technique, it’s a lot like asking your dad or husband to fix your busted dishwasher. Dad is probably a handy guy, and he means well, but fixing dishwashers isn’t his specialty. He’ll probably rig something together with duct tape, super glue, and some other white-trash patch-up techniques that don’t really “fix” the problem. They just keep it from collapsing for a little while longer. Remember, we’re still talking about your OL technique. And you can’t truly repair anything this way. You can pour syrup on a turd, but that’s not gonna make it a pancake.

If you really want to get that sucker 100% fixed, swallow your pride and call a pro to take care of it for you. If Dad is a smart guy, he’ll figure out that this isn’t a slam at his ego or ability. It’s just common sense.

Let me tell you the best method I know for fixing an athlete’s crappy OL technique:

Step One: Strip the bar down to nothing and TEACH the lifter to move correctly. This is harder than it sounds, but it can be done. You’re basically just starting over from ground zero. Forget about weight and concentrate completely on correct movements. Great athletes will catch on quickly, and average athletes will take a little longer.

Step Two: FORCE the athlete to spend a long time working with light weights so they actually start to memorize the proper form. If you go through Step One and then you start letting the athlete attempt max weights again too soon, they’ll quickly revert back to their old mutant technique. The athlete must work with light-moderate weights for an extended time to solidify the things you taught in Step One.

Step Three: Let the athlete slowly and gradually add weight to the bar, but stay on top of them and make sure it still looks the way it’s supposed to. If you see that mutant technique returning, back off and get it right again.

How light should the athlete go during Step Two? And how long should they practice before they start adding weight in Step Three? It depends on the athlete, obviously. I’ll give you a real-life example from a lifter I’m currently coaching:

- This athlete was snatching 103 kilos (about 225 lbs) with mutant technique when we started working together.

- We went through Step One in the first workouts, and we got his movements corrected and fixed.

- I told him he couldn’t go above 70 kilos (154 lbs) for a month, focusing completely on ingraining the fixed technique we established.

- After a month of working around the 70 range, we moved his level up to 75-80 (165-176 lbs) kilos for six weeks, regularly checking to make sure the movements still looked right.

- He followed the plan, and then we moved up to 85-90 kilos (187-198 lbs) for a month. Technique was still correct and efficient, no trace of the old mutant stuff coming back.

- We spent a few weeks before his first competition hitting around 95-100 kilos. By this time, his technique was on cruise control and we rarely hit any sloppy reps.

- Then we went to his first weightlifting competition and he snatched 103 kilos, which matched his old mutant PR. But the 103 he did at the meet was clean, correct, and snappy.

Now we’ve reached a point where the athlete has worked back up to the top weights they were hitting with their old mutant technique, but they’re doing those weights correctly. And we have two new advantages:

2) The opportunity for the athlete to go way beyond their old PRs. That’s really the point of this whole thing. Max weights are going to be limited with mutant technique, and everybody knows it. But with the repaired technique, we’ve got a shot at 15-25 lbs more in the coming months.

THIS WORKS. But there are two things that can screw it up:

1) The repairman doesn’t know how to teach the movement properly during Step One.

2) The athlete doesn’t have the discipline to hold back the weights and trust the process during Step Two. Instead of forcing themselves to work with light weights to develop their technique, they fly off the handle and go back to maxing out all the time.

It’s tricky business, brothers and sisters. You have to see it as a long-term project and you can’t rush things. If you’re willing to take the plunge and do this, it’ll change your whole career. If you’re not willing to do it, you’ll just have to remain the King (or Queen) of the Mutants.

That’s not what you want, is it? To be the top freak in the circus? I didn’t think so. Set up an appointment with a real weightlifting pro in your neighborhood, and tell them to bring their toolbox.


5 Comments
Marcos U.
Thank you for the reminder!
craig
thanks for the article. would you post some videos or a link to some videos of mutant lifts? i am curious how sloppy the technique must be to qualify as mutant and necessitate a return to the empty bar. thanks!
Mike
Great way to realize how long it takes to create an engram. It reminds me of Shane Hamman saying when he transitioned from powerlifting to weightlifting he practiced with a broomstick for 6 weeks! This guy could squat 1000 pounds and wasn't allowed any weight for 6 weeks! I get impatient when I have an ache or pain that reduces my weight for a week.
Fred_A
Why do you apologized each time you reference crossfit in the negative?

do you get phone calls from that fat ass greg glasman or something? LOL

Jackie D.
My favorite post ever and so spot on! I started lifting less than two years ago with well meaning, primarily CrossFit coaches who want to be Oly coaches (but aren’t right now). Adding weight was primary and while their broad diagnosis of my lifting errors were usually right, they didn’t know how to fix them. I was so frustrated, but practically miraculously, a real coach, this young Turkish guy who studied under some pretty legendary people, appeared. Just like you’ve outlined, he dropped my weights to basically the bar and with drills and great advice, totally improved my technique. We are slowly adding weight, but if I fall apart, back down it goes until I’m solid. There are lots of lifters at my box who are so stuck, but won’t tear it all down because of ego, laziness, etc. I don’t care; I want to do it right and I know if I do the work and trust my coach and the process, I’ll get where I want to be. A nice little validation happened recently. A guy who trains with a well known coach was a guest at our gym when we had a training session. This guy was hitting lifts no one there could touch. I was resting between lifts and he made it a point to say to me, “Your last couple snatches were pretty much perfect.” I seriously almost cried. It was worth everything.