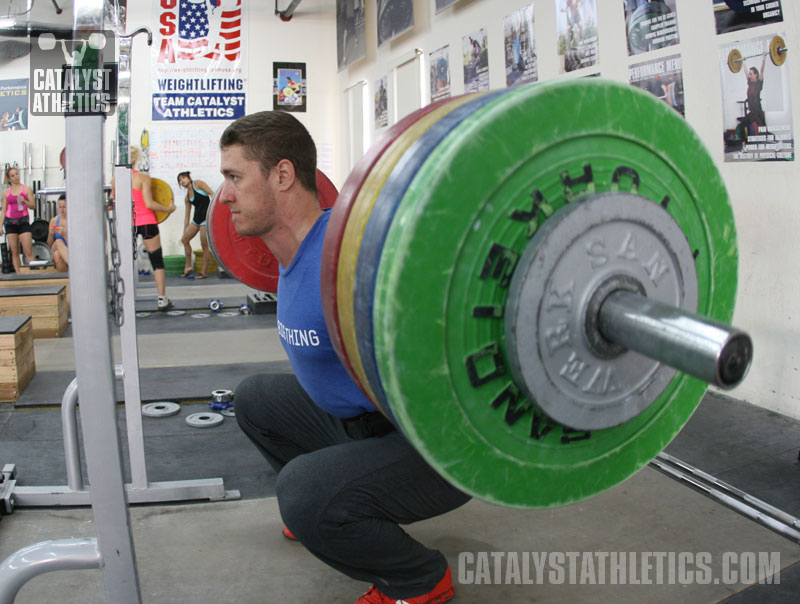 I’m gonna kill two birds with one stone in this article. Lately, several people have been asking me questions about a training topic that I’ve mentioned briefly in conversations, Facebook posts, etc. I’ve been promising these people that I would give them some ideas and input through e-mail or phone calls. But since I have about 23 minutes of free time each week, I haven’t followed through. These people are probably all thinking I’m a butthole because I’m ignoring them, so now I’ll have one of those moments when I prove I’m as sweet as warm muffins. I’ll just write a blog post about it for everybody.

First of all, this is a topic I wrote about in my book Bones of Iron. Those of you who have read it will recognize the subject. For those of you who have made a conscious decision to live an unfulfilled life by NOT reading my book, this might be new stuff.

Let’s get to the point. As you know, most of the things I write are specifically directed at competitive Olympic weightlifters and people who focus their training (or coaching) on the Olympic lifts. I don’t write much about things like squats, deadlifts, pressing strength, etc. However, that’s the area we’re going to look at here.

If you’re an Olympic weightlifter, the main priority in your life is improving the competition lifts (snatch, clean and jerk). Everything you do in your training is designed to accomplish this. But many of you have a slightly different focus. You train the OLifts and they’re one of your main priorities, but you also want a program that will increase your squat and deadlift. Those lifts are important to you, and you want to set new PRs in them.

Now, here’s what a lot of people do. When they’re looking for training ideas to improve their OLifts, they seek out OL experts and try to learn from them. But when they want ideas for improving their squat and deadlift, they seek out powerlifting experts. There’s obviously some sense to this because powerlifters have complete focus on the squat and deadlift since those are their competition lifts (along with benching).

This is where an interesting point comes into the mix, and this is the topic people have been asking me about. You see, a training program that is mainly focused on the Olympic lifts is one of the best ways to improve your squat and deadlift. We’re talking about a program that’s not directed towards training the SQ and DL as top-priority competition lifts, but nevertheless it will lead to drastic increases and personal records in both of them.

I’ll give you an example of the type of program I’m talking about. This is very basic skeleton of a program I would use for athletes who want to mainly focus on the OLifts (CrossFit-type athletes, strength generalists who lean towards OL as top priority, etc.):

A few points to remember:

1) This is just a basic outline. Obviously there are no sets, reps, or percentages. We don’t really need to look at those things for this discussion.

2) This is a four-day per week program that would work best for somebody who is basically focusing all his/her efforts on weightlifting. I coach a lot of Crossfitters who are on a program very similar to this, but it’s narrowed down to three days because most of them are also doing WODs throughout the week (and most of them are older).

3) Having said that, you could train a competitive OLifter on a three-day per week program and still get incredible results if the planning is strong. It’s been done before.

Okay, so here’s the cool part…

Everybody I’ve ever trained on a program like this has produced tremendous increases in their squats and deadlifts (myself included). As you can see, squatting is treated as an assistance lift. It comes at the end of the workouts, after the OL-specific stuff has been completed. There are no actual deadlifts on the program (PL-style deadlifts with alternating grip, etc.). Despite these factors, a program like this can drive your SQ and DL to new heights.

There are a couple of reasons for this. First of all, you’re squatting hard three times a week (you could do two times if you used a three-day program). In addition to this, the athletes perform some kind of a squatting movement every time they do a snatch or clean. So, in a nutshell, there’s a lot of squatting involved.

Second, most of the lifts on the program are pull-related. All the competition lifts and assistance lifts involve pulling.

So the athletes are developing a lot of what I call “accumulated strength.” This is the idea that even though you’re not centering your program around squats or deadlifts, your squatting and pulling strength are increasing simply through lots and lots and lots of reps.

They don’t even have to be maximum heavy reps, either. I started out my career as a powerlifter and I had a deadlift PR of 555 lbs before I converted to OL. I then spent years training 100% Olympic weightlifting (using a program very similar to the one I outlined above). The heaviest pulling I did during those years were my clean pulls with around 450 lbs, never anything heavier. Then one day I decided to try a deadlift max just for fun, and I pulled 650. This isn’t uncommon. Many of the athletes I coach will pull DL maxes occasionally with no real DL training, and they break their PRs all the time. Same goes for the squats, despite the fact that we use it as an assistance lift and rarely push heavy max singles.

Please don’t misunderstand what I’m saying here. I’m not trying to make some kind of “OLifters know how to get strong better than powerlifters do” argument. That’s not what this is at all. But I am definitely saying that an athlete can develop high-level squat and deadlift strength through the use of an OL-focused program. I see proof of this all the time. If you try it, you will too.

Manny O
I've seen this first hand myself. I'm a triathlete that utilizes weightlifting as strength training. I'm not putting up any huge weights but last week decided to try and see if my 1RM had changed. Went up 15 lbs in DL and front squat and 20lbs in back squat. Last tested last summer. Since last race in October (Austin 70.3) have been in the gym using CA online plan only with some little rides, runs and swims here and there.
Rob L
Great article. You refer to the 3 day template a few times in the article, for example "but it’s narrowed down to three days because most of them are also doing WODs throughout the week (and most of them are older)."

I fit into that older demographic. ;-)

Matt Foreman
Hey Rob,
This is what I'm using with my Crossfit class right now:

TUESDAY
- Snatch
- Cleans from hang above the knee
- Front Squat

Eric- I would do pullups/chinups on one of your lifting days, simply because I prefer my rest days to be true REST days. Others might do it differently, which is fine. Just my two cents.
Greg Everett
Mike -

I'm with Matt on this. If the clean is your focus, quit worrying about your DL max. Get your clean up. My lifters never train the dead lift. I personally haven't done a dead lift in probably 5 years.
Mike Daley
Matt and Greg- appreciate it guys. Ill quit worrying about it and continue to drive forward with the oly lifts.Thanks again!
Cameron Ball
Very interesting article. I think it follows the less is sometimes more model. I see so many get bogged down on these crazy squat cycles that hinder their other training (most older). I like, and have used myself, the idea of squats as an assistance exercise to the Oly lifts. As someone who coaches both weightlifters and CrossFitters I can definitely see the benefits of this. Thanks for sharing!
Frank Barosky
Make a comment, verified, and it didn't accept. Testing to see if the will go
Frank Barosky
I had the same experience with the deadlift. I started Oly lifting in the early 1960's. In the mid 60's switched to powerlifting since I lived in an area where it was very popular. As soon as I switched I was immediately very good at the deadlift (conventional) even though I have short arms. I never really trained the actual deadlift. My deadlift training consisted of power cleans and hi pulls. Once a week I would load the bar about 100 lbs above my hi pull weight, pull the bar to just below my knees, stop, count to 3, and then pull as fast as I could to a hi pull. My best competition deadlift was 590 lbs at 163 lbs bodyweight, which was very good at the time.
Josh
What sets reps and percentages would you recommend or is that available somewhere on this site
Steve Pan
Josh -

The Workouts section above has programs and descriptions you can check out that are percentage based.
Ted
Great article! I'm a master on my 40s, training pretty much same:

As you see the jerk and overhead strength is my weaknesses which I try to work on. I also prefer fs over bs.

Many thx for your site! It's awesome!