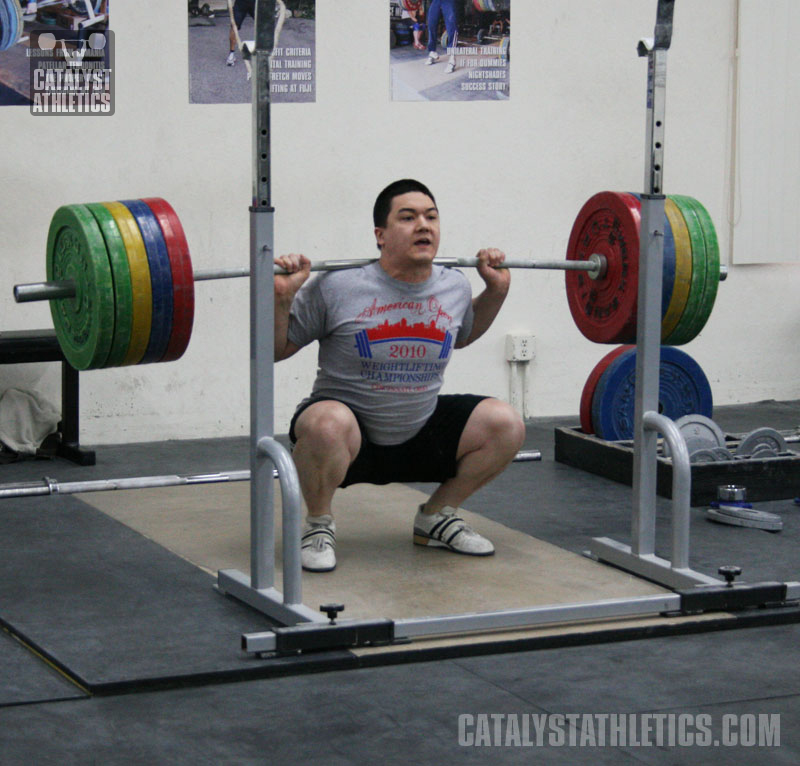 See more articles & videos like this in the Weightlifting Squat Technique collection.
Evidently the most popular term on the internet right now is “valgus”. The legions of keyboard warriors and Facebook coaches have latched on to it and are sanctimoniously eviscerating anyone demonstrating valgus knee movement in the squat, irrespective of the context (e.g. an experienced competitive lifter pushing a maximal effort) and, as is to be expected, irrespective of their own qualifications to opine on the subject. I shouldn’t be surprised, and I suppose I’m not, but my lack of surprise doesn’t mitigate my irritation by the practice.
This was brought back to my attention last night when my lovely wife Aimee posted a video of a few of our female lifters squatting. There was a range of degrees of valgus knee movement, from pronounced to minor, and a number of comments were posted in short order about how terribly these girls were squatting (all of whom are competitive in the sport of weightlifting at the national championship level and who are members of a multiple-time national medalist team).
What We Want
In my books, articles and elsewhere, I have explicitly and emphatically stated that what we want to see in the squat is the thigh and foot aligned; that is, we want the knee neither inside nor outside the corresponding foot. Some minor divergence is probable in many individuals based simply on imperfect anatomy, but the goal is to maintain the proper hinging of the knee without introducing odd torque or other forces it’s not well-equipped to handle.
We want the feet turned out to some degree to open the hips adequately to allow the lifter to sit into full depth with an upright posture. To what degree the feet must be turned out to achieve this is dependent on the body structure of the lifter (and to some degree that lifter’s mobility, although this is a temporary limiter that should be addressed and corrected). Some will need to turn out very little, maybe 5-10 degrees, and some will need to turn out more, possibly as much as 20-30 degrees. Generally speaking, shorter-legged athletes will feel comfortable and be able to achieve a proper bottom position with the feet turned out less (consider this when looking at “proof” that the feet and knees don’t need to be oriented outward using Chinese lifters as models). When looking at a lifter in the bottom of a squat with such a stance, if the thighs are approximately parallel with the feet, the knees could be fairly described as “out”—that is, they are not oriented straight forward. However, the knees being out and being pushed out are two different things. 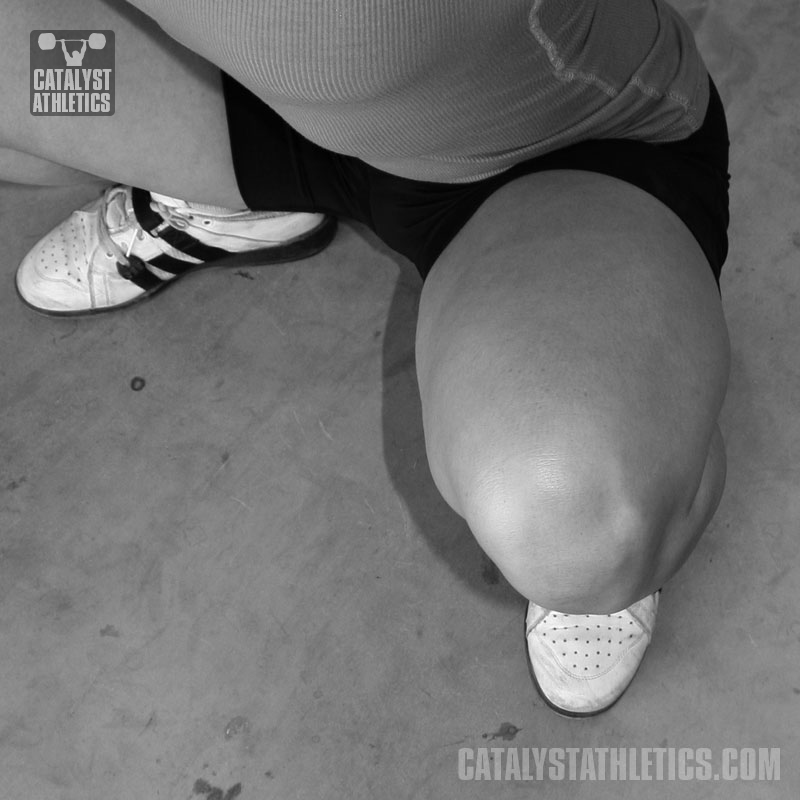 The ideal alignment of the leg keeps the thigh approximately parallel with the corresponding foot; the knee is neither inside nor outside of the foot.

See more articles & videos like this in the Weightlifting Squat Technique collection.

Jordan Caras
Greg -
I have to wonder if the popularity of "valgus" is due to Kelly Starrett's book (Becoming a supple Leopard). At least in my few years of crossfit, and my new interest in coaching, this is the first place I have seen it extensively used to the point that droves of people would pick up on the lingo. Just a theory ;)

Thanks for your wisdom!

Nick Sanders
I agree this has become a hot topic of late due to Starrett's book. Everyone throws inwards knee movement in the same category. I feel there is a huge difference in the super stiff male that can't get into a good bottom position due to mobility and your female who kicks in briefly out of the hole. Assess and correct appropriately for proper movement

Marcos Ubilla
Jordan, he has also increased the word soup rankings for "torque", "smash" and "floss" with respect to mobility and movement.
Sean
Greg, thanks for our insight. I'm glad that you took the time to clarify the difference between a 'coaching cue' and a valid movement error.
A coaching cue doesn't live in a vacuum, and a single cue will mean something completely different to each athlete.
I couldn't agree more that there has been a flood of armchair quarterbacks throwing around the latest buzzword.
I'd be will to admit that K. Starr and his nuclear explosion in popularity may have contributed to the word vomiting going on, but hasn't always been about how the knowledge is applied? It's not enough to simple reverberate terms, you have to understand the application of those terms and their intended benefit.
I mean, aren't we all here to learn?
Thanks again for all that you have done and continue to do. I continue to benefit from all your and your teams efforts.
Ryan Merrill
I might be a terribly person but I love reading others bashing others over the internet =)! Not that I ever really get involved 7 years of World of Warcraft taught me better.
daooch
Though I can see Starrett's book shining a brighter light on the issue of functional knee valgus, it's actually been quite a concern and point of emphasis w/ most rehab professionals and physical therapists. (Of which Starrett is well-versed). As much as generally love Crossift and know many high-quality coaches, I kinda wish the culture had more of a biomechanical rehab background or perspective. And in re: to PTs and rehabilitative biomechanics - vice versa!
Chad
Hey Greg, I'm a fairly new lifter that's basically self coaching myself, through your website and your book (which is a fantastic read by the way). I can only imagine how frustrating it is to be second guessed and bashed by all of the no doubt national level lifters inhabiting facebook and the rest of the internet but I just wanted to say that I'm on your website almost daily and I appreciate all the effort you put into getting as much knowledge, and free knowledge at that, out into the amateur weightlifting community. Big thanks to you and to everyone who contributes to your website. Keep up the great work
PJ
Good stuff.

Most of the research (concerning medial knee displacement in women specifically) points to all of the the things you have mentioned but also points out that motor control may be the main issue in keeping the knees out. Unfortunately there isn't much research into the motor control idea...

I've had success coaching athletes to help correct the valgus knee issue but everything goes out the window when we go from something like the squat to a more "dynamic" movement like a jump (high, long, box, etc) where the problem comes right back.

Has anyone seen this?
Greg Everett
PJ -

The slower, more deliberate movements (e.g. squats and remedial exercises) should set the pattern for the more dynamic ones (e.g. jumping and landing), but the transfer will take longer, I believe. For example, you'd see improvement in a clean before you saw it in a jump. Doesn't mean the corrections are working or won't work, it just means they need to be continued for a longer period.
Zach
"Generally, the longer-legged and more female an athlete is, the more likely the tendency for valgus knee movement in the squat."

"more female" didn't realize there was an in-between lol
Tj
I'm one of those "longer-legged females". I love lifting, but sometimes feel like progress is slow, particularly with this problem. Thanks for writing about it, including some easy to follow homework. I feel reassured that I will make progress on this!
Eric LaRue
This is a new pet peeve of mine.
I tore my pectineus, obturator externus, and rectus abdominus trying to apply knees-out as a standard. That was my fault for tweaking my LBBS form using an 80+% load.
It is not even a general cue, like hips forward or chest up.
It should only be used as a corrective cue for a lifter bowing the knees in, above parallel, in my opinion.
Movement standards, general lifting cues, and corrective cues are three very different things.
The experts need to clearly communicate which they are talking about.
Without that kind of differentiation, you will have idiots like me hurting ourselves.
Josh
As always Greg, your posts are well thought out, very informative, and well respected! Your talk with me regarding this subject during your cert course has helped me draw a better line when explaining this to clients or "challengers".
Tim
Gregg so would a good reference for foot angle be to squat with feet straight; then turn feet so that feet are aligned with femur? I am 6'1 with longer femurs than shins. Unless I rotate my feet pretty far out I have weird torque on my knee. However, I feel it's not a flexibility issue. Should this be corrected or just go with it. Thanks in advance and your site is greatly appreciated!
Greg Everett
Tim -

Hard to really comment without seeing you. You could be fine, or you could be horribly off. Really doesn't matter where you start to find a good foot position, but I don't see a point in starting straight forward - you know you're not going to be there anyway. Just turn your feet out to whatever degree feels comfortable and use that as your starting point.
Tim
Gregg-
Thanks for the prompt reply. The more and more I read your articles the more I learn. Foot angle aside; I think my problem has been bending my knees without keeping the weight on my heels. I noticed that when I squat and the knees bend the weight shifts to the toe. So ankle flexibility? I feel as I am compensating for limited flexibility by shifting weight forward. I also am now focusing weight kind of on the outside edge of foot; if not correct please advise. Last thing, with cleans today really focused landing on heels and felt like I was going to fall on my ass, however, I didn't and it felt pretty smooth. Is this the feeling I should look for? Once again, thanks for your advice and professionalism.
Greg Everett
Tim -

You shouldn't feel like you're falling backward - you should only have slightly more pressure on your heels than on the balls of your feet. The way you describe it, it sounds like your weight is shifting forward well above a low squat, which suggests ankle immobility isn't the culprit (at least at that stage). Also almost falling backward in a clean could suggest limited ankle ROM forcing you to sit back rather than down (i.e. shins are force to remain too close to vertical).
Marcie F
As a practicing clinician i find a active knee valgus position during my movement screening quite often and females more frequently. I have been successful in correcting this with several of your above mentioned exercises as well as the banded side lying leg raise and clam shell. I also use a 2-2-4 tempo and higher repetitions while in the "corrective" phase. I also use these exercises myself as an active weightlifter and have antidotal evidence of their effectiveness especially following a knee surgery 1 year ago.